By: Jamie Gardam
When I first met Julia Cole and chatted to her in London’s West End, the first thing I remember was that even compared to other American’s I had met, her sneakers were so white and so clean. This is a thing that many visitors from across the pond notice about Brits being that our delightful climate means that we can’t quite maintain our trainers to gleam as much as our transatlantic cousins can. The other things that jump out at you are her energy, the positivity that she radiates and her passion for being musically creative but above all real.

Cole, like so many, is a transplant into music city after upping her routes from Texas 8 years ago in 2012 and her sound is very distinct and true to herself incorporating all aspects of her influences from the music scene she discovered growing up in Houston. She has gained recognition off the back of her single “Trust You” and has performed the anthem prior to many major sporting events in addition to playing shows on the road with the likes of Dan + Shay, The Chainsmokers, Jon Pardi, Kane Brown and James Barker Band who she opened up on her most recent visit to the United Kingdom in November last year.
It was back in 2016 when the UK had their first encounter with Julia, when she played The Troubadour in London where her love of music fans over here, the city and our culture has continued to grow and keep drawing her back across the pond regularly. Recently before heading off to Africa (yes I did have to check with her, what I thought she said) we hung out on Zoom whilst she was still in Nashville where she said “I’m not going to say I’m staying out of trouble but I’m definitely going to say I’m healthy” as we had a good old catch up to talk all about new music and what she has been up to.
The crazy world of 2020 has forced challenges and forced changes to our lives and the way we do things not just within the music industry, but our everyday lives. The Cole family has been no exception to this as a return trip to London should have been on the cards at the end of the summer for the wedding of her older sister (who has now relocated to London) which unfortunately has had to be postponed due to the pandemic whilst her younger sister is an elite athlete at Duke University in North Carolina who has postponed study due to not wanting to give up eligibility without competition. Though for Julia herself in Nashville, the time off the road has brought about a number of silver linings as she has endeavoured to stay positive:
I feel like I never really got too down, a lot of my shows were cancelled then the first initial sadness and fear of what is going on happened but that ended pretty quickly once I realised ok this is the reality for everyone, not just me and everyone is going through this so let’s find some silver linings and make the most of it! I’ve managed to still have a really productive and beneficial year, I was touring a lot but there was also a lot of work to still be done on the development side of things like production of music, songwriting a bunch, putting together an EPK video, getting my stats on a one sheet, getting my merch deal with my merch company lined up and tidying up my website. It was a period of six months to just clean house, get ready and organised for things to take off and I think that was really necessary for me. Yes, it was hard to miss out on some of these shows but being forced to get a lot of this prep work done to prepare for a big 2021 is for the best. I have a lot of new music finished, ready to come out and the music that is out now is blowing up right now! It’s really nice to know that I’ve already got follow up stuff ready and a lot of things have been streamlined to prepare for bigger growth, where before when I had been touring it wouldn’t have been as smooth a transition.


Despite the fact that she has been unable to tour, musically this year has been highly successful with her numbers and traction going from strength to strength. I talked with Julia about what the key factors in this were and people having more time and opportunity to give music it’s full attention at face value or whether there were bigger forces at work?
I do think people being attentive on their phones helps but I don’t necessarily think that is why things are going the way they are going. One of the biggest things for me would be TikTok, it is now my favourite social media, it is an organic, unbiased way to reach new people and a way for people to connect with each other with your music. It’s beautiful, I feel I get to know so many of these people and I’m pretty taken back by how much it’s done for my career during this time then also Spotify with its algorithms. The support that John Marks has given and shown me, then there’s this duet that I’ve been doing with my friend Spencer Crandall, so it’s just been incredible the way that everything is lining up timing wise. I’m seeing that patience is paying off because I released “Side Piece” in the spring and it’s just now starting to take off which is crazy to think about but people have to take time to discover it and now they have discovered it on social media platforms, it’s blowing up on streaming platforms.
With the growth of TikTok as a social media platform that was completely new and different so users, for someone that has become so active on the platform it allowed not only the opportunity to reach out to a new environment but also a way to keep herself fresh and engaged:
I think it’s super crucial to not get stuck in your norm, the comfortable zone of just doing what you normally do. That would be me with Instagram, I get Instagram and what to do there, I know how to interact with people etc. Then going on an entirely new platform with zero followers was like pretty daunting but you can’t think that way because that’s when you get left behind as if you just stay with what’s comfortable and what’s old news, if you are not moving on with where the trends of the world are going.
​
At the start of this month, she shared her newest single “Do You Mind” (Available HERE) which she co-wrote with Josh Ronen and really brings out a new variation on her sound with much more of an R&B focus than we are familiar with yet still feels fitting to her and comes out really smooth and clean. In the press release for the single Julia said: “Do You Mind is a much-needed fun and empowering counter-story to the classic “boy-hits-on-girl” country music narrative. This track empowers the woman to take the first step, make the first move, and know she is worth it.” From this standpoint I was keen to explore what else we may come across sonically on other new material.
It’s still in the Julia Cole world, I would say “Do You Mind” is probably the farthest on the spectrum of reaching outside of my norms so all of the next things that you’ll be hearing from me is somewhere in-between “Honey Child” and “Do You Mind” as they all live in that world.
Julia had mentioned that she had been working hard on new music and getting things in order for bringing it out, so I asked her exactly what the plans were for her release strategy in the immediate future:
Right now, we are having so much traction with “Side Piece” and “Things I Can’t Say” so I have three new songs ready to put out but I’m just holding on to them because I don’t want them to get buried underneath these other two that are doing so well right now. It’s a great problem to have so it’s leaning towards 2021 for more of the newer stuff I’ve been working on as I have a Christmas song we’ll push in November and December. It can be almost a distraction from what people should be focusing on first, I do want to put things out as part of an EP eventually but I think introducing each song by its self first and them packaging together is what I prefer.

In addition to working on music and what people will see from her socials, Julia is full of energy. She is fun, spontaneous, adventurous and likes to explore which as she herself put it: “I love to travel, I’m a road dog. You pretty much can’t get me to sit still!” which I suppose may explain why right now she is on her first ever visit to Africa climbing Mount Kilimanjaro:
My best friend has had the trip planned for over a year to celebrate her finishing grad school and her dual masters. I’ve done a lot of crazy things with her like we went bungee jumping in New Zealand, went on the worlds largest swing through a canyon, went zip-lining, horseback riding in Costa Rica, been to Cuba and all sorts of stuff so it was another one of those trips where she said I’m going to do this if you want to come? I was like well we’re insane so let’s do it!
​
When we were talking about this oncoming trip, she was embraced for the cold in Tanzania but the cold and our weather over here was one thing that she doesn’t enjoy about the UK: “Heck No! London’s weather makes me want to cry!” although that apart her love for our country and playing here is evident as she stressed: “I love touring over there! As soon as I’m allowed, I’m there!” 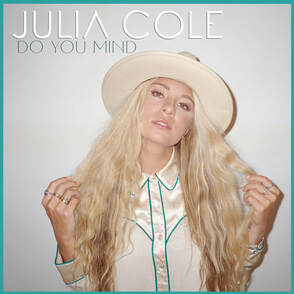 Julia’s new single “Do You Mind” is out now and you can listen HERE on all digital streaming platforms plus you can see all her goings on and keep up to date with her on: Instagram / Facebook / Twitter / TikTok