Following on from his self-introducing EP “Love Makes The World” which was released at the back end of 2020, one of Australia’s most decorated songwriters Andrew Farriss continues his journey into country and Americana with his self-titled debut album which is out today through BMG. (Listen HERE)

Farriss was the founding member and primary composer for one of Australia’s most iconic and globally recognisable rock bands of all time. In the late seventies he joined his brothers Tim and Jon along with Kirk Pengilly, Garry Beers and the late Michael Hutchence to form INXS, who over a touring career of thirty-five years amassed well over fifty million global album sales across twelve studio records. As worldwide pioneers of New wave music, the band received recognition and award nominations from the largest recording industries on the planet including the Brit Awards, Canada’s Juno Awards, The Grammy’s and their native ARIA Awards where they were inducted into the Hall of Fame in 2001.
​
Given the way I have set the background to his career, it will come as no surprise that I am a big fan of his back catalogue and the influence of INXS, my aunt was a super fan so I have digested the masterpieces that he has created to a large extent and as my vinyl collection has grown, their 1987 sixth album “Kick” was always going to be an essential piece of the jigsaw. You see through the purity and magic of their music which Farriss was responsible for writing timeless hits like “Never Tear Us Apart” for example, that this guy really knows how to write great songs and has been doing it for a long time.

Prior to listening to this record there are a pair of things that you would be aware of about a release from Andrew Farriss and both of these convey very strongly. Firstly, this would be lyrically solid as you would expect from a songwriter that has been so successful over a long period and secondly that to take a complete genre shift and perspective, this must be a real labour of love and a project that he was really passionate about. On the project he had shared:
“I am really enjoying stepping out on my own with this album, I love writing songs and telling stories that hopefully resonate with people. I have not followed any trends or formulas creating these songs. What I have written and recorded is different. I like different, different is good."
​
If you are going into this with the view that the band have not toured since the back end of 2012 and this is Farriss bringing you the next fix, that is so far from what you will hear. What you will hear is a raw and honest Americana album that is incredibly well written, it is put together so cleanly and it is a really high-quality record that you want to listen to over and over again because it is so heavily focused on the storytelling and cohesively incorporates a number of melodic sounds.
There are a lot of other authentic flavours through the record that flow perfectly together whether that be bringing more coastal sunset vibes, toe-tapping honky-tonk feels or just deep rootsy sounds that create a really fascinating standpoint of contemporary outlaw country that is a really slick and can be listened to in any scenario. The way the traditional instruments walk hand in hand with the rockier electric elements is done in a way that despite many projects from other artists attempting to achieve this, it is very rare to hear something and cleanly composed and as exciting as Farriss has achieved. The fact this was a project he had sought do for a while really demonstrates this passion and with Andrew producing the record it really allows him to not just say what he wanted but deliver it exactly as he envisioned.
​
Finding the tracks that cohesively fit the album together in a country feel was a natural progression. Many of the songs on the album had been written years earlier, while some were penned during the recording process, to round out the vision that Andrew had for the release. They fit seamlessly together and all embody the country-roots storytelling element that was so important.
“One of the reasons many people have warmed to country music, is that it isn’t just happy songs, it is the sad songs; it is the gritty subjects that some of genres of music won’t go near. That is something that attracts me as a songwriter. I don’t want to chase what train everyone else is on, I want to stay true to what I do as a songwriter, and keep a frontier sense of freedom. When I was putting the album together, I steered away from cliches, plus I wanted to put my own personality in it. If my album doesn’t sound like anyone else, then that is good.”
Living on the land and running a working farm, country music was never far from Andrew’s heart. Yet, it was a chance trip up to the Apache Pass along the Mexican border that set the musical direction for the album. Andrew and his wife, Marlina, spent weeks horse-riding with good friends, cowboy wrangler Craig Lawson and his wife Tamara through the Chiricahua Mountains. The history of the area really captivated Andrew in a way that he wasn’t expecting, from the stories of the tumultuous fighting to the barren beautiful landscape.
“I became quite enamoured with it, it became very real to me. When I went back to Nashville and I continued writing, some people said, ‘let’s write a country pop hit’ and I didn’t want to do that. What I really wanted to do was write about that outlaw country that I just saw and the history of the area.”

The concept of the outlaw and cowboy country resonated with Andrew because it felt like home. He felt there was a trajectory between what he had experienced in the United States, and what he experienced every day working on an inland Australian farm – ‘where Australiana meets Americana’. As a prolific songsmith, Andrew had more than 200 songs already penned when he decided to create the body of work that would result in this self-titled release. Tracking songs in Nashville at Larry Beaird’s studio almost a decade ago, initially Andrew had no thoughts of recording an album, or even an EP.
“I wanted to make the songs sound as good as possible so that I could play them to people, I was more concerned about that than making a record. I realised, when I listened to my voice as a country singer, it began to make sense to me. That’s when the pieces of the jigsaw fell together for me.”

The self-titled debut solo album from Andrew Farriss is out now through BMG, which you can listen to or stream HERE and you can find out more about Andrew on his Website or keep up to date with him on Twitter Instagram & Facebook 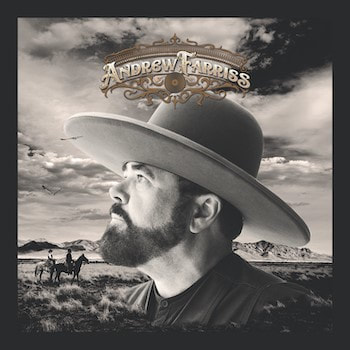