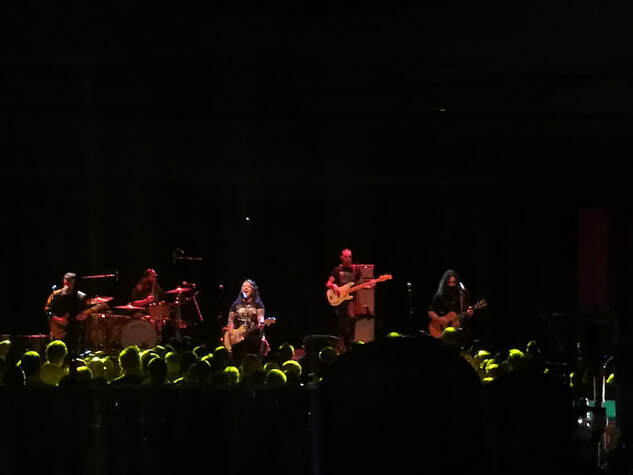 ​It was back at Country2Country in March 2018, just a few weeks before the release of her debut album, that Arkansas native Ashley McBryde discovered her fan base in the UK. Taking to London’s main arena spotlight stage and pop up stages as part 4 sets across the weekend the crowd sung along to every word – even the songs she thought no-one in the crowd would know. Soon after those appearances she confirmed she would be returning later that year to support Luke Combs on his UK tour. With that tour she also performed her first London headline show, which saw tickets in such high demand that the venue had to be upgraded! Fast forward almost 12 months from that debut headline show at the Islington Assembly Hall and Ashley has returned for her first headline tour across the UK with a sold-out date at London’s O2 Shepherds Bush – this time with her band The Deadhorse behind her. In the 12 months that have passed, Ashley has been living up to the hype she left here by winning the ACM Award for New Female Vocalist and has been nominated for the New Artist of the Year at the upcoming CMA Awards.

As Ashley started her 3-date tour on Friday night, she stepped onto the stage with a now familiar expression on her face to the UK fans. A look of asking herself how did I get here? How did this music mad girl from Arkansas get to headline her own show in front of a 2,000-capacity sell-out crowd at one of London’s icon music venues – the same venue she was introduced to as a support act just one year earlier. Those first steps on stage may have seemed like a dream for Ashley, but it wasn’t. The smile and the reactions to the shouts from the crowd and singing along to every word didn’t leave her face for the next 19 songs.

Throughout the evening, she shared stories behind the songs and how she dropped everything when the phone call came in from Brooks and Dunn to appear on their Reboot album to perform You’re Gonna Miss Me When I’m Gone. As the night progressed, Ashley delved into her 2018 album, Girl Going Nowhere, as well as several fan favourites from 2016’s Jalopies and Expensive Guitars and the whole venue sung along to every word.

Following 16 non-stop songs, Ashley exited the stage to a huge roar and only a split second had passed before the crowd demanded more. Ashley obliged, returning for a three-song encore – closing with a powerful cover of Dirty Diana.

If you enjoyed seeing Ashley perform with just a guitar on her previous visits, having the support of The Deadhorse behind her bring a whole new element to the Ashley McBryde live experience. It adds to the energy and didn’t take away any of the atmosphere in the venue or the attention on Ashley’s powerful vocals.

Fans will be counting down till Ashley announces her next return and it’s safe to say she will once again move on to perform at bigger venues. With a Country2Country sized gap in her tour schedule next March (no dates between February 15th and March 20th), the return could be sooner rather than later and you would expect to see her quite a way up the schedule.

Setlist - 27th September 2019:
Livin' Next to Leroy
Lookin' for a Buzz
Radioland
You're Gonna Miss Me When I'm Gone (Brooks & Dunn cover)
The Jacket
Redemption
First thing I reach for is the last thing I need
Bible and a .44
Fat and Famous
Girl Goin' Nowhere
American Scandal
One Night Standards
El Dorado
Home Sweet Highway
A Little Dive Bar in Dahlonega
Tired of Being Happy