​The Sit Down with Bailey Zimmerman

The journey form the small town of Louisville, Illinois which has a population of just over a thousand people and working long hours on the gas pipeline to now having the fastest debut single to reach number one at country radio since 2015 is a truly exciting one for Bailey Zimmerman. The fact that he only began writing and making music in 2021 is remarkable, especially when you now consider that he now has over 850 million career streams.
​
His debut EP “Leave The Light On” (available HERE) which was released in October has made history as the biggest streaming country debut of all time and the most-streamed all-genre debut of the year. The EP release also saw each track receive over a million streams during street week making Zimmerman only the third country artist (after Luke Combs and Zach Bryan) to achieve that this year and as an artist he is the first ever to land three career-opening entries simultaneously in the Top 10 of Billboard's Hot Country Songs chart. 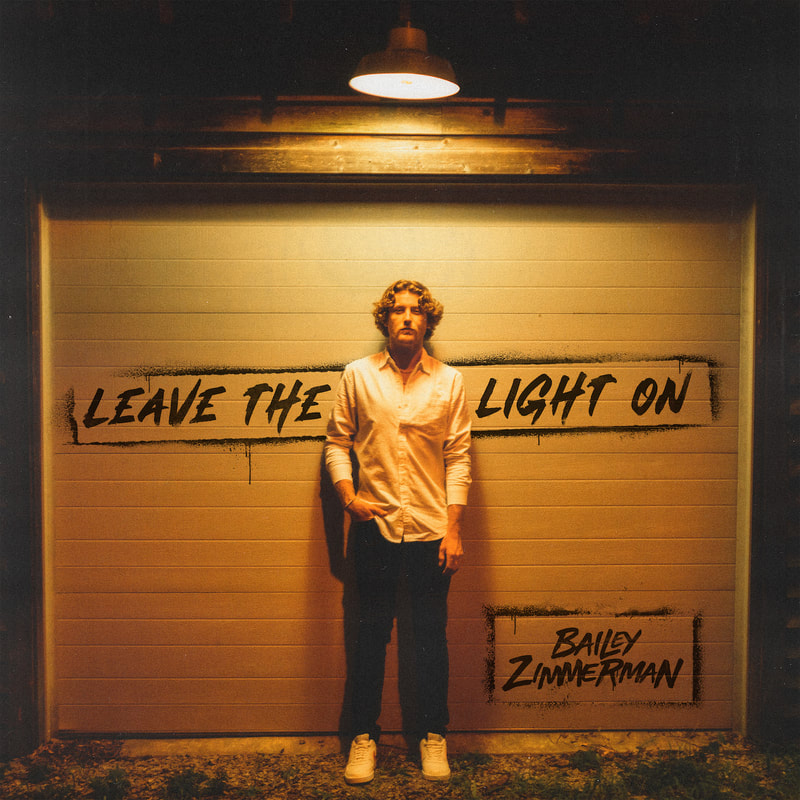 The list of acclaim and accolades will continue to grow as fast as his own rise as an artist, whilst he is now starting to turn his gaze to this side of the Atlantic and introduce himself to the European audience. We recently were able to meet Bailey over Zoom and hear about his start in the music industry along with how things are very different to working long hours in southern Illinois.
“Yeah, it’s super weird. It’s very different from what I was doing, being here is kind of like living a dream every day and a very different life that’s for sure. I was building electric trucks and one day I was listening to a Black Stone Cherry song called “Stay” and I just went into the other room and tried to sing it. I don’t know why I did, but I just thought I’m gonna try and sing this. I went and put my phone up then recorded a video with this cigar box guitar, that I found in this random room in my dad’s shop that day. I didn’t know how to play it, so I just plucked these three chords that sounded awful and sang the song. I put it on Snapchat and a dude named Gavin Lucas, who is someone I write with still to this day, lives near me and everything, then we just started writing. He had said I think we could vibe and you have a cool voice, then we started jamming and three weeks later we wrote my first song. The day after that I quit my job, I started being a country artist and trying to figure out what’s going on.”

The fact that it was Black Stone Cherry that ultimately were the catalyst for igniting the spark that led to his musical journey, points towards Bailey having more of a heavier and rockier musical upbringing.
“Yeah, I’m a massive Tesla fan, then Pop Evil, Hinder and anyone in that vein really, stuff like Nickelback and everything really. I was very big into rock before the age of ten, my first concert was a Tesla and Pop Evil concert with crazy things happening, so that’s where I get that rockiness and it’s from my mom as she introduced me to rock music way before country. Then Dad kind of put me onto country music because of radio and we’d just listen to 95.7 which is our local station where I would listen to country music, so I got the best of both worlds you know.”
​
The debut EP “Leave The Light On” came out in October this year whilst people were first introduced to him with “Never Comin’ Home” in February last year and whilst the accolades and recognition he has received for his releases so far have come over a relative short period of time, I asked Bailey about putting together his debut extended project.
“We just started writing a bunch of songs back in 2021 and just kept writing songs and writing songs until we got to OK what do we think this EP should sound like? We wanted that fall in love, rock in a hard place vibe but maybe throw in a couple of different track on there that are kind of rockier like “Trainwreck”. Over the last year to year and a half, we have been writing that EP. Basically since we started, I have been writing songs for it and then there are a lot of songs that will come on the album next year that we have written so far. For “Leave The Light On” the songs very much chose themselves.”
“I mean you can write a song and that it may not get cut for two or three years, that why I try not to listen to the demo too much because I want to listen to it when it’s out. What a lot of people really don’t get is that these songs, they take forever to come out and artists will get what some people call demoitis if you would, where you listen to it so many times that you forget how special the song is. Then when it comes out and people are saying that it is so great and they love the song, where in your head you have listened to it like a billion times, so you have got to not let yourself fall into that where you can still see that this song is really good even though I have listened to it so much but nobody else has ever heard this song and it’s very new to everybody.”
​
As an artist that has burst onto the scene and had a rapid rise in terms of accolades and numbers along with the way that he is an artist that people are genuinely excited about, there really has to be something that stands out. For Zimmerman, this is the scope of his appeal across the entire spectrum of country music which covers the southern rock influence that he had talked so heavily about, the real traditional country artist ideology and being appealing to modern day country radio. Musically he is real, he is great guy that is exactly who he is when you speak to him and from a listeners standpoint, he will easily have a home on EVERYONE’s playlist!
“Thanks. That’s what they have pounded into my head this past couple of years. Be universal, just try to get to where everybody can listen to it, everybody can feel and connect with the sound. That’s really cool to hear you say that because that is what I have worked so hard to do, to connect with all types of different people: old, young, tall, short or whatever, it’s to get them to listen to my music because I think that some of the things that I have been through in life and some of the things that I have had to get through are things that a lot of people have. I feel like man! We’ve got to make it to where they want to listen to it too so that they can feel something.”
Whilst he is the name on so many people’s lips in North America right now, Bailey and his team are already looking at building the same on our side of the Atlantic even further in the not-too-distant future.
“Well, I actually came over there just over a month ago and it was amazing I would live over there, I would. It just really chilled, everybody is really nice and it’s just a good vibe. I love the double decker busses and the ivy over the buildings because everything is so old where there is all this history. It was the first time that I had ever flew overseas and I was only there for like three days but I’m really hoping to come back soon and play shows, that’s what I really want to do there is play shows because it’s great over there. I had fish and chips, it was the first time I had it with scales and skin on the bottom which was sick and getting that was one of the first things that I did. I really wanted to do the Harry Potter thing and was bummed that I didn’t get to but there is always next time.”