I first discovered Tony Rice by purchasing an album at a bluegrass festival when I was a teenager.  I didn’t have a clue who he was and purchased the album because he was holding a vintage Martin guitar on the cover and there was a song called Plastic Banana on it.  Judging it by the cover, I thought I would probably like it.  I not only liked it, it changed my perspective on how I would play music from then on.  My way!!

In 2014 I was asked to contribute a song to be used on a tribute album for Tony.  I called John Cowan, Oteil Burbridge and Benji Shanks and the four of us went into the studio in Nashville and cut Me and My Guitar.  Nothing ever happened with project and the song was shelved.

February 2021, Brian Smith suggested that I now release that song as a single in tribute to Tony.  I thought it was a great idea.  Then the more I thought about it, the more I wanted to do something bigger.  I wanted to produce an album that expanded the boundaries just as Tony did as a musician.   The best way to do this was to do it with artists outside the bluegrass world who were influenced by Tony.  This would turn their fans on to Tony’s music and/or bluegrass in general.

So, we did it.  The record was recorded at the Nutthouse in Muscle Shoals Alabama and engineered by Jimmy Nutt.  The artists involved are from Americana, Country, Southern Rock, Blues, Roots Gospel and Heavy Metal. 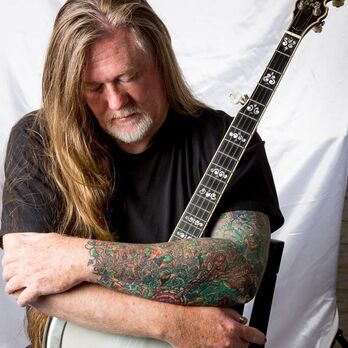 In the era of modern music, describing anybody as the “greatest of all time” is usually met with resistance—if for no other reason than the ever-evolving tastes of both musicians and fans—but if the topic is bluegrass guitar players, there’s a universally correct answer to “who’s the best”; the late, great Tony Rice. And today, a group of much lauded artists handpicked by bluegrass instrumentalist and producer Barry Waldrep, released a 21-song tribute to the master titled Barry Waldrep and Friends Celebrate Tony Rice on the 1 year anniversary of his passing.