​Bob Collum and The Welfare Mothers - "This Heart Will Self Destruct" 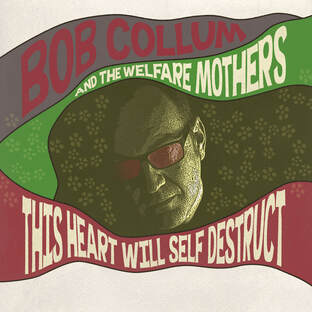 When you grow up in Essex, you are all too familiar with and proud of the county but trading Tulsa, Oklahoma for it may not be something you would expect to hear, yet that is Bob Collum’s story. As we look to be edging towards the light at the end of the tunnel and a return to more freedom in the world, Collum and his band The Welfare Mothers (although only one of them is actually a mother and none are currently on welfare) are about to share their new album “This Heart Will Self Destruct” on March 19th through Fretsore Records.

The project began life prior to the pandemic initially looking at creating an EP but through intermittent record sessions conducted safely, it grew to a ten-track full length follow up to “Pay Pack and Carry” which was released back in 2018. Across the nine original tracks and a reworking of the Leiber and Stroller hit “Saved” which was originally recorded in 1960 by LaVern Baker, Collum has a sound and created a collection that really epitomises what is Americana. On the record, Bob had shared:
“I think the album captures the last year quite well; songs about anxiety, hope, fear, humour, uncertainty, love, disappointment, redemption, faith, more uncertainty, more fear, more hope etc. I have treasured the chance to make music during these strange times and have even oddly embraced the process of creating in a new way. I can never thank the Welfare Mothers enough for their friendship and dedication. Martin Belmont and Peter Holsapple are collaborators that I could only dream of working with all those years ago. Hope you dig what we've done!”

The project not just encompasses all of these ideas but what makes the project stand out is the way that it allows all of the elements to intertwine to answer that strangely difficult question of what exactly is Americana? “This Heart Will Self Destruct” is a unique melting pot that combines Collum’s strong rockabilly influence from the likes of Bob Willis and Buddy Holly which is a strong initial theme you pick up on the record that is delivered so crisply then all the way through showcasing more country or singer-songwriter sounds so to more contemporary rockier or more traditionally power pop influences. However, the real skill is how cohesively the project fits together to combine them perfectly, which Collum and The Welfare Mothers have achieved to a T!

“The Welfare Mothers, with Paul Quarry on drums, Mags Layton on violin and vocals, and Martin Cutmore on bass brought these songs to life in a way that any singer-songwriter would give their eye teeth for. We were joined on these tracks by honorary Welfare Mother Martin Belmont on the flying Fender Stratocaster and Fender VI bass. Peter (Holsapple) added soulful Hammond B-3 and raucous harmony vocals to the track ‘Spare Me’ which was an intercontinental collaboration between Peter and myself. Pat Collier captured it all beautifully and his wit and patience was much appreciated as always.”
​
As a collection, there is something for everyone when you digest it track by track but bringing it all together is what completes this wild ride to have the opportunity to explore the complete and exciting scope of modern Americana. The new album from Bob Collum & The Welfare Mothers “This Heart Will Self Destruct” will be available worldwide on CD & Digital release via Fretsore Records on 19th March. To learn more and keep up to date with Bob, head over to his Website Twitter Instagram Facebook