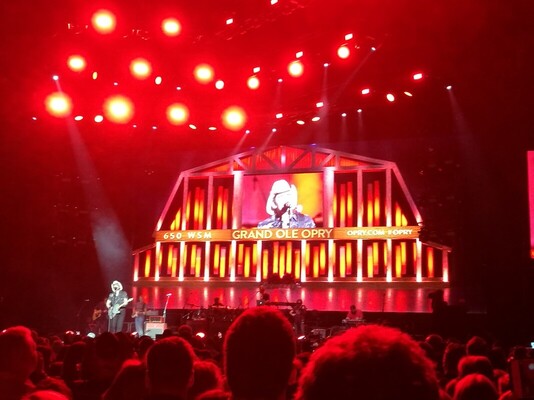 Brad Paisley arrived in the UK for one night only and was about to prove that London’s O2 Arena was not the home of country music for just one weekend a year. The cowboy boots and hats were out in force for what was to be a memorable evening from the former C2C headliner.
​
Starting the night, Chris Lane took to the stage for his first ever show in the UK. He didn’t look dazed by the night and would quickly learn that the majority of the crowd already knew who he was and knew plenty of his tracks. He shared stories behind his tracks, including the track he wrote with the purpose of proposing to his partner. For those who maybe were not so familiar with Chris, he made sure everyone was involved with a 90s country sing-a-long. Feeling at home, Lane even ensured he completed a lap of the arena to meet as many fans as possible!

Brad’s last UK shows came at C2C back in 2017 and with the fans having clearly missed him he wanted to make sure they would leave with memories that would last a lifetime. With his storytelling videos in full swing on the big screen behind him, early memories would be in place for two young fans who would be leaving with the souvenir of a lifetime - a signed, stage used guitar of Brad’s. There would even be an onstage proposal - she said yes!!

Coming out to Southern Comfort Zone, Paisley would run across the stage to greet the O2 crowd and demonstrate the showmanship that he possesses started early as the traditional guitar riffs came out. The evening was going to offer two hours of hits that Brad has recorded over the past twenty years and there were going to be a few surprises in store.

Chris Lane would return to the stage to perform I’m Still A Guy and gave them an opportunity to show the bond they had built during the tour as they would take a fans phone on stage to snap a selfie for Instagram. He would make his way to the back of the arena and perform on the pop up stage so everyone could get their closeup. Laughs were had when he debated the American to British terms in his songwriting - something which got us thinking of the country music songs that can’t relate to British life (dirt road anthem should be m25 anthem; red solo cup should be stolen pint glass from the pub; somethin bout a truck should be somethin bout a fiesta; and sunrise, sunburn, sunset should be grey sky, rain, darkness to name a few!!!).

If all that wasn’t enough, Brad hadn’t even got going for surprises. Praising the rise of the country music fan base, Brad also praised the emergence of talented UK artists and would welcome a star struck looking Ward Thomas on stage to perform Whiskey Lullaby. The sisters will need to be reminded that it was not a dream, they were on stage at The O2 with Brad Paisley! Which may also be the first time a UK country act has performed on the main stage?

As Today came to a close, Brad left the stage and no one could have predicted what was about to come. It only took for the first few chords of Mona Lisa to be played before those on the floor started debating if security would let them get away with doing the Mona Conga laps of the arena. With the conga in full swing, a special guest was getting ready to head on stage for the remainder of the encore - Keith Urban. Having already appeared on stage across London with Darius Rucker’s Hootie and the Blowfish, Keith would make his way across the capital for an unlikely double appearance. The roars from the crowd became demeaning as Brad introduced him and they spoke about his newly announced shows in May. As the three track encore came to a close, you had to look twice to believe who was on stage for the final track of the night - Brad Paisley; Keith Urban; Chris Lane; and Ward Thomas.