​The Sit Down with Brett Kissel

With his last European stop being at Buckle and Boots Festival in 2019, Canadian artist Brett Kissel makes a return visit across the pond this week as he headlines Italy’s Voghera Festival on the outskirts of Milan. As with many festivals around the world, Brett was originally scheduled to play in 2020, only for the festival to be cancelled due to the pandemic.
I was supposed to play in 2020, but finally get the chance in 2022. When you get a chance to play in Europe, and especially one of the most beautiful countries in the world - as far as I’m concerned having been to Italy many times. I love the chance to travel and get to bring my brand of country music and make new fans there. That is actually one of the key things that I’m going to be focussing on over the next few years and not necessarily be concerned about budgets and to double down more on the experience. That’s why I want to come back to Buckle and Boots, head to Wales and Scotland, play more of Europe and places I’ve never been before. I’m going to be saying yes, a lot quicker than I did.

With just the one European stop for Brett this time round, those who can’t make it Italy this weekend hopefully won’t have too much longer to see Brett in a city near them
I’d love to tour Europe but not in 2022. Everyone is ready to get back in the saddle but there has been a tsunami of concerts. Everyone only has so much money to go around, so people will spend it on the big names, and I’ll wait for things to die down a little bit until it’s the right time to play some really unique venues. I’ve got nothing but time, but I do want to do a European tour in 2023. I want to play Europe, be in a tour bus and play some great venues - that’s what life is about.
​
We welcomed two Canadian artists to these shores for the first time in Dan Davidson and Matt Lang, and we look set to continue to have a wave of talented Canadian country artists heading our way
Matt Lang and Dan Davidson are great guys and great entertainers. The more that fellow Canadians can go out and play across Europe then the more it will path the way for Canadian artists. We have a lot of country music to be proud of in Canada and I’m proud to fly the flag. We have some great music. The saying goes, A Riding Tide will Float all Ships.
Talking of unique venues, in July Brett will be heading to The Last Frontier to support Sam Hunt in Anchorage
It was April of 2015 I was last in Alaska; they love country music so much in the state of Alaska and country music just fits with their work ethics. Sam Hunt has never been to Alaska before, and I actually ran into him at a restaurant in Nashville and he was saying that he jumped at the opportunity to make some impactful memories. We know we are going to do that together.

With live shows now back in full swing, for many of Brett’s fans this will be the first time they have seen him play live since the release of his album What Is Life, which came out in April 2021 and also the album prior to that, Now or Never, was released just a few months prior to the lockdown in January 2020.
The record before, Now or Never, has She Drives Me Crazy and A Few Good Stories to Tell are also songs that I have barely played live. There’s a whole portion of my setlist that hasn’t been played live. Sometimes artists only get five songs in their career before moving on for whatever reason, and I have five songs that I’ve never played live!
​Making the setlist is a wonderful exercise. I sit down with my band leader, and we go back and forth about different ideas. We perform so much and know there will be people who have seen me before that will want something new and exciting, while those who have never seen me before will want to see the great things we’ve done in the past that will work. It is always a fun exercise and definitely one of my favourite things to do. 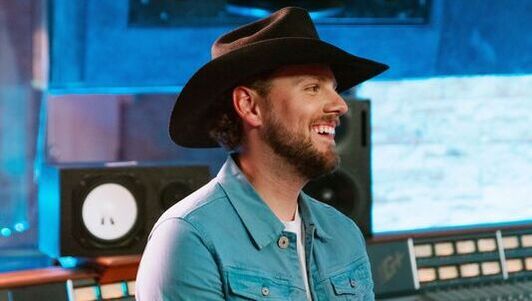 The last time we caught up with Brett was as just prior to his What Is Life album being released. One year on, the album, which featured his children, is still as special to Brett as it was the day it was released
What Is Life is the record that changed my life in so many ways. I completely restructured my life based on that music and project. The creative side of my brain and analytical side of my brain worked hand in hand to destroy the box of the realm of capability for me. I was a lot more vulnerable during this project but a lot more courageous too and could release the music that I wanted to release and find songs with true meat on the bone. It’s interesting how I started to care less about statistics and fame and fortune, and I started to care more about true meaning and deep impact.
​My eldest daughter did ask me why I did it, so I had to tell her it was a wonderful moment and time that I wanted to capture to save for the rest of my life. I know she will look back on it when she’s a teenager or as an adult and find it very special. She agreed, whereas my other two love it and love grabbing the actual physical album to show family and friends they are on one of my CDs. Then you have my nieces and nephews not knowing what a CD is!

At last months Juno Awards, Brett took home the coveted Country Album of the Year Award for the album, but it was an award at the Canadian Country Music Awards that holds a special place for Brett – winning the Fan Choice Award
Getting the Fan Choice Award, I think is the most special as it is voted on by the fan base across Canada. In our industry there are many different things and criteria for getting nominated and winning but the reality is the other awards have a bit of red tape, but this is as simple as it gets – fan base vs fan base. The fan base I have is so strong and loyal, for which I appreciate them so much, that when the nomination came out, I put my hands up and said if this is the year then this is the year.
Most recently, Brett has been keeping busy by hosting his own radio show on Apple Music – Canada’s Country Music. In the first ten episodes, he caught up with some of Canada’s biggest country stars, including UK favourites Lindsay Ell and Tenille Arts
When Apple Music reached out in the fall of 2021, they said we want to do something to shine a spotlight on Canadian Country Music. I think they saw how well their international programming was doing – including a show by The Shires. I was so grateful that Apple music approached me to be the host and it is a great compliment.

In some ways hosting isn’t different and in some ways, it is totally different. I’m now the one asking the questions and need to be a good listener, but the reality is I have so many great friends in the business and everyone I have spoken to on the episode I have a great connection with, so its able to be much more of a conversation. I have a lot of behind the scenes knowledge of their journey – including funny moments or moments they might not want me to say, but I can. I love having that information as that makes it for a better show
​
If parenting, getting back on the road and hosting a radio show wasn't enough to keep someone busy, Brett has also found time to release new music – most recently teaming up with 90’s boyband 98 degrees
Their legacy in Canada and the states is really special. They’re actually celebrating their 25th anniversary in the business this year. My manager, Jim Cressman, heard that 98 degrees were possibly going to do a country record, so he sent my song – Ain’t The Same – to them for consideration for their project. In the end their decided against the project but the guys reached back out saying they liked the song and wanted to know if I would do it with them. Of course, that’s the craziest question I’ve ever been asked as obviously, the answer was absolutely! The guys got in the studio and did their second verse and sent it back to me, which I bet took them about 30 minutes as they are one take wonders. I love what they did to elevate this song.
I’m very creative in the song writing process but I really enjoy getting behind a song to think about what it can become. With my co-writers, we felt there was a boyband feel to this track, but you never know what is going to materialise. The universe is always listening – so the next song I write I will put out there that George Straight will sing it and we will become friends and go golfing!
We had to know though – does this mean Brett will be taking choreography lessons for some boyband style dance moves!
They could tell me to get some dancing skills ready, but I would be retiring! I can two step and line dance to Cadillac Ranch, but if you want me to have some swagger, you have the wrong guy! I am the least cool guy you’ve ever met in your life. I’ll be the guy holding the guitar and let them go ahead.
In the video I had to differentiate myself by holding the guitar as these guys are so handsome and you get lost in their eyes. It’s a very unique music video and I am very grateful they all came down to LA and we were able to film something so special.

With new music out, we all want to know what to expect next from Brett
I’m working on the most extraordinary and extravagant project of my life right now. I am heading back into the studio, but the only thing I can say at this point is I’m truly allowing my heart and my internal compass be my guide, which again is a spinoff from the What Is Life record. It’s going to be like the last project but bigger, grander and with a lot more layer and directions that I’m going to go with musically. I’ve never been more clear to myself for the path and vision that I’m going with for the record that will come out this fall.
​
If you are in Voghera this weekend, we can guarantee you that Brett will be putting on a show for you to remember and the Italian fans will be wanting him to return to their shores as much as we do ours.