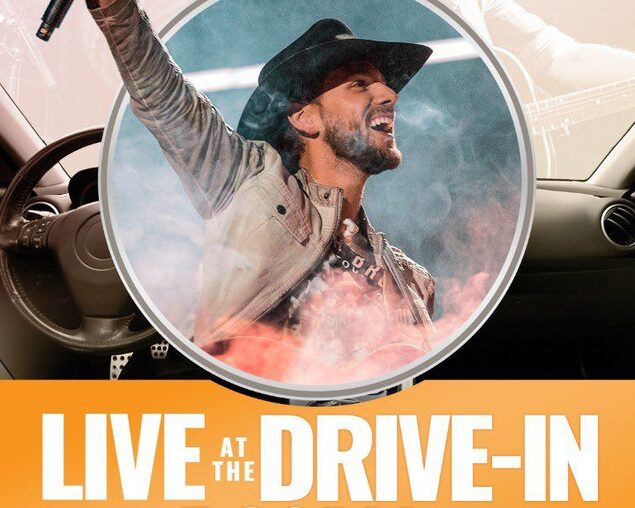 A few weeks ago, live music seemed like a distant memory and it would be many months till music fans could attend a gig in person. In Canada though, one artist came up with a way round the issue. Brett Kissel decided he would put on a drive-in concert in Edmonton. What start as one show quickly turned into 8. What started as one show in Edmonton has now expanded to shows in Regina and Saskatoon. Its not how we planned to catch up with Brett this week, as we should be with him at Italy's Voghera Country Music Festival, but as the road show rolls into its third stop we had to find out how it was going.

Congratulations on the incredible success of the Drive-In shows.
Thank you, and good to hear from you.

Where did the idea come from to do it?
2020 was going to be one of the busiest years of my career and when the pandemic hit, it took a while for it to sink in that the year was over for me, as far as my music career was concerned. So mentally I had already moved on to 2021 in hopes that we could simply delay all the plans we had to next year. Then one of my good friends texted me a photo of a drive in concert in Europe. That same night, I immediately hopped on a call with my entire team and said “We have to do a drive in concert.” It took 28 days to get government approvals, line up the show, put tickets on sale, and get the work done, but we did it. And pulled off a historic moment for Canada and for country music.

The shows are selling out in a matter of minutes, how satisfying has it been to be able to add more and more shows?
I’m not sure how else to describe it – incredible. When tickets went on sale for my shows in Edmonton, we were on the phone with Ticketmaster for updates and they told us the first show had sold out in minutes. So we said, well, “put up another show”. And that show sold out in minutes. So we kept going until we were out of shows. 4 per day - a total of 8 for the weekend. That was the maximum we were allowed to do, per our health regulations. Honestly, I felt like Shawn Mendes and Nickelback to have that sort of reaction.

Despite them playing behind screens, what's it like to be back on stage with the band?
We like to move around and interact, so this was a very different experience since they are all surrounded by plexi-glass. We had to adjust a little, but the thing I will remember the most from these shows is how big all of our smiles were. We just couldn’t stop smiling. We didn’t think we’d be on stage again for many many months so to have this opportunity again not just in Edmonton but then in Regina and now Saskatoon and hopefully more, we are just so fortunate and appreciative.

What’s it like to look out onto a sea of cars and hearing the horns beeping?
The horn honking was something I didn’t really predict was going to be as crazy as it turned out to be. I was trying to picture what I would be seeing when I looked into the crowd and I kept envisioning a sea of headlights. Honking didn’t come to mind, but I loved it.

How important has it been to be able to raise so much money through the shows?
Besides just getting on stage again, fundraising for local food banks was one of our biggest priorities, and that’s why we needed to make these shows happen. These are tough times for everyone but unfortunately, it’s especially tough for some people who’ve lost their jobs, their income, their livelihoods — so to be able to bring country music fans together and raise money for those in need was a really special feeling.

This weekend you were due to be playing in Italy, what message do you have for European fans?
I will miss seeing you more than you will miss seeing me. I cannot wait to return to Italy when it is safe to do so and we can party extra hard. I’ve been telling everyone, “absence makes the heart grow fonder”, and I know that’s true. We will make up for lost time. I promise.  I just hope that everyone stays safe and stays well!  Let’s plan a big celebration in 2021!!

​You can watch Brett's show from Regina in full below and we look forward to seeing him in Europe soon.