The Sit Down with Brooke Eden

The glorious ray of sunshine from West Palm Beach just outside of Miami, that is Brooke Eden first burst onto our radar with her 2014 independently released EP. The University of Florida graduate moved to Nashville and caught the attention of CMT amongst others, being named alongside Cam, Ruthie Collins and Clare Dunn in their 2015 Next Women of Country class. A maiden voyage across the pond in 2016 followed for C2C Festival before her “Welcome To The Weekend” release later that year.

Since then, things have appeared quiet in her camp over the last four years, yet rolling forward into 2021, Brooke is back and really ready to tell her story with a string of cohesive new singles that really emphasise light and positivity, with a completely natural and comfortable sound. Off the back of the second single in this trilogy of new music, Jamie spent some time with her (via Zoom) to hear all about it along with what the future holds and also how a Florida girl becomes a Tennessee Titans fan. One of the first things we picked up on was how through our initial chit-chat, other interviews and her socials was that despite a global pandemic she was someone that had found herself in a really good place:
“Yes, I am. It’s a lot easier to live life when you’re not living it in silence and when you don’t have to edit certain parts of you. It makes it a lot easier to live a happy life and just tell the truth, getting to tell the truth just feels so good!”

Was the “feel good” vibe the key aim of this project?
“After the year that we all just had, I felt it was really important to put out songs first which were really happy and had a lot of light. These three songs all have that light, all have that hope, all have that happiness and for me that was really important that before we put out any other songs, of course say this is who I am but also that anyone who is in a dark place or going through a struggle that there is always light at the end of the tunnel, everything always gets better so helping to spread that message was something really important to me in putting out this music.”
​
The three songs were produced by Jesse Frasure and from the evidence seen in the first and second release, appear very cohesive. Brooke talked about the journey of writing and recording these songs along with how that didn’t actually begin as the projects intention:
“We wrote “Sunroof” and “Got No Choice” which is the third song that is coming out, almost four years ago and “No Shade” we just wrote around five months ago. Writing them individually, no I did not know they were going to go together, I didn’t know that was a story until we wrote “No Shade” and once we had that song, it was like Wow! This is a story. We actually wrote “No Shade” about three days before we went into the recording studio and as soon as we wrote it, we were like we need to record this because this song really creates this trilogy and the story we want to tell but we didn’t know that whilst writing, it was just at the very end. As soon as we wrote “No Shade” I sent it to my whole team, we had already planned to make all of these songs cohesive production-wise but now it was cohesive story-wise and lyrically. That’s so satisfying as an artist and a songwriter to be able to do that so it was very much a no-brainer for us once we had “No Shade” written that this was to become a trilogy of songs that encapsulated a story.”
In addition to the songs and the cohesive nature of the stories, the other thing that brings this to life is through the videos which were directed by Ford Fairchild (who also took the pictures for the artwork and which we display) and also played a crucial role in depicting the story that she wanted to tell:
“Ford has been involved for a very long time, he actually did my very first photoshoot here in Nashville seven years ago and been a best friend of mine for the last two years. Over those two years, we’ve spent a lot of time around the backyard, around the bonfire, drinking some beers and just talking about what we want this music to look like. I wanted it to feel colourful and happy, especially after last year to bright some light. He really just got it, understood it and made it come to life in such a way, also being best friends helps the creative process because I don’t have to explain who I am to him. He already knows who I am and it made the process a lot easier because of that.”
​
The difficult question to an artist who has appeared to have taken some time out is why has this taken four years since her last release to be bringing new music out?
“I was going through a lot of change in my life and the record label was going through a lot of change as well so we kind of got to do this growing process together. They came to me about three years ago and said we don’t feel you have been able to put out music that has been exactly you as an artist. We want to support you putting out music that is you! That was the first time that anyone had ever said that to me so I didn’t want to just throw out the first thing that I wrote. I wanted to make sure I was creating this cohesive sound and story rather than just vomit out the first songs that we wrote. It was important to me that I spent time working on my sound. Jesse and I worked together for a long time but it was only a year ago that we officially decided to work together as artist and producer. Things just take a while and I don’t think it’s a bad thing because I had so much of my own process to go through in terms of self-love and self-acceptance that it was time that was necessary.”

Brooke made her debut across the pond FIVE YEARS AGO! After digesting the way that time has passed, we talked about her memories of that maiden voyage to these shores:
“Honestly I just loved the UK fans so much because y’all are really listening to the words. It was wild how I had songs that weren’t even physically out on iTunes or any streaming platform but fans over there had found it on YouTube and knew every single word to these songs that weren’t even released. It was such a cool experience to be in a room full of real music lovers that you could tell were really there for the music experience and I cannot wait to get back over there, I’m chomping at the bit to get over.” 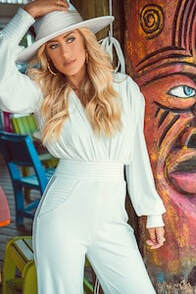 ​Given her positivity about paying in the UK, we talked about the importance of wanting to return and how the success female artists are having over here and particularly the traction gained by her labelmates Lindsay Ell and Lainey Wilson over here, why now is such an exciting time to try and venture further:
“It’s so important for me to get back over there especially as I love how y’all consume music and that makes it such a great experience for the artist because you feel like what you are putting out there is really being taken in the way that it’s supposed to. Lindsay and Lainey are both on my record label and we have such a great international presence now because of BMG. I’m super thankful for that and super thankful for the visibility we have over there.”

When we had talked about the positivity and happiness that she appears to be radiating, you see this in her socials with the way she appears comfortable and refreshed. One of the ways of being refreshed has come across is with her sharing cocktail ideas to correspond with the releases, so we talked about which is her favourite way to wind down with a beverage:
“I think my favourite cocktail that has been my happy little drink is the “No Shade” cocktail that I created. It’s gin which is my favourite liquor, grapefruit juice, lime juice, a little bit of honey and some bubbles. It’s just very refreshing, like taking a breath of fresh air!”

Keeping down the vibe of Instagram to end the piece (but was actually the first proper question I asked during our chat) I had noticed a number of posts where she had been sporting the navy and light blue of the Tennessee Titans, so given the historical achievements of the Miami Dolphins and the current world champions being in Tampa, I had to find out why a good Gator girl from the sunshine state would end up rooting for Nashville’s NFL franchise:
“I was never really a huge fan of football when I was in Florida. I loved SEC (Southeastern Conference) and college football, I went to University of Florida so was a huge Gators fan but as far as the NFL, I didn’t really get into pro football until I moved to Nashville. Actually Hilary, my girlfriend is a huge NFL fan so she is really the one who got me into NFL football and we started going to Titans games up here. I actually got to sing the national anthem at a Titans game, everyone was just so nice and I’m a huge fan of Derrick Henry who is number 22, which is my jersey so it’s just worked out that way. Hilary is originally from Carmel in Indiana, which is really close to Indianapolis and the Colts, so they are her number 1 but the Titans coming in strong just behind for her.”

The latest single “Sunroof” from Brooke Eden is out now which you can find HERE and there is plenty more new music on the way, including the culmination of this new music trilogy: “Got No Choice” which will be with us very soon.