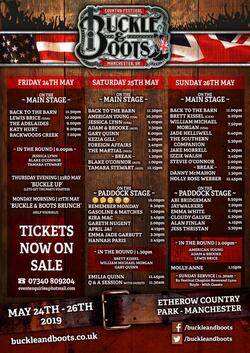 Following 3 hugely successful festivals to date and a continuous growth in popularity, Manchester’s country music festival, Buckle & Boots, presents another superb line-up for 2019, taking place May 24th-26th at Whitebottom Farm. Continuing their loyal commitment to supporting homegrown talent, as well as introducing rising stars from across the pond to a UK country fan base, this year once again sees an array of talent from all over the world, including Australia, Canada and the United States.

Buckle & Boots are proud to be bringing William Michael Morgan to the UK for the very first time. His debut single ‘I Met A Girl’ took him to stardom in 2015, hitting #2 on the US country airplay chart, and his subsequent album ‘Vinyl’ received wide-spread critical acclaim. Listed as a “Country Artist You Need to Know” by Rolling Stone, his infectious brand of traditionally-influenced country music will no doubt capture the hearts of UK listeners, where many have been clamouring for his overseas debut for quite some time.

South Carolina-born Lewis Brice is another artist making his first trip to the UK. Lewis first grabbed attention back in 2010 with ‘Ordinary Girl’, which resulted in his first appearance on the Mediabase and iTunes Country charts. He appeared in CMT’s first season of ‘Can You Duet’, finishing in the top 10, and he also appeared in the music video for ‘I Drive Your Truck’, 2014’s ACM Song of the Year. Lewis’ debut self-titled EP, which he produced himself, was released in July 2017 and received superb reviews, with Billboard listing him as one of their ‘Country Artists To Watch’. His live show is full of energy, with an infectious catalogue that brings a distinctive groove, narrative lyrics and bluesy soulful singing.

UK fan favourites American Young will be returning for their third appearance at Buckle & Boots with a stack of new music on the way (new single ‘Gonna Be You’ out now!) and will be headlining the Saturday night, following performances from New York artist Jessica Lynn, and Australian powerhouse duo Adam Eckersley & Brooke McClymont. Their Australian tour buddy Blake O’Connor will be performing on the Saturday afternoon, too, following his big win at Tamworth Country Music Festival as the 2019 Toyota Star Maker.

Buckle & Boots will once again be welcoming some of the best homegrown talent from the UK, too. British Country’s ‘Female Vocalist Of The Year’, Jade Helliwell, will be performing, along with multi-award winner Gary Quinn, and ‘People’s Choice’ award winners Kezia Gill and Izzie Walsh, fresh from their hugely successful trip to Australia. The Adelaides will be making their Buckle & Boots debut on the Friday night, and UK fan favourites The Southern Companion will be returning following the release of their critically-acclaimed album ‘Shine A Little Light’. Full line-up available on the Buckle & Boots social media pages and website.
​
Full weekend tickets available for just £80 for adults and £40 for 15 and under, with individual day tickets also available. All the details, including camping and glamping info, as well as festival guidelines, available at http://www.buckleandboots.co.uk