The C2C Sit Down with Caitlyn Smith

​Even if you are not completely familiar with Caitlyn Smith as an artist or come across her Starfire and Supernova records, it is an absolute guarantee you have listened to so many of her songs over and over again. As a songwriter, she is not far off royalty whether that be in Nashville on songs like: Tacoma (Garth Brooks), You Can’t Make Old Friends (Dolly Parton & Kenny Rogers), 747 (Lady A), The Heart of Dixie (Danielle Bradbery), Space (Lindsay Ell) and Wasting All These Tears (Cassadee Pope) or outside of country music where you may have heard her impact on songs from James Bay, Cheat Codes, Miley Cyrus, Meghan Trainor and John Legend.
That’s not a bad back way to start for someone that has only just this year been nominated for New Female Artist of the Year at this year’s ACM Awards. I was lucky enough to meet Caitlyn and see her live during her last trip to these shores back in 2016 when she played at The Troubadour in West London and now six years later, she is back in England to play at both Country to Country and the CMA Songwriters Series. Ahead of her playing at the O2, I caught up with Caitlyn to welcome her back to the UK and hear about her upcoming new album “High”.
​
Putting a piece together where you spoke to someone literally as an event is about to kick off and there is quite an intense period following it up that you come into this strange time paradox when you bring it together. I saw Caitlyn play at the CMA Songwriters Show on the Thursday night, the Big Entrance Stage on Friday, in a special showcase (with Tenille Townes and Alex Hall) on Saturday and again on Sunday morning. At one point during our chat, I had dropped in the old London bus joke about how you wait six years for something to turn up and then four turn up at once, but the excitement of returning was so evident even before that first show.
“I am so pumped. I had been wanting to do C2C for years! I love doing songwriters rounds because I also get to listen to my friends tell their stories so it’s less pressure and I love it. Opposed to a show I get the freedom to tell the story behind the songs. I’ll have to figure out what I’m playing because I have new music coming out, but It’s been a minute since I’ve been over here and haven’t played any of my stuff because last time I was here was before Starfire. I’ll play stuff from every record but I’m so excited to play the new record because I hope people will love it!”
Whilst the festival allowed her to play songs from Starfire and Supernova to a UK audience for the first time, it is unique position where fans want to hear these songs, but we are mightily close to the next chapter which is on the way in less than a month.
“I’m so excited about it! I have been spending the last year in the studio and decided for this record that I wanted to self-produce it. That’s been a very big adventure, it’s been challenging, terrifying and a lot of fun. The first chunk called “High” will come out on April 8th and then we will release “High & Low” as a whole album later this year, so even more is coming but I’m really proud of this record. Firstly, because I got to try my hand at producing and being in charge of the sonic landscape but also the songwriting feels more comfortable in a way. It feels a little more feminine and I don’t know, it’s a little more tender and vulnerable in some spaces so I am really proud of it.”

The title track of the record “High” may appear more familiar than other new tracks as it was written with Miley Cyrus and appeared on her 2020 Plastic Hearts album. There have been songs on each of Caitlyn’s records where her version of a song that she has written, appears after people may have heard it being sung by someone else. I asked what made certain songs in this fashion like High and Tacoma call to her more than others for her to record her own version for an album.
“I don’t ever have regret when other people cut something, because I think it’s such a high honour, but I think in a scenario like Tacoma or High, when I wrote those songs, I knew right away that this would go perfect in my set and what I want to sing every night. High is such a part of my story and I couldn’t imagine not singing it, so I just do my version because I have to.”
​
There is also a song on her Supernova album that had also been recorded by someone else but if you listen to the Cheat Codes version of “Put Me Back Together” it sounds very different to how you hear Caitlyn’s version. Through her entire back catalogue as a songwriter and a recording artist, this is one for me that I just think is so wonderful, so I just had to find out how this sweet little song (that also had an EDM interpretation) came together.
“It was just me and Jonny Price. We just wanted to write something beautiful that we loved, which is what we did. I didn’t know that when I wrote that song, I was going to cut it necessarily, but Cheat Codes hopped on it and brought in Kiiara to do their version. It was a song I couldn’t shake that I kept going back to. That’s like a super pop way to do it and I just heard it a different way which is kind of the same thing. It’s exciting whenever anyone cuts a song, and it was definitely different to what I heard in my head.”
The biggest change for Caitlyn since she last came to the UK is that she is now a mother to two boys who she had left at home with her husband on this trip so it did allow her to have some grownup fun (if you follow her on Instagram you may have seen her playing tourist with Tenille at the start of her trip) and also more opportunity to interact with the industry and fans in person.
“I’m just here on my own. They were out in Vegas with me, but they flew back to Minnesota, so I have got to have a little play time which is great, and we were all just a little slap happy. I’m going to miss those boys and I’m definitely thinking about them a lot, but it is nice to get away. Being here, it’s so nice to be doing things in person and I felt that at the ACM’s too with just being in the same room as the country community where you are able to see everyone’s face just feels so good because I’ve missed it.”
​ 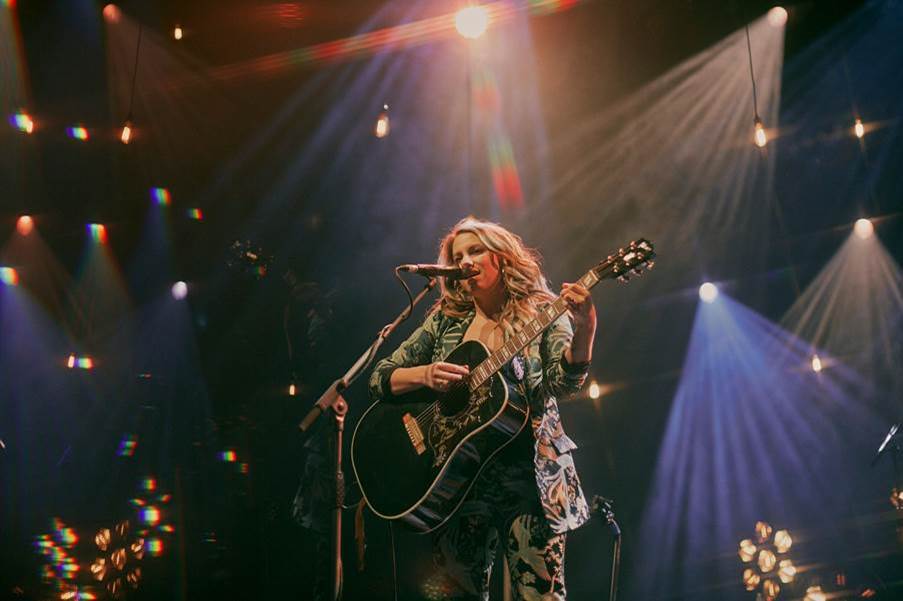 Credit: Ruby Gaunt
Lastly, I have long since known how wonderful she is as a songwriter. I have seen first-hand how warm she is as human being, how magical her voice is and just the way that she can raise the roof blowing people’s minds holding the word “make” performing Tacoma but for anyone new discovering her over the festival what was she hoping that they would find from their first experience of Caitlyn Smith?
“I hope that I can make people feel things! I’m excited to be able to be in person with this audience and I think what sets me apart from other performers is the guts and the grit, so I hope I can make a few people cry this weekend. A friend of mine says this quote which is great that as songwriters we hurt your feelings, so you don’t have to! I hope to hurt a few people’s feelings in a great way.”
​
Caitlyn Smith’s new album “High” will be released through Monument Records on April 8th and is available for pre-order HERE. You can find all of her upcoming tour dates on her WEBSITE and keep up to date with Caitlyn socially (which I would definitely recommend as she may have also mentioned that she is dreaming up plans to come back to the UK later this year) on INSTAGRAM TWITTER & FACEBOOK
​