​The Sit Down with Caitlyn Smith

Before her appearance at Country 2 Country earlier this year in March, we had waited five and a half years for Caitlyn Smith to return to the UK but luckily the roaring success of the festival and the reception that she received brought about a much swifter return to these shores for her second visit of 2022.
As one of the finest songwriters that you will encounter in the music industry as a whole that leaves such a distinct imprint on tracks that she has helped create, the Minnesota native has won praise the world over but her trip earlier this year as a performer set the tone for “High” which was released as the first part a much wider project.

During Country Music Week in October 2022, Jamie caught up with Caitlyn once more to hear about the second part of this project. Similar to her trip over in March we were spoilt by seeing Caitlyn on stage three times in three days, whilst we chatted on the Friday afternoon after her sold-out show at Islington O2 Academy2 the night before.
“It was so much fun. I will remember that night for the rest of my life. This has been my first UK headline tour and to have it met with a sold-out show in London with the crowd that was so magnificent, it was just the best. It’s been a similar response in the other cities too. We got to spend some time in Manchester, do a little shopping and sightseeing then played there before we took to train to Glasgow and flew back to London, so it’s been awesome.”
​
This was the second trip over from the States in 2022 for Caitlyn (with a lot of intention to make these visits nice and regular) where both times it had just been her playing acoustically on her own, but we talked about looking to bring a band over in future and maybe coming for a little longer with the whole family.
“Totally, that’s the dream. I’m saving up my airline points already so we can bring the kids but yes that the dream to be able to bring a whole band over. We just did a whole west coast tour in the US with a full band and it’s a different experience. When it’s just me and my guitar it’s obviously a lot more stripped down, vulnerable and more storytelling then with the band it’s more of a show experience.” 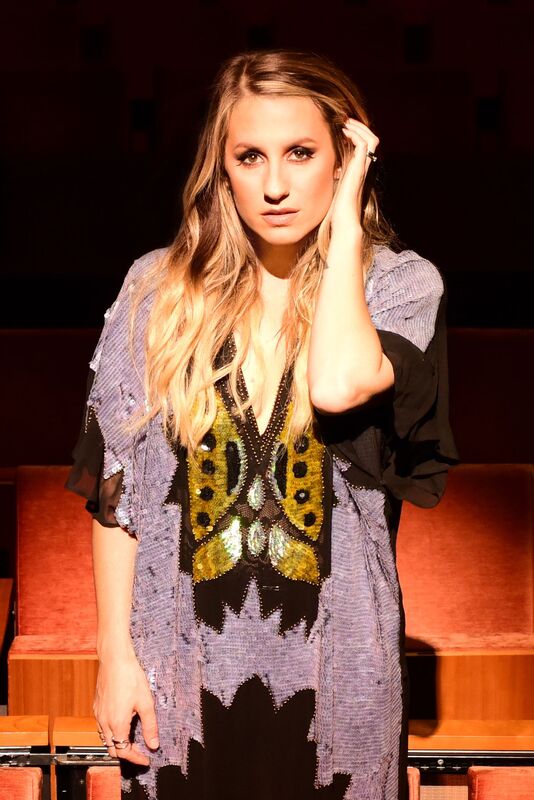 Within her sold-out headline show the previous evening, Caitlyn had played a pair of brand-new songs in the set in the form of bittersweet ballad “Lately” and the beautiful “Alaska” which along with “Mississippi” that she performed during the Country Music Week Hub writers round two days later would be songs which we will be able to hear on “High & Low”.
“Yes, they are and I’m so excited about it. I released “High” and originally before releasing the record it was going to be a whole album but just based on how people listen to music and attention spans, I wanted to split it up a little bit. The entire record is “High & Low” which I am really, really, really proud of this.”
​
“High” came out earlier this year with the complete “High & Low” project coming out into the world early in 2023 and we talked about the process of creating the record of whether it was written in one go where Caitlyn had the idea from the start to work on with the concept or it developed organically.
“The concept for “High & Low” kind of came part of the way through writing the record. “High” was one of the first songs that I had written for this project and then Miley (Cyrus) wanted to record it which was great, but I had always heard it a certain way, so I knew that I was going to release it on my own project. As I was writing, I also wrote a song called “Low” and then as the songs were coming together, I felt it was really a yin and a yang, so we placed the songs in such a way. Just like everything you have a good and a bad side or a pro and a con so, I think even having the space to focus on bringing the low in is an important piece.”
“That’s not just with my artistry but also personally because I think I mentioned it a little last night that I have been realising as a person that I put on this I have everything together face and show the highs. On my social media I like to show the high, I don’t like to show my messy and I think everybody has some part of that but realising and letting myself be ok with the low and be ok enough to show it, be real with it and be ok with the vulnerable parts, I have found a lot more freedom in not having to feel like I have to pretend. All of that to say, this is a big growth project for me musically and as a human.”

One of the other things about “High & Low” was that Caitlyn produced the record herself for the first time so had complete control of the outlook of a song’s finished article which we talked about whether she has since had a different thought process with working on songs and having much more consideration on a finished article as she is writing.
“For sure. Now that I’ve unlocked that door, I can’t escape it and so I will write a song where I’m thinking this is definitely some organ and I’ll hear we need steel guitar in this part so, I’ll hear elements in the writing room in my head and I can’t get away now.”

Where we were talking about the project as a whole being “High & Low” and that the High element came out in April, I asked whether she wanted people to listen to the two elements as separate perspectives or collectively as a sole idea.
“I’ve gone back and forth on what I’ve wanted but it will be a record in its entirety, just because there are some songs that hold both. I thought maybe I could do a “High” side of all high songs but there are some songs like “Nothing Against You” where there is this bittersweetness of like Wow, we’re fighting, there’s this trouble going on between us but also, I love you so desperately where it holds the yin and the yang. Definitely in my mind it will live as a complete.”

Caitlyn had talked about how “High & Low” reflected the range of human emotion and I asked her about if someone listens to the project and discovers her music for the first time, which song represents her best at her highest and which was a real window into her lowest?
“Wait so one from each? Ooh that’s tricky, I love that you ask questions that I’ve never thought of. I mean “High” seems like the best high song, even though there’s a little tinge of sadness in it, it is such a jubilant melody then “Alaska” is a true low for me. That’s my answer today ha ha.”
​
The most recent song that Caitlyn shared was the first introduction to the next part of “High & Low” that we were lucky enough to hear for the first time back in March at the O2 during a very special writers round with Tenille Townes and Alex Hall. I have always found Caitlyn’s craft as a songwriter so pure and distinct but every time I have heard “Maybe In Another Life” performed live I genuinely have found it to be like nothing else that I have ever heard.
“I’m extremely proud of this song. I feel like there are some songs that I go digging for and there are some songs that just find me which is what I think happened with “Maybe In Another Life”. What I love about it is that everybody has experienced, if you have had the opportunity to love and happen to lose a person, you know this feeling of sitting around with your third glass of wine and you can’t help but wonder what life could be if that had not have ended. It’s a very emotional song, the melody is what kind of hit me like a sack of bricks at ten o’clock at night when I was doing dishes and I just started with it but I’m so proud of that song.”
I had mentioned Tenille Townes, who is one of Caitlyn’s really close friends and has also been in the UK at the same time, but the pair have always managed to be playing in different cities each night.
“I know, we’re like ships passing in the night and we’re so sad about it. We were on FaceTime in the dressing room last night when we were both getting ready for our shows and showing each other our dressing rooms. It’s such a bummer that we’re not able to be in the same place and have the same shows but it’s fun that we’re both experiencing the same magic at the same time.”

We rounded off chatting about her trip over in March and also getting to be able to deliver her own stories as a performer AND a songwriter where she is able to see the reaction first hand to her stories for the first time.
“It’s the best thing in the world, for so long I was just writing songs and other people would cut them so I would never really get to see the true reaction. Now I’m really stepping into my artist muse and getting the opportunity to really experience these songs with people is really one of the greatest gifts of my life. Last night the line in London was long and people stayed for so long to be able to talk, I am grateful for every one of those people for sure.”

Caitlyn Smith’s “High” is out now through Monument Records and is available HERE.