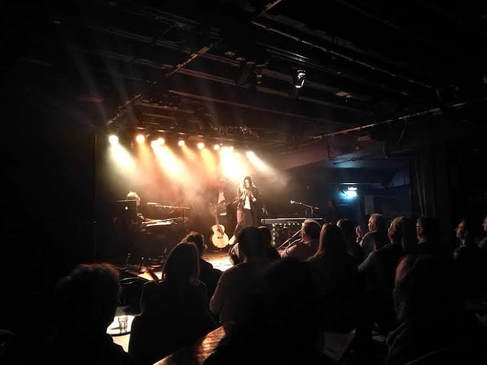 From the 24th of October until the 18th of November, artists are playing across London as part of the annual Roots Festival. With 13 events still to go, tonight it is the turn of Lincolnshire native, Callaghan at Camden Towns Dingwalls. The homegrown artist is no stranger to UK country music fans, having appeared twice at the annual Country 2 Country event and being added to various Radio 2 playlists - including a live session with Bob Harris.
​​
As Callaghan took the Dingwall stage, supported by a full band, she immediately showed just how much of a talented musician she is by playing the opening track sat behind a keyboard before moving onto the guitar for the second. As the evening progressed, the crowd hung on her every word, wether it be whilst she was singing or introducing tracks and sharing the stories behind them. With such an attentive crowd, Callaghan could share extreme detail behind each and every track she performed to the Dingwall audience. Introducing Crazy Beautiful Life, we were told about how she is now based out of LA, although she feels like it is more out of a suitcase due to the constant touring schedule she gives herself. After a cover of Stand By Me, it was time for one of the most heart warming stories behind a track we would here for When You Loved Me. The track was inspired by an 85 year old grandmother whose family Callaghan lived with when she first moved to Atlanta. She told Callaghan about her first love at the age of 17 and, although they never married and would move apart, could still picture exactly what he looked like all these years later. The stories continued and the crowd listened, only breaking silence to sing along and even attempt a crowd participation whistle for Better Together! Being back in London, where her family now lives, have Callaghan an opportunity to perform in front of her sister and parents. This tour has also allowed her the opportunity to spend time with her 7 year old nephew, Noah, the inspiration behind the track Noah's Song.

As the evening drew to a close, there was still time for more tracks, old and new, and the thought provoking story behind the track If You Miss Me, which is performed from the point of view of someone looking down on you from the afterlife. A rousing version of Signed Sealed Delivered lifted the noise level in the venue from the hush that seemed constant throughout. A not so final song, Broken, due to the size of the venue, meant Callaghan opted to stay on the stage ahead of the two track encore.

Before sending her band off stage for the night, Callaghan performed the uplifting Best Year, encouraging the audience to always chase their dreams as it will ensure they have a story to tell - something that Callaghan has clearly stuck by in recent years. To finish the night, it was just Callaghan and her piano as she chose to perform what she called a once in a century song - Somewhere Over The Rainbow.

Leaving the stage to a standing ovation, it is clear that although Callaghan may be based on America's west coast, she will always have a place in people's hearts in the UK and the audience are well aware she is one of our own. She had an unbelievable natural presence on the stage, which allowed for the story telling and the constant undivided attention from those in attendance.

With just a few dates left on this current tour, I'm sure Callaghan won't be home in LA for long and the UK fans will be praying she continues her crazy beautiful life on the road and finds herself on a plane back home very soon.