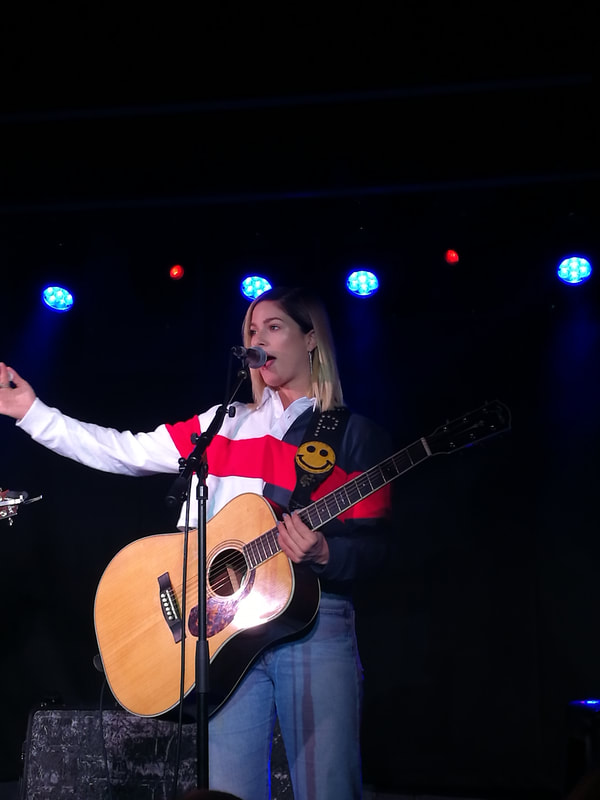 You could be excused for walking past the venue for Country Music Weeks Daytime Hubs, The Borderline, without thinking twice. An unassuming street just moments from Tottenham Court Road stage and in the shadows of some of the West Ends world renowned venues, the 300 capacity venue is no stranger to hosting country music concerts and many who frequent the smaller concerts would be familiar with the venue. With many fans powering through the weekend, after a week of non-stop concerts the main attraction at Sunday's day time hub was the former winner of The Voice USA - Cassadee Pope. It also saw a first for me, attending two concerts in the same day, in completely different parts of the capital.

With three acts performing prior to Cassadee's first appearance in the UK since her victory on The Voice - she had previously appeared at The O2 arena as a support act for Fall Out Boy with her previous band - the capacity crowd was ready for the main attraction to take to the stage shortly after 3:30 pm.

From the first lyric, Cassadee Pope had the few the sold out crowd that had gathered at the Borderlines attention - and she was never close to loosing it! This though seemed to shock Pope as on the conclusion of her first song, I Wish I Could Break Your Heart, she genuinely looked emotional as the crowd had sung along to every word and clearly had not expected the reception she was given. Her emotions for the moment and the crowds affection for her music showed no sign of changing has she played several crowd favourite songs including her recent release, Take You Home, a song I was not too familiar with (although a die hard fan had made a special request for), Eleven and even treated the crowd to a sneak peak of a new track, If My Heart Had A Heart, which as ever, despite not know the lyrics yet the crowd hung onto every word and there is no doubt that on Cassadee's return to the UK they crowd will be singing every word back to her. Enjoying every moment on stage, Cassadee opted to perform an exceptional cover of Martina McBride's track This Ones For The Girls.
​
The intimate setting allowed for Pope to soak up the atmosphere as she continued her set with her most recent release, One More Red Light. Even as her final song started- another track from her Frame By Frame album -Wasting All These Tears, which was her first release following her victory on The Voice, Pope still looked stunned by the reaction she had got from the London crowd. With so many coming to the lunch time concert session after nights with Kacey Musgrave's and Zac Brown Band, there was no sign of sore throats as every one in the crowd sung along word for word.

On the conclusion of the set, Pope took time to talk with Chris Country on stage about the experience and the plans for her album, which will be completed in the next few weeks and released next year. Based on this performance and the reception she received it will come as no surprise that it will more be a case of when Pope announces a UK tour for 2019 rather than if. You can also guarantee they are going to need to book some slightly larger venues than the Borderline, as there is no doubt she will be selling out venues up and down the United Kingdom.

Hopefully, we will now be seeing a lot more of Pope.