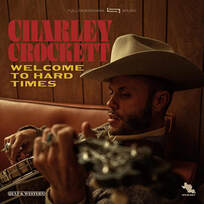 With already 3 first singles out with country psychedelic “Welcome To Hard Times” cinematic “Run Horses Run” and soul fusion “Don’t Cry," when it comes to hard times, Crockett is no stranger to such. Beginning of last year during a routine doctors appointment, the singer/songwriter was diagnosed with Wolff–Parkinson–White syndrome, a congenital heart condition and Aortic Valve disease where immediately was admitted to life-saving heart surgery. For such, the new 13 track album opens up about the sudden struggle in a metaphorical take fixation reality into fiction.
Produced by renowned Mark Neil at his home studio, the album plays with the theme of a lonesome cowboy, sees Crockett narrating the semi-autobiographical songs while painting pictures in his spaghetti western-like album. With the ballroom like “Tennessee Special” to the hurt “Fool Somebody Else” and ever ending kaleidoscope of life in “Wreck Me.” All in a while, “Lilly My Dear” sound is an ode to old-time string music, While dealing with gambling blues “Heads You Win” “Raining in My Heart” brings an ultimate throwback to the late 1960s Memphis rock, “Paint it Blue” continues the western theme with a tale of outlaw out on a run while grieving the past. If you continued to listen to the album in its order you’ll somewhat see a story correlation where the out on the run outlaw is no longer free in “Black Jack County Jail.” Meanwhile, regretful “The Man That Time Time Forgot” the story doesn’t end still, instead it ends with the lonesome outlaw under “The Poplar Tree” speaking of his life and woman who set him astray.

Welcome to Hard Times celebrities roots music as a whole with Crockett fusion of western swing to late Memphis blues/rock in the meantime, old-timey string music (way before what we now know as bluegrass.” while combining the element of storytelling.