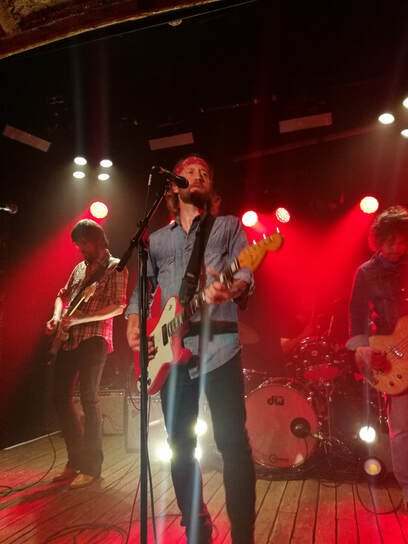 On Chris Shiflett's last performances in the UK he was part of a three date tour playing to over 200,000 people. This time though, it is slightly different. In the shadows of London's Shard, under 400 fans snapped up tickets in a matter of minutes for this intimate show in the build up to the release of his second solo album, Hard Lessons. When you see an artist touring for their side project you always ask yourself one question - are they fans of the solo artist or the lead guitarist of a band? Despite the expected tour t-shirts many were familiar with Chris' previous solo work - West Coast Town - and the two tracks he has already released from his second album.

From the start of the evening one thing was clear - Chris and his band were going to bring the noise to Omeara and leave fans with an intimate gig to remember. Opening the set with tracks from his first album, Chris played track after track barely taking time to pause for breath. The night was an opportunity for fans to hear yet unreleased tracks including Thought You'd Never Leave and Fools Gold early on. A highlight of the evening was the introduction of his most recent release, under two weeks ago, Welcome To Your First Heartache. I'm sure it allowed many to reminisce their own experience, although for Chris it was written with his 15 year-old son in mind after he got his first girlfriend.

As the evening continued Chris made sure the crowd kept him up to date on the progress of his beloved Arsenal who were playing at home just a few miles north. He continued to offer both new and old tracks before leaving the stage to Hardest Lesson. It's hard to say if the crowd was just trying to take in what they had witnessed during the evening and the pure talent that had been on stage as there was minimal request for an encore. On returning to the stage Chris even made a comment that the crowd had better not ask for more when they do finish as they don't have any more tracks! A three track encore followed with Shiflett closing out with the title track from his debut album West Coast Town, which certainly left you leaving the building with a smile on your face.

Looking back on the evening now, my ears have just about stopped ringing. Shiflett clearly used his big stage experience to ensure every fan enjoyed their night. With just two covers, Rolling Stones (Star Star) and Buck Owens(Together Again), it was an amazing opportunity to see what Chris can offer as a solo artist and the answer is a lot! Hard Lesson's will be out 21st June and we are excited to hear the remaining tracks few tracks that were not played last night on release.

This short run of date in the UK finishes this weekend with stops still to go in Bristol and Manchester before stops in both Edinburgh and Glasgow on Friday and Saturday night.