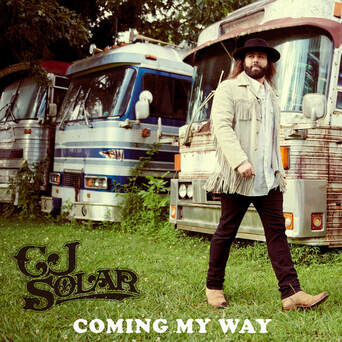 CJ Solar has released his latest EP (Friday 1st May), Coming My Way, and we have been able to have a quick chat with CJ about it and the importance of staying connected at a time when much of the world is working from home. This latest release from the Baton Rouge native features his first top 10  hit, Coming My Way. Many may recognise his name from his songwriting, which has included a co-write on Morgan Wallens track Up Down, as well as releases for Jason Aldean and Justin Moore amongst others. This latest release is just the next step for CJ to come into the spotlight.

1. How important has it been to stay connected with fans on social media during this time?
- So important! Been doing FB and Instagram lives a couple nights a week and its really helped me stay busy and in touch with the people who support my music!

2. You co-wrote all six tracks on the EP, how was the writing process?
- The writing process is pretty similar for everything I write… getting in the room with friends and seeing what falls out! The ones that fit me the most end up on my records!

3. The EP features your first top ten hit, “Coming My Way”. How did it feel to see the track doing so well?
- It felt great! Seeing radio stations around the country get excited about the track was an awesome feeling! Playing it at shows and seeing people sing along was great!

4. Having performed a few Quarantine sessions, what has the reaction been to the new tracks?
- The reaction to the new tracks has been awesome! I’ve also been trying out some even newer songs that could be on the next record and its been cool getting feedback on those too! First time I’ve done anything like that so could change the way I pick songs going forward!

5. Having written tracks for many artists, is there one track you wish you had kept for yourself?
- I never regret giving songs away to other artists because I can do my own version later! As cool as it is singing them myself its just as cool seeing them reach a huge audience when a big artist records them!