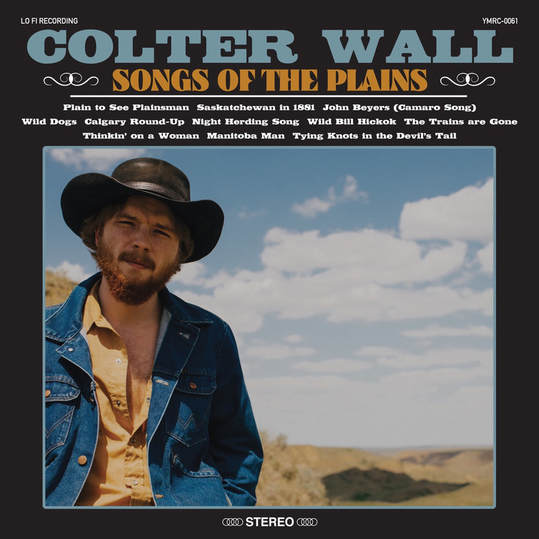 Canadian singer-songwriter Colter Wall is set to release his highly anticipated second album ‘Songs of the Plains’ this Friday (12/10), a year after his self-titled debut Colter Wall came out in 2017.

Opening up with ‘Plain to See Plainsmen’ it mirrors the faces of Country music early troubadours echoing the sound of the past of Dick Curless and Ramblin Jack Elliot. Baring his tales of the south, ‘Saskatchewan in 1881’ tells the history of THE TEMPERANCE COLONY, a movement that solemnly believed alcohol was the source of destruction in their land. While Mickey Raphael harp blows and Wall finger picks, Lloyd Green makes his grand entrance in ‘John Beyers (Camaro Song)’ taking his ostentatious sounds to ‘Wild Dogs’ Wall pays a special homage to country music forgotten hero Billy Don Burns as so he continues with Wilf Carter ‘Calgary Round-Up’ unearthing Canada’s western legend.

Taking a rather slow approach than original and turn on yodeling to commemorate Carter’s legacy. The story led album introduces charters of the wild west of Canada to the listeners in a campfire manner. As Wall begins to sing you’re involved, you’re part of the story and in search to know what takes place next ‘Wild Bill Hickok’ followed by ‘The Trains Are Gone’ and ‘Thinking on A Women’ showcases the rising musician smooth yet full-toned voice.

Sharing his thoughts of the album “One thing I’ve noticed over the last few years, in the United States and playing in Europe, is that people all over the world really don’t know much about Canada at all…When you talk about Saskatchewan, people really have no idea. Part of it is because there are so few people there. It’s an empty place—it makes sense that people don’t know much about it. But that’s my home, so naturally, I’m passionate about it. With this record, I really wanted people to look at our Western heritage and our culture.” covering cowboy classics in illuminating ‘‘Night Herding Song’ and a characteristic take on ‘Tying Knots in The Devils Tail’
​
With praise from the likes of The Rolling Stones, The Times and musicians such as Steve Earle Colter Wall is a one to look out for as the 21-century country balladeer.