Outlaw country mainstay Dallas Moore has released the first single and title track from his upcoming LP The Rain at The Boot. The single is now available on all streaming platforms with the full album slated for an April 9 release date.

2020 started like any other year for Dallas Moore. On the heels of his 2019 LP Tryin’ To Be A Blessing, Moore and his band were booked to perform over 300 shows for the tenth year in a row, prepped and ready to continue tearing up asphalt between dive bars and honky tonks across the country. However, as the global pandemic brought the live music industry to a screeching halt, Moore suddenly found himself with something he wasn’t familiar with after all those years of constant touring: downtime.

“I do most of my writing when I'm riding my Harley Davidson Road King or cutting grass,” Moore notes. “Our tour schedule had been so heavy for the last several years that I hadn't been doing very much of either. All of a sudden I found plenty of time to ride my bike and write.” The songs came quickly, capturing a sense of renewed energy that Moore found in his downtime. “I hadn't written a song in nearly two years,” he recalls, pointing to the silver linings of being pulled off the road. “All of a sudden, eleven songs poured out in a three-week span. That makes The Rain different from anything I've ever done after all these years of constant touring.” 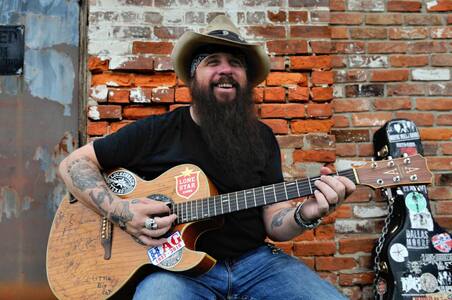 Make no mistake, though — The Rain is not a pandemic/quarantine-concept record — it still bears the timeless honky-tonk swagger for which Moore has become acclaimed over the years. From the flint-and-tinder autobiographical swagger of “Every Night I Burn Another Honky Tonk Down” to the timely awareness of “Better Days” and the album’s anthemic title track, this is Dallas Moore at the height of his craft -- a bona fide troubadour continuing down the path, even if the path might look a little different after 2020.

Moore and his band returned to Nashville’s OmniSound Studios — quickly becoming the band’s home court — to track the album, once again tapping the renowned Dean Miller as producer. Moore’s self-proclaimed “Honky Tonk Dream Team Band” consisted of Chuck “Lucky Chucky” Morpurgo (Moore’s guitarist of 25 years), Tim Galloway and Guthrie Trapp on guitar duties, Jenee Fleenor (CMA Instrumentalist of the Year) on fiddle, Chad Cromwell on drums, Steve Hinson on pedal steel and dobro, Gordon Mote on piano and organ, Lex Price on bass, Sweepy Walker on harmonica and Perry Coleman on backing vocals. “These sessions were the most relaxed and enjoyable of my career,” says Moore. “We had a lot of laughs and grins as the songs took shape and came to life organically and we got most of them in one or two takes, which gave everything a live feel — which I’ve always wanted to capture in the studio. I think this album is my most focused and realized yet and another step in my journey as I kick the can a little farther down the road.”
This live-in-a-room, lightning-in-a-bottle energy permeates The Rain from top to bottom. Tracked in just two days, it’s a snapshot of an ace songwriter and performer rolling with the punches in a year which had plenty to throw. It’s a more than worthy entry in the canon of Dallas Moore, who enters an uncertain 2021 ready to hit the road again, even if it looks a little different this time around.