​The Sit Down with Drake White

Since his first visit to these shores back in 2017 (where he appeared as on the Yamaha stage in London during C2C in addition to being part of the CMA Songwriters Series alongside Maren Morris, Kristian Bush, Liz Rose and Mac McAnally) Drake White quickly became an instant favourite of the UK audience performing songs of his debut album “Spark”.
​
Fast forward five and a half years, where we have the full-length sophomore release “The Optimystic” (available HERE) and White is set to return this summer for his fifth visit across the pond which will include performances at two of the UK’s largest outdoor country music festivals, which we recently caught up with him over Zoom to amongst other things, hear about the anticipation for his return and the background behind his new record.
The upcoming trip in August which will include shows in London, Manchester and Bristol in addition to performing at The Long Road and Millport Country Music Festivals will be his fifth time over here in the UK since he first appeared at C2C in 2017.
“Yeah, it’s something like that. Personally, I’ve always had the desire to travel the world and be a world traveller. I’m kind of a nomadic spirit so I have always realised the value in going to other places that other people may not be willing to go. Whether it be hunting, fishing or just going against the stream, ever since I was a kid, I’ve had that spirit in me. Going to Europe and the UK, being over there is doing something that I’ve always wanted to do, and we’ve laid a lot of groundwork over there in the 2015 to 2018 area and I’m looking to capitalise on that. You do that and call it an investment, it takes a lot of money to get over there and a lot of money to invest and win the fans, but we did that so, we just want to keep getting over there and servicing those fans.”
​ 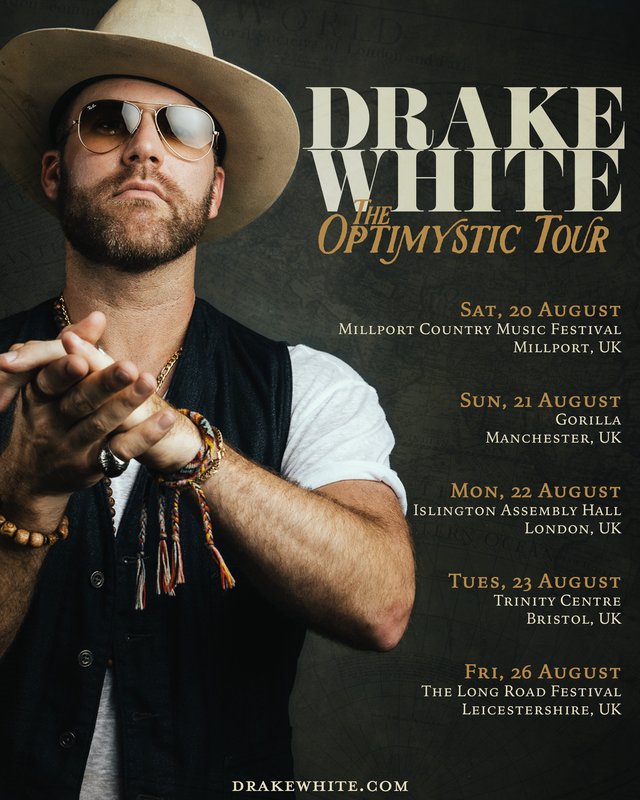 Whilst the last couple of years have been rather surreal for everyone and has presented many challenges, Drake has really been through a lot since his last appearance here in 2019, so to see his commitment and desire to return which will come to fruition next month is something that we are all very much looking forward to.
“I had a homoerotic stroke on stage back in 2019 due to an outlying condition that I had called AVM and that paralysed my left side, so I had to get back on my feet, teach myself how to walk again and the fans just picked me up. Whether that be the UK fans, here in the States or all over the world, people said to me that you have a purpose and your music helped me with this or helped me get through this tough time in my life, so you’ve got to keep going. It was that kind of stuff that kept me going and getting back on stage. To get over there to the UK and build something, the goal is obviously to be able to go over there and appeal to the masses, play bigger shows and bring this new spirit of optimism. The important message of this is that I went through a stroke, we all went through a pandemic and all this stuff, but I still have the desire to come over there and play music because it’s my purpose.”
​
I asked Drake about his previous four visits to the UK and what keeps bringing him back along with whether he has had the opportunity to explore substantially in addition to playing his shows.
“I’m a nomadic soul, I make a very big point to walk around the cities, I graduated in engineering so the structures and things like that are very appealing to me. Studying that kind of stuff and going to look at the different architecture and the different art helps me become more of a rounded writer. It gave me a calming sense when I met people over there in a pub or whatever, just having a beer and realising that we’re all the same, everybody is the same, it doesn’t matter how many miles separate you. I try to come over a day or two early and rent a car, I take that risk driving on the other side of the road and head out in the name of exploration. I am my own Lewis and Clark, or my own Hemingway and those guys did things because they had a spirit to see things.” 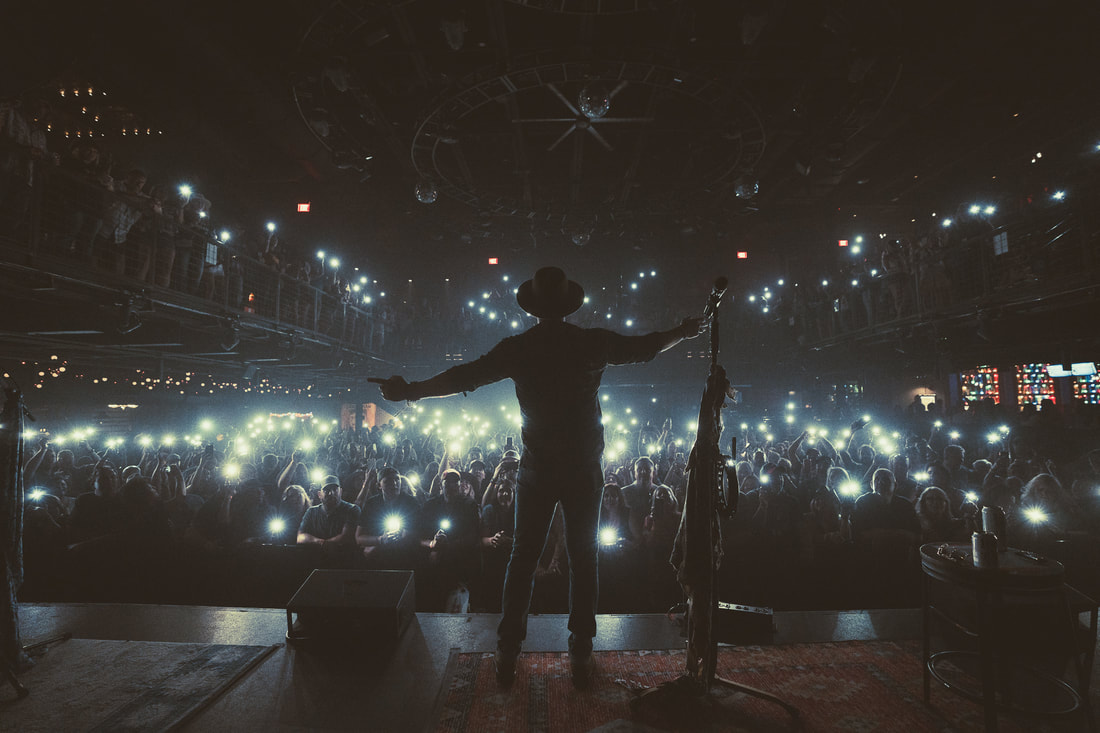 Drake has recently released his new album “The Optimystic” which he co-produced with Jaren Johnston and arrived around twelve months since his last EP “Stars”. We talked through when the creative process for the new record began as to whether the tracks were all written post the last EP and when Jaren got involved or how many of them had been in the locker that Darke had been waiting to bring into the world.
“It did come to life a little bit more when I got with Jaren but my discography through my career has been the scenic route, we haven’t had this huge hit that has exploded us into the stratosphere. It’s been a lot of writing and I love to write, I’ve written so many songs that I want to get out there. Chris Stapleton who I think I can consider a friend, watching his trajectory and the way that he came through as a writer, he wrote hundreds and hundreds of songs. Those first records, some of those songs were ten to twelve years old, this sums up “50 Years Too Late”, “American Thunder” and “It Takes Time” where those are ten years old. It’s just getting out of the grip of putting pressure on it and just releasing it then letting people decide what they want to decide.”
​
With regard to Jaren as a producer, we talked about how the pair came together and what made Drake decide that The Cadillac Three frontman was the right fit to work with on this project?
“He’s just lucky that I called him! No, we’ve known each other for twelve years and we’ve always been in the same circles. I love JJ and we had always wanted to work together, honestly the higher ups thought we would go too far left being too rock or too country and getting out of that radio world, so it never happened. Once I became independent, I just called him up, said let’s make this record and he was all in.”
Both Drake and The Cadillac Three will be significant parts of The Long Road Festival this year, whilst Drake will also headline the Millport Festival in Scotland. Both of these festivals really showcase the UK audience and why people are captivated with coming over to play here, especially as part of two of the country largest events in the genre.
“Every show is a big deal to me. I was in a position where I couldn’t walk and getting back to that stage is a holy place. I think of it like that when I walk up the stairs to get on a stage, I thank God for that stage so, to be able to come and travel over there to share my music, share my new perspective and share these songs is all that I have ever wanted to do so I’m fired up. We’re gonna raise tents, rock & roll and it’s a different thing with a lot of energy where you can feel the spirituality so I can’t wait!”

Down in the great state of Alabama, college football in the American sense is even bigger and more influential than our own version of football is on this side of the Atlantic. The two largest universities; Alabama and Auburn both compete in the SEC West, where the Alabama Crimson Tide programme is regarded as amongst the most prolific in the country, but Drake studied for his degree at Auburn, so we rounded off talking about how nice it is to chat to someone from the state that leans more towards War Eagle than Roll Tide.
“It’s a very long story, I graduated from Auburn, I love Auburn, and I have more in common with that part of the map as opposed to Tuscaloosa, but I love the excellence of Alabama football, the excellence of Nick Saban and I respect that but my hearts with the Tigers.”
​
Drake White’s latest album “The Optimystic” is out now and available HERE. UK fans can catch Drake when he returns in August for shows in London, Manchester and Bristol along with his appearances at Millport Country Music Festival in Scotland and The Long Road Festival in Leicestershire. You can find full details and ticket information on his WEBSITE whilst you can keep up to date with Drake socially on INSTAGRAM TWITTER & FACEBOOK.