​The Sit Down with Elvie Shane

Elvie Shane has had quite the introduction with his debut single “My Boy” hitting the number one spot on country radio and the acclaim of his first album “Backslider”. Having been on the road with the likes of Brooks & Dunn and Miranda Lambert, Shane looks set to build on the success of his debut record as he heads out for the summer for a string of festival dates and opening for Darius Rucker. His second single “County Roads” is with country radio now and ahead of what promises to be a busy summer, we hung out with Elvie over Zoom to get to know more about the Wheelhouse Records artist.
“Man, things are going great. I just came off the road with The Cadillac Three this weekend. I had a blast, wrote some songs and might have a little surprise coming down the line for everybody. I just excited to be at the preface of touring this summer and doing festivals for the first time, like really hitting it hard for the first time and getting this record out there in front of more people’s ears and eyes.”
​
Elvie’s debut record “Backslider” came out at the back end of the pandemic, so this summer is obviously a big point in being able to get out and play these songs live for the first time.
“We just came off a club headlining tour where we were playing venues around fifteen hundred capacity and starting to build a crowd where the numbers really surprised me, but people were showing up. Doing club shows is cool because people show up for you. I got to watch my band grow and I’m probably the only guy you’ll meet right now at the level and my career in music in Nashville that is travelling with a seven-piece band. People tell me that I’m crazy for that but then they come to the show and they change their tune afterwards. My guys, the Broken Arrows Band put a lot of work into it, they bust their tails, they work hard and they’re great players. We’re having a wonderful time on the road and I think more than anything, the biggest pay off for me is seeing my band grow and seeing the crowd grow.” 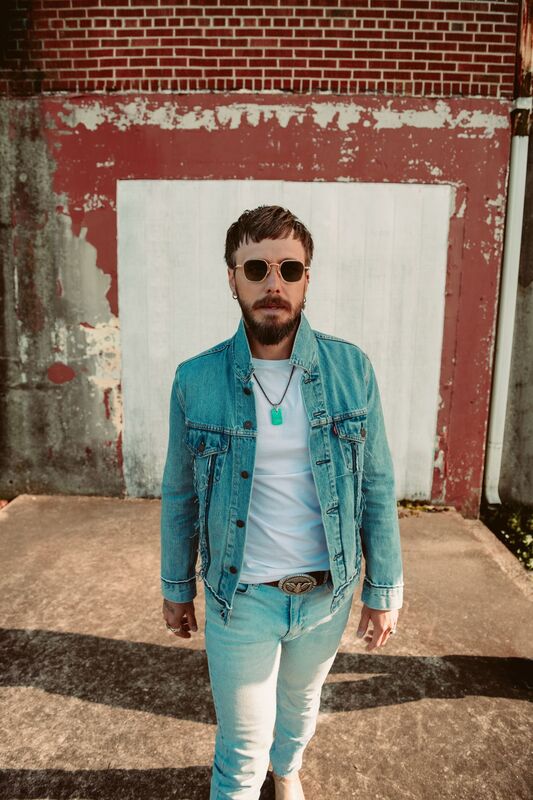 He had earlier mentioned that he had been playing some shows with The Cadillac Three and is jumping on the road with Darius Rucker over the next couple of months too. These are both serial visitors to the UK, so we talked how keen Elvie was to follow in their footsteps and head over to this side of the Atlantic.
“Oh yeah man, I’ve been paying attention to life over there for a few years now. I just love and appreciate how people over there respond to music, respond to authenticity and how they dig into records. It’s not just listening to a single and thinking that’s the only song that this person has, people really dig in, listen and try to learn more about the artist. It’s cool to watch people you respond to be similar to people that I respond to musically. Everyone has got a place over there and I’m excited to come over there to try to plant roots a little bit and see if I can win them over.”
​
His first radio single “My Boy” deservedly hit the top spot as a number one song to get the ball rolling. After we had talked through the randomness of life over here and the real life Game Of Thrones geographical imprint of our country, we went on to talk about the success of the single and whether the way that a song takes so long to ascend to the pinnacle was such a surprise when first putting music out into the world.
“What surprised me was just how much work goes into it and what you really want out of that is that you want people to be aware of what you are doing and what you are putting out into the world. A number one is a great catalyst for that! With “My Boy” I never let myself think that it wouldn’t go number one, I’m big into the fact that your life will go in the direction of your thoughts. The man that you look at in the mirror fifteen years from now is going to be a product of your thoughts today. I always visualised that song going number one and when you go through it you realise how many people become part of making something like that happen.”
The ultimate payoff ended up being seeing all those people that had a hand in getting that song to where it was at and also realising that what you want from your songs is for them to end up not being your songs anymore, you want them to be everyone else’s songs. It was a really cool learning experience but also terrifying, even depressing in a way afterwards as we’ve got it and this feels awesome but that’s go to fade at some point in time and it’s like what do we do now? I’ve got this whole other record to focus on and meanwhile I’m trying to figure out what I’m doing next and putting that narrative together but I’m super blessed to ring the bell with “My Boy”. I’m a country rocker, I grew up listening to Steve Earle, John Fogerty and Dwight Yoakham, those were my biggest countryesque influences. “My Boy” was a very heart-warming mid-tempo ballad but it’s still very much a part of who I am, where I come from and my core values and beliefs so to be able to ring the bell with that song means the world.”

One of the other tracks that stands out on the record is “Nothing Lasts Forever” which features Tenille Townes. She wasn’t a writer on this track, so I asked how they got Tenille in on the duet and what it was about her that Elvie felt was a perfect fit for the track.
“I just see a lot of talent and I heard a voice that I’d never heard before. I gurned out a little bit and reached out to people trying to get her phone number then I got her phone number and I sent her a text. I sent her a message saying I’m Elvie Shane, you don’t know me from Adam, but I love what you do, and would you be so kind to sing on this song with me? Then she obliged and we literally met in the studio on the day that she showed up to sing and we’ve become friends since then. I love her for the same reasons you all love her and it seems that you guys over there just love this one thing called authenticity.”
​
With “Backslider”, we’re onto the second radio single with “County Roads” but I asked Elvie what is the plan long term through the rest of 2022? Are we looking at a couple more singles from there or are we leaning towards a new project at the back end of the year?
“It takes so long for a song to do what it is going to do, we’re looking at about twenty weeks for a song to chart for artists in a similar position to myself. I don’t know what we will get as far as more singles off this record but I’m already working on my next project and an in-between project, putting it all together and getting the narrative together. “County Roads” and that song in particular, we came out of “My Boy” and I wanted to twist people’s heads around a little bit that one hundred percent this is the same damn guy that sang “My Boy”. These stories are about how I grew up and “County Roads” is a true story as well, it’s rocking but it’s still very much a country song lyrically and I just wanted to take a risk hitting the opposite end of the spectrum where we can do anything in between. Everyone I work with are just the kind of people that just want to lay their head down at night knowing that they’re real to themselves and the greater picture of what we’re trying to do.”
So, by the sound of things, it appears the goal or plan as such for Elvie is to head over to the UK later in the year and hopefully with some new music on the way in the meantime.
“There is one thing for sure though don’t know if it coming any time soon or not, but there is one feature that I am very, very excited about. It’s with a hero of mine and I’ve named a few hero’s of mine so for now, I’ll let people just guess who it might be with. I’m excited about it, it’s a cover and it’s an older song which me and the other artist mutually respect it and he was friends with the original writer but that’s all I’m going to say for now. You’re in London, right? We’re trying, we’re looking at October right now to come over and do some stuff.”
​
The debut album “Backslider” from Elvie Shane is out now through Wheelhouse Records and available to listen to HERE. You can find full details of all of his upcoming dates on his WEBSITE and keep up to date with Elvie socially on INSTAGRAM TWITTER & FACEBOOK.