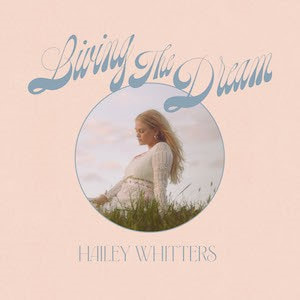 Twelve months is a long time and the last twelve months we have really appreciated how long it is, but if we rewind the clock to this time last year almost exactly to this date came the release of one of the purest, most genuine and real records to come out of music city in a long time! When I put together my top five records of 2020 piece, this was how I described the sophomore album “The Dream” from Iowa-born Hailey Whitters.
The album which came five years after her debut offering, was released through her own label Pigasus Records before entering into a partnership with Big Loud Records and Nicolle Galyon’s Songs & Daughters. Galyon along with fellow songwriting royalty in Music City such as: Brandy Clark, Lori McKenna and Hilary Lindsey all were collaborators with Whitters in the writing room on the project which tells the story of her journey from the “Heartland” to working for twelve years in a “Ten Year Town” and the end of the project where she was finally “Living The Dream”.

We all know what happened in the world this time last year with a lot of changes in the music industry. Whitters was on the road with Jordan Davis and she also played an album release show in Nashville, which she had heard numerous people telling her how this show was the last show that they saw before everything shut down. The challenges have evidently not deterred her or put an end to a dream, but if anything, she well and truly is “living it even fuller with the level of acclaim the record has received and also during last year, she also got engaged.

The exciting way to emphasise this is with new music and a deluxe version of the record featuring five new tracks that are all collaborations is released today (February 26th) via Pigasus Records / Big Loud Records / Songs & Daughters entitled “Living The Dream”. (Listen HERE)

“All of the artists featured on this project are responsible for me being able to hang up the apron strings and make music full-time,” says Whitters about LIVING THE DREAM. “The royalties from Little Big Town’s cut on ‘Happy People’ helped pay for part of THE DREAM, Brent Cobb and Jordan Davis were two of the first artists to take me on tour, Lori McKenna and Hillary Lindsey are my two songwriting idols and favourite co-creators, and Trisha Yearwood is one of the first artists that got me excited about moving to Nashville and pursuing Country music. I wanted to show fans full circle what ‘living the dream’ looks like for me – from where I started with ‘Ten Year Town’ to the bucket list moments that have resulted since I released my record, THE DREAM. I felt it was important to show them what can happen when you don't give up on yourself.”
The concept or strategy of a deluxe release opposed to an EP or holding new tracks for a future project is an interesting dilemma but not only does the fact that all of the new tracks have a featured artist make this a logical fit but as the quote Hailey had provided emphasises it continues the story. This enhances the record on the ground that it brings something that differs from the initial release but moulds the ideology further by being so cohesive.

When the album was initially released you really felt that is was a record that you not only needed to listen top to bottom but also the more you listened to it the more you picked up from it, so you would think it would be difficult to enhance further. Trisha Yearwood is a genuine icon in country music and who wouldn’t want to have her on a track? But, there is a reason why she was a fit to help continue this story. Lori McKenna and Hillary Lindsey are two of the finest songwriters in Nashville, that collectively with Liz Rose as the Love Junkies have become this magical stable which creates pure genius. The two of them were co-writers on the initial project and really bring something vocally to complement Hailey.
​
Brent Cobb and Jordan Davis were people that she spent time on the road with so again are examples of depth behind arranging a collaboration rather than just picking a name or thinking it is someone that would be cool to work with. Then finally there is that track that just really grabs your attention, that you want to singalong to and that opens the door to the wider and more commercial market with the Little Big Town collaboration “Fillin’ My Cup” that brings about the divine vocal pairing between Whitters and Karen Fairchild traded around a delightful five part harmony in this really fun and uplifting song.
“LIVING THE DREAM” Track Listing (Produced by Jake Gear and Hailey Whitters unless stated):

To extend an album often does not fit or enhance a project but this continuation completely delivers, Whitters wanted to show the development through a story and has brought impactful and meaningful new elements to this record to reflect the ideology even further that you could not fathom from one of last year’s most poignant releases. It shows that you shouldn’t just have the dream but live it!
​
You can listen to “Living The Dream” Here and keep up to date with Hailey Whitters on her Website Facebook Twitter Instagram