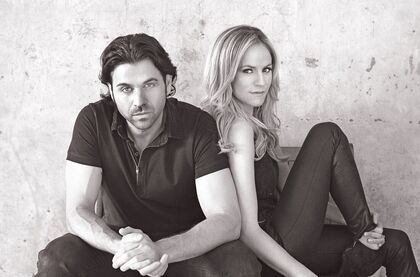 Our build-up to this years Country to Country continues as we have a quick chat with Californian duo Haley and Michaels who you can see performing across the London weekend.

1) What can the C2C crowd expect from your set?
We are going to be performing songs we wrote from our new album “Hail Mary” and a couple of covers. We’ll have a full band with us and we’re really excited because the band is a combination of musicians from the US and UK. Expect a high energy set because we just cannot wait to be there!

2) What encouraged you to want to play at Country 2 Country?
It has been a dream of ours to play Country 2 Country for years. We have heard so many incredible things about it from others who have played it. We absolutely love meeting and connecting with new fans and playing music for people who are truly engaged and excited to hear new country artists! We have heard that this crowd is magical!

3) What is your favourite song to play live?
Our wedding song “Giving It All (To You)” is always our favorite song to play because it brings us back to our wedding day. We wrote this song to be our wedding vows and we never imagined that it would take on the life that it did. It has been such a rewarding part of our journey because it has become many other people’s wedding song as well. The whole reason we are driven to make music is to connect with other people so when we hear stories of couples walking down the aisle to this song, it is the most amazing thing!

4) What sights do you hope to see while in London?
We are going to be staying in Notting Hill for a few days and we are really excited to get immersed in the culture just by going to pubs, shops, restaurants and being out and about. We love meeting new people and we have found through our travels that sometimes the best way to really get to know a new place is by striking up conversations with those who live there and just getting absorbed in it. Also, would love to see Abbey Road Studios, Buckingham Palace and anything and everything Harry Potter.

5) What 2 top facts should we know about you?
We grew up three miles apart from each other in California but did not meet until we were across the country in Nashville.
We are a duo in life and in music and love being married and working together.
Also, have to mention…we have 2 cats named after Star Wars characters. Princess Leia The Cat and Rey.
Named one of Rolling Stone’s “Artists You Need to Know” and featured as an “Undeniable Artist of 2019” by UK & US national radio personality Ty Bentli, Nashville-based country duo Haley & Michaels are known for their strong, blended vocal harmonies and their relatable lyrics. Capturing the vision of both Shannon Haley and Ryan Michaels, they sharpen a fresh, arena-size sound and embody what it means to be a pure duo on stage and off.
Introduced by a mutual friend in Nashville, the two musicians unassumingly met up for coffee and bonded over their lifelong passions for country music, discovering that they grew up just three miles apart from one another. Carving out a style of their own, the pair breathed new life into country with stadium size spark and powerful pop palatability, striking a chord immediately with audiences everywhere.

Following their emergence with the breakout single “Giving It All (To You),” the independent pair has generated over 40 million online streams in addition to landing on marquee Spotify playlists such as New Music Friday, New Boots and Wild Country. Along the way, they have performed three times on NBC’s “TODAY”, earning a fan in Hoda Kotb, and have shared the stage with the likes of Entertainer Of The Year Jason Aldean, Dan + Shay, Sam Hunt, Chris Young and Old Dominion.

After signing to Sony/ATV’s label imprint, Hickory Records, they dove headfirst into creating their first full-length studio album, titled “Hail Mary”. Following the title track’s original debut in the Netflix film Walk. Ride. Rodeo, the song was picked up by the duo's hometown San Francisco 49ers with a music video directed and produced by the team leading to a Monday Night Football halftime performance in October at Levi’s Stadium.
​
The duo finished 2019 as the most added country artists on Billboard and they are on the rise with recent features in TIME, The New York Times, Washington Post and USA Today and are excited to release their new single “Drinking About You” in the US and UK in the first part of 2020.