​The Sit Down with Ingrid Andress

Ingrid Andress got her first taste of the UK at C2C Festival in 2019. A year later in March 2020, her Grammy nominated debut album “Lady Like” was released to critical acclaim and now the Michigan native is set to return with her second album “Good Person” on August 26th (pre-order HERE).
Fresh from an all too brief trip across the Atlantic to tease the release of her forthcoming record, Ingrid has been out on the road with Keith Urban to join him on his 52-date North American “The Speed of Now World Tour” where she recently took some time to catch up with Jamie over Zoom to share more about her sophomore project.

It’s so good to hang out and it was really nice that you came to see us a couple of weeks ago which I am sure was a lovely little trip over for you.
“I loved it and it was much needed. I hadn’t seen anybody for like three years so I just had to go back and at least we got to do a small think before we can get to doing a full-fledged tour.”

I saw from your Instagram, that you have well and truly mastered drinking tea like we do with the pinky out.
“Ha-ha, yes I’m drinking iced tea now but over there it’s like thinking I’m the Queen.”

Do you prefer how we have tea and coffee hot compared to everything being iced back at home?
“Honestly, I love the hot and prefer the hot as a vocalist, that feels way better but unfortunately Nashville is extremely hot and humid so the last thing I want to have is hot tea because it’s like a human sauna out there. Whilst I’m home I drink iced black tea, but I don’t do iced coffee.”

Have you found anything else when you come over here that we do really well? People are normally too polite and talk about the audiences more than anything else, but I love that you are obsessed with our tea culture. Are there other things that you’re big on?
“Erm, Dishoom!”
​
Everyone that comes over is obsessed with Dishoom and one of the first places that all you guys from Nashville head to.
“I mean there is always such a big line and I’m always like is everybody in line like Americans do, should I go somewhere else, but they’re not so let’s do this. I’ve had curry at other places but always usually go straight for Indian food and I think your vintage shopping is really sick! That whole underground market, I could spend hours. I hate shopping but I love vintage shopping.” 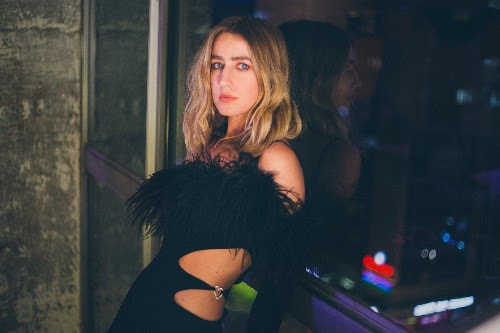 I know that you’ve only just been back and you’re on the road with Keith at the minute but I’m guessing at some point that you have a real plan to keep coming back here more and more, as much as you can?
“Yes, it is. I owe you guys a big full-on tour and there are definitely plans of that. I really look for any excuse to be able to get over there so any time my label is like would you mind heading over to London? I’m like YES, just send me and let’s do it!”

Before we jump on to talk about this wonderful new record that is coming out a month today, your last record came out literally as the world entered into well, however we want to describe it but talk about “Lady Like” quickly, do you think the timing of releasing your debut record in a bizarre way had a lot of benefits in the way that more people had so much time to digest the project all the way through?
“I think so in a really weird way, obviously it is every new artists nightmare to go through a global pandemic when your debut album comes out, but it was the time where people needed something to listen to. I know everyone was like we need to listen to happy things, but I think we were all thinking that I just wanted to be in my feelings for a second as we’re processing a lot, so I want to listen to something that makes me feel more understood in these other moods that I’m in. I’m so grateful to people that listened to it during the pandemic and sent me messages of them hearing their story in the songs. If anything, I got to know my fans in a very different way than I feel like most people do because most of the time you’re just on the road and it’s like what’s up London? I’m Ingrid! You don’t really get any hang time with anyone so if anything, it was kind of nice to be able to relate on such an intimate level.”
​
From there, we have moved on to the present and “Good Person” about to enter the world. We know as well as you do that when the record is actually released, from you’re end it has been finished in terms of the creativity quite a while before this point but for this project, when did you actually start getting it together? Was it straight into it as soon as “Lady Like” was done or has it been a complete work in progress through the pandemic and into the start of this year?
“Honestly, I wasn’t expecting to start working on the second album right away but once I realised that there was literally nothing else to do, I was like OK, here we go. I know I should be celebrating Lady Like but it’s time to move it along, so it pretty much started about a week after the first album came out. A lot of life happened to where it really was pretty effortless writing the second album because I was processing so much, getting out of a bad relationship and into a good one so the album pretty much write itself to be honest. I really didn’t have to do anything crazy, I just had to live my life and the album was done.”
Like the first record, you co-produced this record, but Sam (Ellis) was sat next to you in the chair for the majority of “Good Person”. What is it about working with him that you feel is such a good fit for you?
“To be honest, I have found that most male producers have such a big ego that it’s tough to tell them yo, I don’t like your idea, let it go and they make it so much about them. Sam is an actual musician and creative so none of us go into it with ego, it’s more what is best for the song. It is way more fun to create with people like that so that’s why Sam and I click so well because I know and I trust that he knows that my intuition is spot on and he’s not going to fight me, basically it’s because he just lets me do whatever I want.”

There are a few other amazing people who you collaborated with on this project like Laura Veltz, Jesse Frasure and I see that Shane McAnally was involved with a couple too but the one that really jumps out and when you performed this song in London a couple of weeks back, I loved it straight away and “Feel Like This” is my favorite track off the entire record. You wrote this with one of my favorite artists on the entire planet across the entire musical spectrum, who I am such a huge fan of so, I just want to ask about how you got to writing the song with Julia (Michaels) and whether you wrote it in a room together in Nashville or if it was remote?
“Yes, she came to Nashville and I think it was the second time that we had written together. Basically, we both found out that we were both fans of each other but didn’t realise it so when our publishers said hey Julia is coming to Nashville and really wants to write with Ingrid, I’m like wait, she knows who I am? YES! Huge fan! That was probably one of my favourite days because I met somebody that just was as obsessed with lyrics as I was and was as emotional so ever since that day we’ve been texting and have written more so it was a start to such a great and invaluable friendship for me as a writer and an artist.”