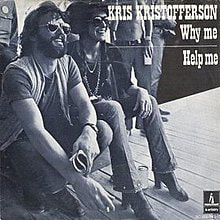 Jesus Was a Capricorn was not the only hit for Kristofferson during 1972 of the title track album. Single ‘Why Me’ paved the way for audiences to see the other side of Kristofferson they haven’t yet seen. Featuring Rita Coolidge and Larry Gatlin on background vocals, Kristofferson seemed to be seeking the help of Jesus trying to find the righteous way of his forgiveness. According to Kristofferson, he was moved by Larry Gatlin’s ‘Help Me’ - one of the featured tracks on the album. Appearing on Ralph Emery’s Country Legends, Vol 1 recorded at Grand Ole Opry’s House, Emry asked Kristofferson to tell the story behind  ‘Why Me’ Speaking about Gatlin “Well, I was moved by a song he sang in the church, Connie Smith took me to church. The night before we’ve been at Cookeville for a benefit for Dottie West High school band or something. Then Connie took over the next day to Jimmy Snow’s church.” Continuing, “I had a profound religious experience during the session. Something I’ve never had happen to me before and ‘Why Me’ came out of it.”

Kristofferson continued to talk about his experience before performing the song “I can’t even remember what he was saying but whatever it was, was such a release for me where I found myself weeping in public and I felt this forgiveness that I didn’t know I needed.”

‘Why Me Lord’ proved to be a chart success for Kristofferson making him no.1 on Billboard’s Hot Country singles that year while reaching no.16 at Billboard Hot 100 for 19 consecutive days. Aside from chart success, ‘Why Me’ went to be covered by a list of musicians including both in the same year 1973, Melba Monogamy on her self-titled album and Connie Smith ‘God is Abundant’ Geroge Jones followed the year after ‘Gospel Way’ album in 1974. King of Rock n Roll himself Elvis Presley began singing the song as part of his show and renaming the song it to ‘Why Me Lord’ that later released on his 1974 Live On Stage In Memphis.

Kris Kristofferson 1972 title track ‘Jesus Was A Capricorn (Ode to John Prine)’ is arguably one of many notorious Kristofferson’s songs to this date. Similar to the previous 3 albums, the 4th album is yet again was produced and released on Fred Foster’s Monument records in 1972 with single ‘Why Me,’ making it a success throughout the year with a string of covers came soon after.

Titled as ‘Jesus Was a Capricorn (Ode to John Prine)’ The storyteller points out in an interview how much influence and inspiration John Prine music has had on him and his writing while citing other major influences such as ‘Roger Miller’ ‘Micky Newbury’ and ‘Shel Silverstein’
“I wrote “Jesus Was A Capricorn (Owed To John Prine)” because I was so influenced by John. When I heard his songs I felt like his writing had kicked me into doing it. You take things from all over the place, though you don’t always admit it! I was really influenced by Roger Miller, Shel Silverstein and Mickey Newbury. Everybody you admire influences you somehow in your art.”

The 10 track album features a list of talented session players and rising artists from Bobby Emmons to Dennis Linde, In fact, the album also features soon to be wife Rita Coolidge on background vocals prior to their collaboration albums later down the years. In the same interview, Kristofferson mentions “There’s a crack team of Nashville session players on it – they were a tremendous bunch of musicians who had all worked with Dylan. Of course, I knew all those guys cause I’d been their janitor for years! I remember watching Dylan record Blonde On Blonde with them. He’d sit at the piano all night long and the band would be off playing ping-pong or pool, and then at 5am he’d call them in and they would cut some masterpiece. Nobody ever recorded like that in Nashville back then. It was always three songs in three hours. That had changed a little by the time we made Jesus… but not completely. I had more freedom because I was working for a publishing company that was owned by the record company, and they gave me a lot of space.”
The 2 minute and a half song opens up with “Jesus was a Capricorn, he ate organic food, he believed in love and peace and never wore no shoes” painting a picture of Jesus was nothing but a hippy and no different to the rest of at that time oppressed generation by the general public towards their way of living life and long shaggy hair. Listing the irony of the situation at the end of the song  “Most of us hate anything that we don't understand.” ​ 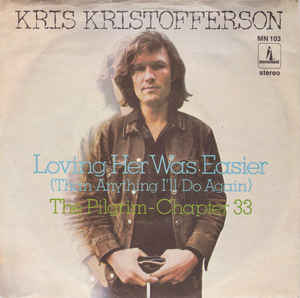 After the success of ‘Sunday Morning Coming Down’ recorded by Johnny Cash and first premiered on Cash’s national hit TV show [The Johnny Cash Show], this took Kristofferson to record his self-titled debut album of 12 tracks. Produced by Fred Foster and released in 1970, it included the songs, ‘Sunday Morning Coming Down,’ ‘Help Me Make it Through The Night’ and ‘Me and Bobby McGee’ - that was covered by blues/soul singer Janis Joplin in her 1971 album ‘Pearl’ making her number 1 in the charts. In the same year, a reissue of ‘Kristofferson’ was released under a new title of the hit song ‘Me and Bobby McGee’ after the success of Joplin’s hit.

Following that year, Kristofferson returned to the studio and started working on his second album - ‘Silver Tongued Devil and I.’ The 10 track album included a few covers, one of which was Billy Joe Shaver and Bobby Bare ‘Good Christian Soldier’& Shel Silverstein ‘The Taker.’ Possibly, one of the best-known songs out of that album is the rambling tune ‘ The Pilgrim, Chapter 33.’ A tribute to Kristofferson’s hard living heroes, he mentions in the song Cash, Ramblin’ Jack and Jerry Jeff Walker amongst others. As the chorus goes to say, ‘He's a poet and he's a picker, he's a prophet and he's a pusher. He's a pilgrim and a preacher and a problem when he's stoned.” While, at the same time self reflecting on his own ways “He's a walkin' contradiction, partly truth and partly fiction. Takin' every wrong direction on his lonely way back home”

The highlight of the album, however, was the love ballad - ‘Loving Her Was Easier (Than Anything I’ll Ever Do Again).’ Willie Nelson, one of the future Highwayman, once said that was his favorite Kris Kristofferson song, which he even covered in his 1979 album ‘Willie Nelson Sings Kristofferson.’ Indeed, the song showcases the storyteller's tender side, after listening to how he gets by in previous tracks, Kristofferson goes to narrate the influence of love his female companion has, making him forget about his yesterdays and the worries of the next, “Lovin' her was easier than anything I'll ever do again.” coupled with the songwriter’s raspy, hoarse voice.

After the release of the album, Outlaw legend and Highwaymen member, Waylon Jennings recorded the song in February of that year for his ‘The Taker/ Tulsa’ album, not to mention country legend Ray Price who recorded the song - also the same year for his ‘I Will Not Mention it Again’ album. Despite, many covering the song, King of The Road songster Roger Miller and Tompall & The Glaser Brothers had hits with the song, with Miller charting at number 28 at the country music chart in 1971 and Glaser Brothers at number 2 in 1981 when released. 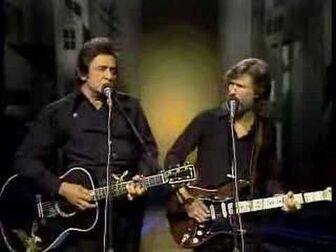 There’s something in the Texas sand that introduced listeners to a new world of storytelling in country music. Born and raised in Brownsville, Texas to a military family, Kris Kristofferson is among many of the Texas songwriters to prove such claim.
​

“Sunday Morning Coming Down” is one of many autobiographical songs penned by the storyteller that first appeared on his self-titled debut album ‘Kristofferson’ in 1970, produced by Monument records founder Fred Foster. Prior to that, however, Johnny Cash appeared on his weekly television show ‘The Johnny Cash Show’ and addressed his fans before singing the song  "Here's a song written by Kris Kristofferson, don't forget that name." How they met is a different story, that without a doubt remains one of country music finest stories yet.

Depending on who you ask. Kristofferson would often see Cash during his time working as a janitor at CBS studio when Cash came to record, Kristofferson never had the courage to approach him. However, he did befriend Cash’s wife - June Carter Cash. On one occasion, Kristofferson handed his demos to June so she could give them to John in the hopes he’d one day record his music. You’d think by know you’ve got the whole scenario down, where in fact, the opposite happened.

The story goes, after June showed Cash the demo they sat to listen as they do each night before going to bed. After the song ended, Cash said ‘Sunday Morning Coming Down is a good song,' Aside working as a janitor, Kristofferson was also working part-time as a helicopter pilot for the Army Reserve. One day during training, Kristofferson had other plans on his mind and decided to divert his way to Cash’s home on Old Hickory Lake. Once landed, Kristofferson handed a demo of “ Sunday Morning Coming Down” to Cash. Johnny Cash remembers  "As I approached, out stepped Kris Kristofferson, with a beer in one hand and a tape in the other," Cash said. "I stopped, dumbfounded. He grabbed my hand, put the tape in it, grinned and got back into the helicopter and was gone, a bit wobbly, but almost straight up, then out high above the lake where all his songs lay on the bottom. He disappeared through the clouds. I looked at the tape of "Sunday Morning Coming Down" and "Me And Bobby McGee".

Kristofferson, remembers differently, in an interview with Uncut, he says, "Y'know, John had a very creative imagination, I've never flown with a beer in my life. Believe me, you need two hands to fly those things." Kristofferson recalls, to his luck, Cash was not home that day - otherwise he would’ve shot him on the spot.

The Silver Tongued Devil and Man in Black went to be life long friends, performing and singing together including the all-star group “The Highwayman” in the 1980s alongside Waylon Jennings and Willie Nelson.