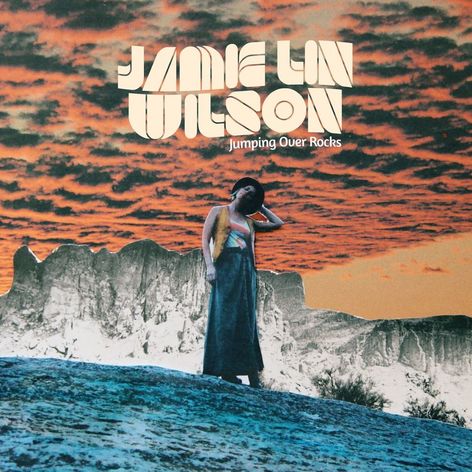 Jamie Lin Wilson shared the news of her upcoming 2nd album ‘Jumping Over Rocks’ out October 26th. The much-anticipated album comes 3 years after her 2015 album ‘Holidays And Wedding Rings’

Introducing a new set of stories to tell, ‘Jumping Over Rocks’ is an eloquent piece of art which illustrates visions of voyages, wonder, mankind and coping as the many themes the album explores. Recorded at Arlyn Studios in Austin, Texas in a span of 4 days, the album opens up with ‘Faithful & True’ a hymn-like tune carrying slow strumming, followed by a faint Pedal Steel in the background played by Cody Angel. ‘The Being Gone’ - the first single to be released from the album - is an enduring travelogue of wondrous questions of the time spent away from home, wondering whether it was as worthwhile than what’s already possessed. While ‘Oklahoma Stars’ is co-written with Turnpike Troubadours Evan Felker - who also sings harmony in the background. The 3-minute track speaks of an eventful, enchanted tale of two estranged individuals in a field of grass, under the Oklahoma dark, clear sky. As Angel’s Pedal Steel softly plays, Charlie Sexton guitar sweeps ahead like a soft southern breeze.
With her cross-blend craft of Americana and country influences, Wilson pays a special homage to hero Guy Clark alongside friend and musician Jack Ingram covering ‘Instant Coffee Blues.' This comes after her band The Trishas,  took part in tribute album for the Texas poet, ‘This One’s For Him, A Tribute To Guy Clark’ covering ‘She Ain’t Goin Nowhere.’ late 2012.

The album later follows  a tearful ballad of ‘Death & Life’ with a tale seen through the eyes of a third-person narrative of a grieving family. In a statement, Wilson said of the song “I studied people around me more for this record than I have in the past, I wrote songs from my perspective, from the outside looking in.” The highlight of the album comes in ‘Run,’ the second single of the album released last Friday, a fast rhyming tune about a friend’s toxic relationship. In a statement for PopMatters Wilson commented, “I started this song while thinking about what to tell a friend who was struggling with her marriage. They didn’t treat each other well-almost toxic. I always try to advice working it out, but I just couldn’t, but I also didn’t know how to say the things to her that I really wanted to get out.”  She continued “So, late one night I sat down with my guitar, and this song started. I still couldn’t tell her, because, I didn’t feel like it was my place. Life is hard and some people just don’t work together, but those are both things folks have to figure out for themselves, I guess.”​ The album concludes with ‘In a Wink’ - co-written with Brian Wright - a dreamy, mellow tune that depicts pictures of the songwriter’s family life, or as she often refers to it as “Real Housewives of D’hanis.” The last track ‘If I Told You’ is a fingerpicking tune which seeks guilt of unsaid words unanswered questions intertwined with Wilson’s honey sweet voice.
​
Aside from music and capturing people’s hearts, Wilson is a full-time mother who recently gave birth to her 4th baby. With now 4 beautiful babies roaming around, an album release and tour scheduled ahead it’s without a doubt Wilson is a Wonder Woman!