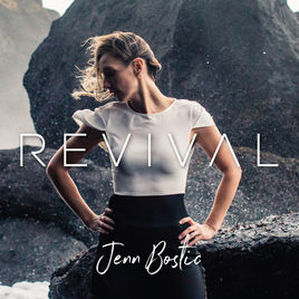 ​Jenn Bostic, an independent artist, first came to attention of fans back in 2012 following the release of the single Jealous of the Angels – a tribute to her late father. Since then she has continued to show her affection for the British audience and in 2017 won the British Country Music Association International Act of the Year. Jenn has been touring the country this week to celebrate the release of her fourth studio album, Revival, which came out on Friday and has already reached number 1 on the iTunes Singer/ Songwriter chart over here.

The album opens with the up-tempo jazz beat of Wrong Thing. The track will get the crowd going as Jenn tells of us how we are so afraid of doing the wrong thing that we don’t even try to do it right and miss out. Haunting Me tells the post break up tale of someone still being haunted by their past.
Hollywood is my favourite track on the album and featured on our Spotify New Music Friday playlist. With so many people heading to the city for their fifteen minutes of fame every year Jenn prefers the small-town lifestyle and doesn’t need to be the centre of attention. The tempo slows down for Lonely, which lets Jenn show her wide ranging vocal abilities, as she searches for peace and quiet.

It time for a catchy chorus and instrumental with Follow Your Own Star. It’s easy to follow the crowd but this track tells you to live life your own way. Faint of Heart is the heart warming crossroads tale about if you are now too old to achieve your dream and if you are holding back your loved ones by chasing your own dreams.

On her Faithful album Jenn didn’t have too many kind words to say about her husband so has made up for it with Love You. Looking back to where it all started and why you fall in love with someone in the first place. Before It Gets Better is the one step back to go two steps forward song – you will get there in the end but it won’t be easy.

Gotta Be You is all about being individual whilst not worrying about stereotypes and what other people think. Jenn continues to show her wide ranging vocal talents with Lamp. A song about determination and knowing you are capable of achieving anything you put your mind to.
​
As the album winds down, we have further life lessons of determination with Too Easy which brings the tempo to a mellower level. The album concludes with the title track Revival. The message of Jenn’s album all comes together as we reach the point of achieving your goals.

Jenn has given fans an insight into the life of an international independent artist who doesn’t get to travel the country and globe on private jets and stadium size crowds. If artists like Jenn didn’t dream big and set out every week to live their passion would country music be what it is today? This truly is a heart-warming album about living every day to the fullest in your own way.

​This week Jenn has concluded her UK tour but you can check out our review of her Bush Hall show in our Live Lounge. We hope Jenn will be returning to the UK for another tour soon.