​The Sit Down with Jess and The Bandits

A planned break after the 2019 UK tour ended up significantly extended for International band Jess and the Bandits. With Jess based in Texas and the Bandits in the UK, the pandemic restrictions were felt even more acutely for this fun loving, crowd pleasing band who thrive on live performance and tour life.

Frontwoman Jessica Clemmons formed her Bandits in 2012. With her big voice and warm personality, the Texas native felt an instant connection with the four Brits who made up her band and shared her love for authentic country music. Though over the years members have come and gone as they carve out their own musical journeys, Jess and the band have forged her own brand of UK country, releasing music to critical acclaim, touring extensively and growing a dedicated fan base along the way.

Jess’s’ family grew from 3 to 4 in 2021 with the birth of her second son and she is looking forward to introducing both of her baby Bandits to the UK and the world of a touring artist! Jess has been delighted to spend time working on new music over the last couple of years and is excited to announce a brand-new Jess & the Bandits album set for release in 2022. Whilst she was over for a string of UK dates in May, we caught up with Jess to get all the latest on new music and how much she has been looking forward to this long-awaited return across the pond.
“It’s like trying to pack what’s been the last two and a half years into thirty days so actually being able to catch up with friends that I haven’t seen, then do stuff with the family, have some writing sessions and everything we can do whilst I’m here along with a few dates.”

We all know what happened in the world over the last couple of years and it is wonderful to see Jess being back over here, so firstly and most excitingly it looks like this trip will be coinciding with some brand-new Jess and the Bandits music being released.
“We have two new songs on the horizon, a very near horizon. We’re just waiting on the mastering to be finished, so we should at least have one single out in the next couple of weeks and another to follow shortly after that. Then, the hope is to have a new album by the end of the year which we will hopefully be able to tour, and fingers crossed we choose a time to tour when not all of America is here at the exact same time.”

Me and Jess talked about creating new material during the pandemic and if there had been any changes to her sound along with how technology was able to assist the process.
“We finished in November 2019 after doing a tour and I was supposed to be back in March 2020 until the world stopped and it was like what do we do? You try to do what everyone was doing and try to stay connected in whatever way you could. In a way I’ve spent the last fifteen years back and forth between Texas and the UK, so it was a break that I didn’t know that I needed. Especially with my life changing so much with a husband and kids so it was nice to be able to start bringing that into my writing. It’s changed the content a bit and making a bit more, I’d say grown-up but still keeping that fun Jess and the Bandits feel that we are known for which honestly is my personality. Being able to do things over Zoom and in fact the two songs that we recorded, the producer was on Zoom and the band was in Houston, so technology has taken things in a whole different direction but brought the world closer together.”

By the sound of things, all of the new music that is on the way is from after the world changed and is all brand-new songs as opposed to things that had been in the locker prior to the pandemic.
“It’s all from pretty much when everything stopped. It was like, what else is there to do, so I guess it was let’s get creative and start writing. I’ve done Zoom sessions and quite a few with my writer friends in Nashville so we’ve got quite a bit in the pipeline and a lot of really good material to make a great album. This will be the third album and I just want to make sure that it’s incredible as it’s been so long since we released music that it just knocks everybody over.”

There has obviously been a gap between releases, and she had reiterated that she wanted to put out something that was really strong but whilst the creative process would have been constant and allowed a lot of time to perfect this forthcoming project, I asked Jess about whether this could have created the potential to dwell too much and think too hard about what was going to fit into the new material.
“I think for me, that’s why I just start writing. When doing the sessions, it’s whatever kind of theme or sound comes to mind, that’s what we and by the end of it the hope is that you end up with a good twenty plus songs that you can narrow down to ten or twelve that all somehow work together. You find that it ends up happening naturally that way and you end up realising that as you start writing you are writing in this direction or this theme. The beginning songs may be completely off the later ones and it’s almost like it’s a puzzle that you piece together.”

Jess had previously mentioned how she had been back and forth between the States and the UK for around fifteen years and the pandemic presented the longest gap between visits in a long time. After this gap and anticipation about her return, we talked about what she had really missed and had been most looking forward to about returning over here.
“For me it’s hugging my friends over here and getting back to something that has just become almost a part of my personality for being over here in the UK. Oddly enough, things like just being able to hop on a train or the tube because in Texas we just drive everywhere and just performing again. I’ve performed back home but it’s just different, it’s a totally different situation with how I do things at home to when I come over here to perform it’s almost like performing for friends and that is something that I have missed so much. I did a writers round in Birmingham the other night, which is such a fantastic setup that Gasoline & Matches put on and I found myself towards the end getting really emotional thinking I’m finally back here and it’s finally happening again. Then also, we almost get to reintroduce ourselves again to our fans that we had but also a whole lot of new fans. That was my little warm up I think and a good way to do it. The other shows will be full band where we are doing a festival in Scotland, then we are in Glasgow, Manchester and London.”

Whilst small children have helped her burn off plenty of energy, the return to the stage playing with the Bandits once more is something that she has been really looking forward to and unleash her own energy on her return to the UK.
“It’s nice to do what I do again. I’ve been wife and mom for the last two and a half to three years which is of course a very rewarding job but there’s a part of me that hasn’t been used, so it’s really nice to do what I do and exciting to perform new songs. We’re going to go ahead and throw two of the new songs into the setlist, so we will be debuting those on these dates too which is really exciting, and I can’t wait.”

Ticket information for all of these Jess and the Bandits tour dates is available HERE whilst you can make sure you don’t miss any news about forthcoming new music by following socially on INSTAGRAM FACEBOOK & TWITTER.
​ 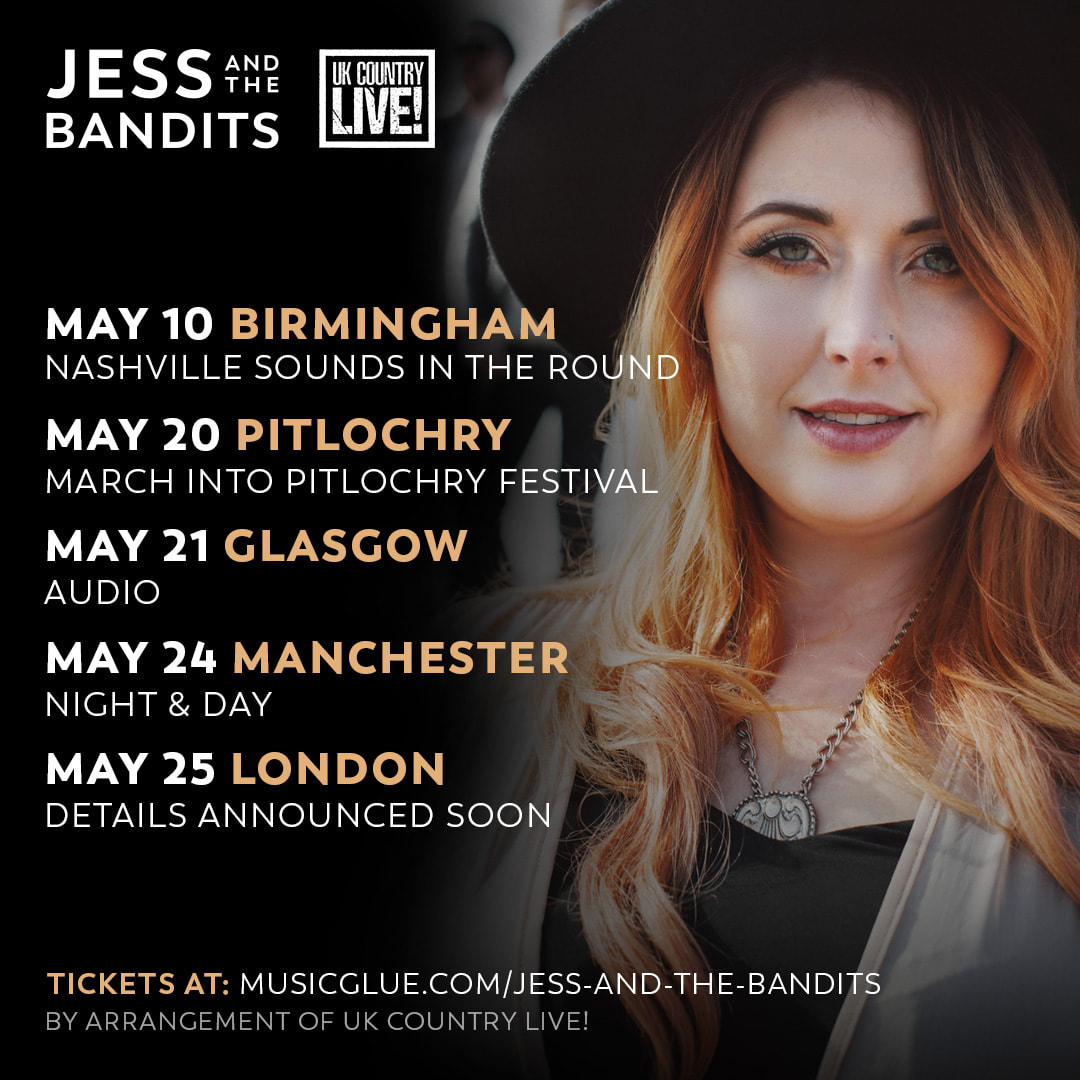