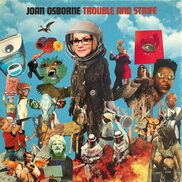 With 2 singles already out "Take It Anyway I Can Get It" and "Boy Dontcha Know" singer/songwriter Joan Osborne is set to release her 10th studio album Trouble and Strife September 18th  via the label she founded in 1991, Womanly Hips Records.This is Osborne first album of original material in six years which she self-produced the new collection and penned all ten songs, with two co-writes. ‘Trouble and Strife’ finds the gifted vocalist offering a strong yet uplifting response to some of the socio-political issues plaguing the USA over the last several years. Osborne beautifully balances the weight of her messages with solace and optimism.
‘Take It Anyway I Can Get It’ is the opening track from the incoming ‘Trouble and Strife’ LP. Released as a single today, it’s a soulful calling to brazenly live life to the fullest. The roots-rockin’ cut inspires with the mandate “I’m still survivin’/I got to be dancin’”, propelled by a joyous gospel-tinged vocal attack backed by Wurlitzer and Southern-style intertwined guitars that dare you to sit still. ‘Boy Dontcha Know’, also out now, touches on gender nonconformity and the challenges faced by women in today’s society to the tune of Osborne’s purring vocals, Spiders from Mars-era piano and Big Star-esque Mando-guitar.
On her tenth studio album, the masterful ‘Trouble and Strife’, Osborne has issued a clarion call. With stunning vocals, a diverse range of sonics and incisive lyrics, this deeply engaging collection of new original songs is her response to “the crazy, chaotic times we’re living in,” she says, and “a recognition of the important role music has to play in this moment. Music has a unique ability to re-energize people and allow us to continue to hang on to that sense of joy of being alive.”
Since she broke through 25 years ago with the multi-platinum ‘Relish’ and its touchstone mega-smash ‘One of Us,’ the seven-time Grammy nominee has never played it safe. Osborne has followed her restless musical heart, exploring a diverse range of genres: pop rock, soul, R&B, blues, roots rock, gospel, funk, and country – all of which can be heard on ‘Trouble and Strife’, along with the Western side of C&W and a touch of glam and disco. “For a lot of the record, we were going for a ‘70s AM radio vibe,” says Osborne.  As for the lyrics, the songs “are the most political I’ve ever written,” she conveys of her first album of originals since 2014’s confessional ‘Love and Hate’.
Throughout her quarter-century, multi-Grammy nominated career, Joan Osborne has never been an artist confined to one space. She has utilized her incredible voice through her own songs while also becoming one of her generation’s finest interpreters. Osborne has shared the stage with artists ranging from Stevie Wonder and Mavis Staples to Bob Dylan and Lucinda Williams and she continues to seamlessly blend into any genre. On Trouble and Strife, her tenth studio album, the need for her voice and words has never been stronger.

“I feel like music has this important job to do right now,” Osborne says. “Part of that job is to help imagine a better future – and to hang on to hope. I want to play for people and get them up on their feet and dancing. To let music do that thing it does – bring joy and energy because we really need that right now.” With ‘Trouble and Strife’, she intends to do just that.

You can pre-order ‘Trouble and Strife’, due for release September 18th via Womanly Hips Records,  here: https://orcd.co/troubleandstrife
​