CitUK speaks with Josh Turner about his upcoming album - Country State Of Mind.

​On August 21st, multi-platinum-selling country music star Josh Turner will be releasing his new album. This though is an album with a difference as he pays homage to a cross-section of classic country music icons. We caught up with Josh to find out more about the record and how he looks back on his time in England last year were he closed out The Long Road Festival. 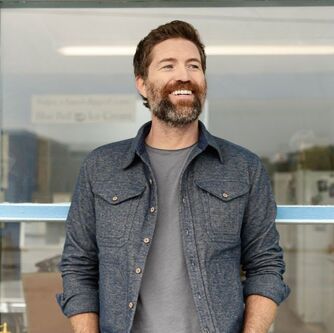 Country State of Mind is going to be released on 21st August. It’s a studio album unlike any you have done before, what inspired you to do this album?
My manager and I were kicking around the idea of how a lot of younger people recently have been digging back into 90’s country music that they didn’t grow up on. When I was growing up, all I listened to was 80’s and 90’s country because I’m part of that generation. We started to talk about doing a record with that kind of stuff on it but I decided to take it a step further and go all the way back to the early 50’s and work my way towards the present day. There’s a huge variety of classic country songs. There’s a lot that people will know and recognise as big hits and then there’s the ones that were never released as singles and are more obscure. I think it’s going to bring back memories for a lot of people but it will also educate some people on music they may have missed.

With this release following I Serve A Savior, how refreshing is it to do these personal projects?
I was so honoured and pleased to do the gospel record and it was a big success. We not only did the record but the live performance DVD, people are still buying and talking about it. We’ve now turned it around and doing an album of classic songs shows I’m still living the dream and get to do what I love doing day after and make a living from it. It’s been great.

How long was the original list of tracks you wanted to put in the album?
There was a lot of songs that I sifted through; I didn’t necessarily have a list but I listened to a lot of songs to try to make sure I wasn’t missing something obvious. There had been a good long list of songs in my mind that I want to do like I’m No Stranger To The Rain, Midnight in Montgomery and then I started to think about that I wanted to make sure I was doing an Alan Jackson, a John Anderson song, a Randy Travis song. I managed to get Kris Kristofferson to sing with me on this record which was such a dream come true, he’s 83 years old and a country music legend. The fact that he was willing and able to sing on this record is just kind of mind boggling. There were a lot of songs that were pretty obvious, but then you have songs like The Caretaker which a lot of people haven’t heard and the old Hank Williams song, Alone and Forsaken – there’s some pretty obscure songs on there.

With such a distinctive sounding voice, was there every a worry your sound may change some of the songs too much?
There were some songs that I tried to be myself on. I’m No Stranger To The Rain is one of those, I’ve Got It Made, obviously singing with John Anderson I wasn’t going to try and sound like John Anderson! I tried to sound like myself on most them, the only one I tried to channel the original artist was on The Caretaker and Good Ol’ Boys. It’s really hard not to channel the original delivery on those songs.

There are currently two tracks available from the album, what kind of reception have you had to these?
People have been loving it! They’ve been excited about both of them and loved the fact that I redid a Hank Williams Jnr song with Chris Jansen on it with me. I’ve had a really positive reception to I’m No Stranger To The Rain, so many people have loved that song and many have said it even sounds better than the original – which sounds impossible to me but is a huge compliment.

How important do you think an album like this is to showcase classic country music icons and songs to newer listeners?
It’s educational and shows listeners that weren’t country music fans before what it is made of. I’ve always said you can’t just say you’re a country music fan or you don’t like country music. You have to be more specific because country music is so vast with all the different styles within country music, you can’t generalise it. You can’t say I don’t like country music. I assure you, if you listen long enough you can find something that you like. If you go to a Grand Ole Opry show, you’re going to hear different artists and they’re all going to sound different with their own unique style. I think the thread throughout it is the storytelling comes from honest, hardworking people that are fighting for something they believe in which ties it all together.

You have said about being fortunate enough to record some of the newer versions with their original singers, including Kris Kristofferson. What kind of reaction did you get when you told them about the project and that you wanted them to be involved?
Kris was very honoured and grateful that I had chosen Why Me, I really didn’t know what to expect when I asked if he would sing on it. I’ve known Kris and his wife, Lisa, for a long time and happened to send Lisa a text at Thanksgiving last year and asked what the possibility was of Kris singing on the song and her literal response was when and where. That just blew me away as she was willing to make it happen, no matter what it took. I was thinking, you don’t have to come to Nashville as we can send you the tracks and you can do it wherever you want as they live in Hawaii. We sent it to them and he did it on his own time, Lisa sent us videos, and it was very surreal and an honour.

Were you quite nervous sending out those messages?
Yeah! You always set yourself up for rejection. I did get turned down by several artists, so to get Kris to agree and seeing what a great job he did has created a special moment for this record.

There are several more all-star collaborations in the album, what was it like working with the likes of Chris Janson, Runaway June and Maddie and Tae and what was they’re reaction to the project?
When I reached out to Runaway June, I told what song I was doing and the first response from Jennifer I got back was that’s literally one of my favourite songs of all time. I thought to myself, I guess I’ve picked the right people for this one then! They came in with so much excitement and energy, they did a really good job with it and I am very pleased with the outcome and the end response.

In a time where live performances are limited, how are you planning on celebrating the launch of the album?
I’m waiting to hear what my label have in mind! I have a few dates planned around that time, but with the pandemic everything is up in the air so we are trying to figure that out. I will be doing some things around the launch, but what that looks like right now I can’t exactly be sure.
You have got a few tour dates in the diary; how much are you looking forward to these and getting back on the road?
I’m beyond ready. I’ve been ready since I got off the road back in March. It’s been hard to not be able to go out and work but I’ve got a lot of things done. Seems like every day, every week I’ve been busy but I’m ready to get back out there and make some money again!

After so many months at home, will it be odd saying goodbye to the family?
That’s going to be hard. I’ve ben enjoying not living out of a suitcase and being able to sleep in my own bed every night, so that’s going to be a big adjustment for me. I’m sure they’ll need to adjust to life here at home without me too.

You made your first trip over to the UK almost a year ago now. How do you look back on that trip?
I had so much fun over there. I didn’t really know what to expect. It was my first trip to England and I didn’t know what to expect. I had so many people tell me beforehand that the fans are really reserved and they don’t really respond when you sing a song – they might clap a bit and that’s about it. They almost set me up to believe we were just going to be playing to these dry and quiet crowds but from the moment I took to the stage at Union Chapel it was the complete opposite. The fans were ready for country music, my kind of music, and they made me feel right at home and made my job easy when I went out on stage. When I played in Manchester and at the Longroad Festival it was just incredible and a great experience. I got to spend two days at the British Museum, which was pretty awesome, and got to walk around London a lot. It was a fantastic trip, the weather co-operated, the fans were great, everybody treated me like family over there so I can’t wait to do it again.

How did you find the UK festival experience different from those in America?
I think the biggest difference for me was that I didn’t have my bus! I was hanging out in catering and behind stage instead. It was a fun festival experience.

Is Europe still high on your radar at the minute?
Yeah it is. I’ve been to England now, I’ve been to Switzerland, I’ve had offers to go to other places but haven’t been able to make it work yet. I definitely want to get back when the time is right and I’m thankful that the fans are wanting my over there and I’m glad they want me to come as that makes me feel good.
​