Anyone looking at the poster for this week’s Nashville Meets London event would have expected a fairly normal show consisting of an opening act (Alyssa Bonagura) followed by a headline act (Julia Cole). If you thought this, you were wrong! Julia Cole and Alyssa Bonagura had different ideas. What was sold as a Nashville Meets London showcase could have been sold as The Bluebird Meets Pizza Express.

As Absolute Radios Matt Spracken came on stage to introduce the evening, he was even unsure of what was to come as he revealed the unexpected change of plan to the packed venue. Matt was though able to introduce homegrown country artist Jake Morrell to take to the stage for a short solo set. Having seen Jake recently accompanied with a full band at Manchester’s Buckle and Boots Festival it was nice to see him perform an acoustic set to get the crowd ready for what was to come.​

As Jake left the stage, Pizza Express staff scurried round the venue clearing dinner plates and taking the final drink orders before the main event. I always find this a strange venue to come to due to its set-up with table service and munching on a pizza while an artist is performing, however it definitely gets rid of the groups of people shouting out orders at the bar or just mingling for a chat throughout the opening acts. 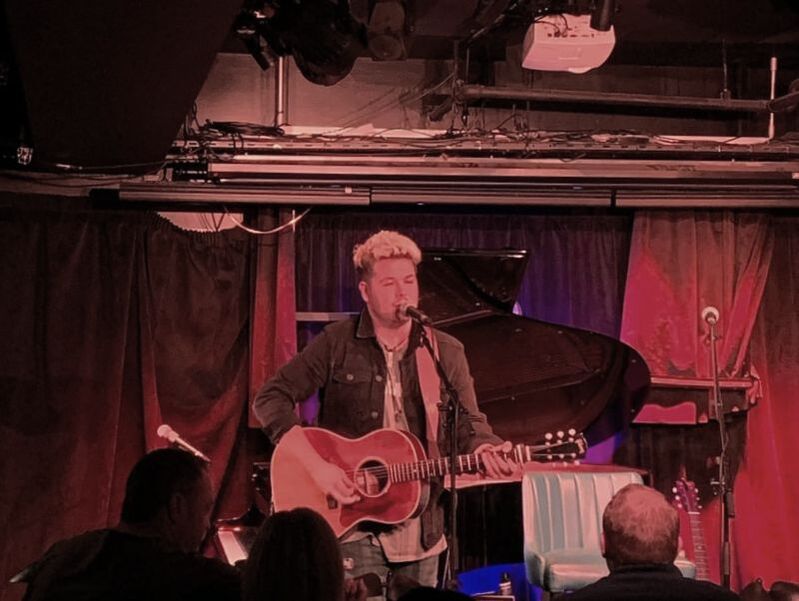 Julia and Alyssa came on the stage - guitars at the ready - together to introduce their own take on the evening in the form of a Nashville style songwriters round, which had actually only been decided about during the soundcheck earlier that evening. While I’m sure those close to the organisation of the night had a few nerves about the late change, the two artists and the crowd lapped it up. Songwriter rounds are beginning to be a more regular occurrence in the UK, with it giving a much more intimate feel to the show and Pizza Express Live in Holborn is certainly a perfect venue with the crowd packed in around the stage. Taking over the hosting duties for the night, the pair wanted to make sure it was going to be a night for those watching to remember promising plenty of surprises.

The pair took it in turns to sing a variety of new and old songs of theirs, and even made their way to the venues grand piano for a song each, with Alyssa opening the set with her latest single New Wings. As the pair traded songs and stories, Julia performed several of her recent singles – including Things I Can’t Say (recorded as a duet with Spencer Crandall) and one of her early releases Trust You. Along with this performance, Julia was in the country to celebrate her sisters upcoming wedding this weekend and there was plenty of love being shared by Julia towards her watching family and future brother-in-law. With Alyssa having spent her summer in England, there was also a chance for the pair to turn the set to their summer songs – for Julia this was another track originally recoded as a duet with Renee Blair with Somethin’ In The Sunshine and for Alyssa it was an opportunity to share the story of how Aerosmith’s Steven Tyler ended up recording her sunshine related track I Make My Own Sunshine on his country album. Every ear in the underground venue was listening intently to the tales the pair shared, and every word being sung. As they left the stage for an intermission there was a buzz of excitement around the venue that there was still more to come from the pair and their upcoming guests. 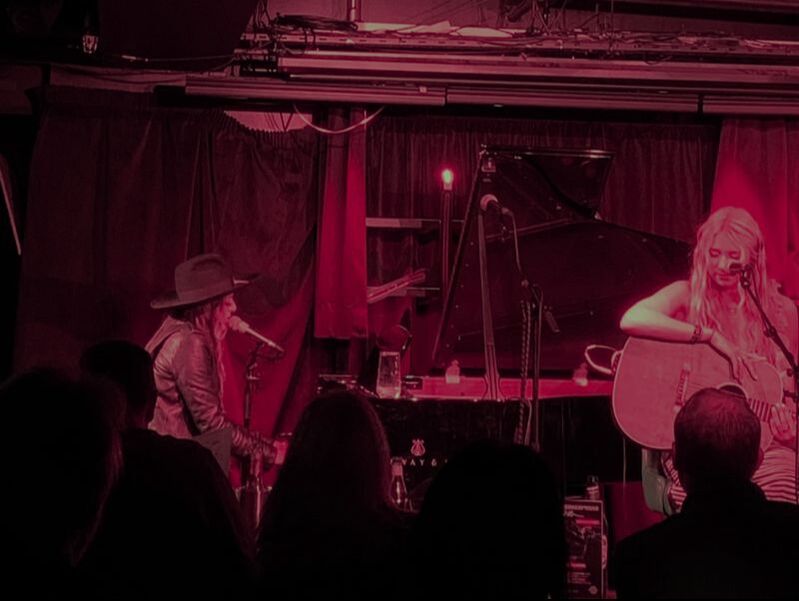 After a short break, the pair returned to the stage and promised the surprises weren’t over. First off, Alyssa bought on Tim De Graaw to play a song that is going to be a sure fire hit in Drink About It – the tale of their trip to Greece and going out on a strangers boat with the hook line that he told them “Don’t think about it, drink about it!” - before Jake Morrell returned to the stage to make a country music super group with Julia on piano. The group wasn’t done yet though as next they called on Twinkie to join them too as they sang Florida Georgia Line and Bebe Rexha’s Meant To Be. 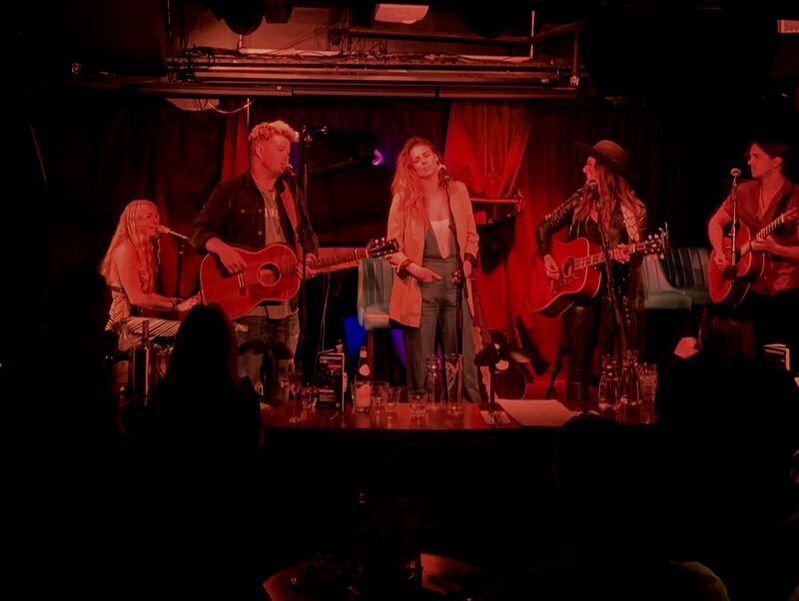 As the pair bought the night to a close, they certainly had made it a Nashville Meets London event to remember by bringing their own twist and a little slice of The Bluebird Cafe to Pizza Express Live.

Country music fans in the capital don’t have long to wait for the next Nashville Meets London event as Gary Quinn, Katee Kross and Kelsey Bovey take to the Pizza Express Live stage on Tuesday October 12th with tickets on sale now for it is sure to be another memorable night of country music in the capital. 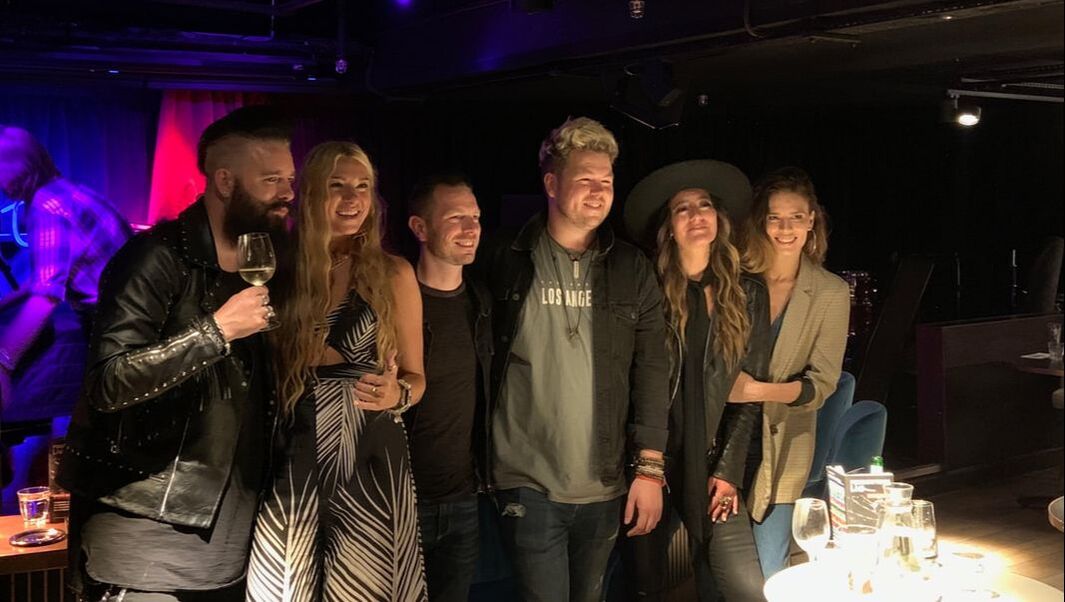