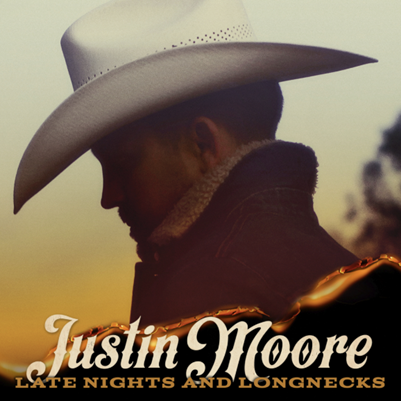 It’s been ten years since Justin Moore released his self-titled debut album. With three number one albums and seven number one singles, Moore has returned with his fifth record today – Late Nights and Longknecks. The Arkansas native has once again taken a no frills focus to his music with a focus on small town life. With a writing credit on every track, Moore feels he has found more freedom in his writing this time around as he looked to give the album a 90s flavour - “Obviously there are reasons why we record certain songs and certain albums, and I think just being 12 years into this now, when we wrote all these songs I said, ‘Let’s just not worry about three minutes and you know we need this type of song or we need that type song.’  You know, there have been times in the past where I go, ‘Man we really need a tempo or we really need a ballad,’ or whatever.  And you have to be cognizant of those things but I didn’t really care on this album. I just kind of was like, ‘Let’s just write the best songs we can write and then go from there.’ And I feel like we did that.  And every artist will also tell you every single album is the best they’ve ever put out, me included. But I genuinely believe that with this album.  I truly do.”

Having spoken about giving the album a 90s flavour, Moore called in David Lee Murphy as a co-writer on the up-tempo opening track, Why We Drink. The track ensures there’s never an excuse to to not have a drink, whether it’s the weekend, raising a drink, celebrating a victory or, as with England this week, it’s hot out! 'Cause our team lost, 'Cause our team won, 'Cause Sweet Home Alabama just came on, 'Cause we're lookin' for a reason to raise one.

A proud father takes a step back and looks at his son in That’s My Boy, while Moore’s current top ten single – The Ones That Didn’t Make It Back Home – is his opportunity to raise a beer to all those who have been taken too soon. "It’s dedicated to all the ones that didn't make it back home. Soldiers, first-responders, doctors, nurses, teachers, students... every person who made the ultimate sacrifice, while fighting for what and whom they love."

Jesus and Jack Daniels offers a glimpse at the mix of parents when a mother follows Jesus while the father loves to drink JD. With the family mixture of faith and alcohol, they take on the world – ‘I got a little bit from both of them, A little Bible and a little buzz’. Airport Bar gives the opportunity to people watch while also daydreaming of where you would be now if you hadn’t missed your flight while Small Town Street Cred takes a look at the small-town priorities as you build your street cred as a teenager with little knowledge of the outside world.

We’ve all said it. Never Gonna Drink Again is a track that tells us just that. As you head out for a heavy night on the town and keep going till the early hours, you know exactly what you’ll be telling yourself when you struggle to get out of bed the next morning. The drinking theme continues with On The Rocks, as it’s not just the whiskey that’s on the rocks in this drowning your sorrows break up song. The morning after the night before is the scene for Someday I Gotta Quit, when Jack Daniels is no longer your friend.

The album closes with a good message to the listener in Good Times Don’t. As Moore takes a look around and sees everything around us changing day to day it is important to remember that despite all this, a few drinks with those closest to you will always been the same.

In an era of people asking what is country music, Justin Moore has taken it upon himself to ensure he stays original and stands by his sound. It may not get him a headline slot on a stadium tour, although, if people take their time to listen to music without a pop or over the top instrumental focus they might just find what country should be.