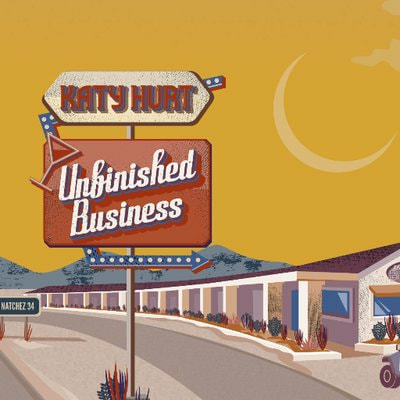 Katy Hurt has been up and down the country in recent months to perform tracks from her eagerly awaited EP, Unfinished Business. After months in the making the day has finally come for Katy as the five track EP is released.
​
If you haven’t heard of Katy's music before you will instantly be drawn in with the fine vocal performance and storytelling in Drink. We discover the struggles of a relationship when one likes to have a drink and more shot before heading home late and the arguments start. Straight away though, we see the range in Katy’s voice as the tempo drops and you’d almost think it was a different singer. Natchez sees us leaving a relationship, which you know is for the best - I wasn’t living a life, I was just living a lie - despite having concerns that it won’t be easy to move on.

Despite the slower tempo in Natchez, it doesn’t stay slow for long. The banjo comes out for the full throttle, pedal to the metal Revved Up. More and more English artists are looking to American style tales in their tracks and this is another example as we are on the run from the police with the bad boy of your dreams not quite sure where you’re going to end up - those blue lights chasing us all through the night.

See Ya Later was the first single released from the EP in July last year, it poses a dilemma of when a guy is really keen and wanting to start a relationship despite you just not being that keen. He may have all the lines but you feel like you’ve heard them all before and can already see exactly where it will end up - I know you won’t give me your world, I’m not that different from other girls. As the EP closes out we get the title track, Unfinished Business, it moves on well from the previous track as we get flashbacks to a previous relationship that didn’t turn out how you’d hoped and has left you struggling to move on - like a hurricane went and stopped me in my tracks.

Katy has done an excellent job in this EP to put her own mark on a record as there is only one piece of unfinished business - we want more. It has a true to the heart country sound and will tick the boxes for many listeners and there is no doubt it will introduce her to a wider audience. Having already performed at both C2C and Black Deer, fans are bound to be asking for more now as she has shown she can perform slow tracks, uptempo ones, break-ups and a good old drinking tale. There are now bound to be people doing a quick google search to double check she is actually a UK artist!

There are still opportunities to catch Katy perform over the next few weeks and we are especially excited to see her perform at this years Long Road Festival.