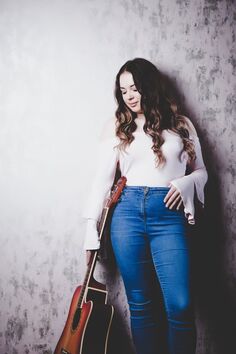 How does it feel knowing the debut EP is coming out?
It’s such an exciting feeling knowing something that you’ve worked so hard on behind the scenes is finally being released into the world. Being so proud of this EP and after the success of Magnetic going to #2 in the Country iTunes Charts, I can’t wait to see where this goes and the way others will interpret how this means to them individually.

How would you describe the album to a new audience?
This EP represents who I am as an artist and who I am as a person through my lyrics. This record is something I want people to let their hair down to and not feel judged by yourself or others. There are influences from Sam Hunt, Maren Morris, Kelsea Ballerini and Taylor Swift so if at least one of these artists tick your box then there is something in there for you.

With Magnetic reaching number two on the UK Country iTunes chart, has the positive response surprised you?
I was not seeing that coming at all. I was so overwhelmed by the amount of love and support it was shown and to see my name above Dolly Parton and The Shires was incredible. Another thing that struck me was that overall it landed at #65 all genre which was absolutely crazy. I had no doubt the potential it could have, as I work with the award-winning Puzzle Maker Studios, but nowhere clear to where it ended up.

How important have the UK Country Radio stations been to you early in your career?
The UK Country Radio Stations have been incredible and I owe a lot of this success to them. As an emerging artist only starting on the scene last year, radio play is massively important as it helps our music reach different audiences all around the world. Having Country Hits UK Radio and Chris Country Radio both supporting my single frequently has made a massive difference and knowing the level that they like to represent on their shows, it was a big honour for me to be part of it.
​
With the current move to performing online, how has this intimate interaction helped you?
It has helped me grow my social platforms as well as my confidence quite drastically which I did not expect. Live streams have been a life saver as I’m not able to play shows it has helped me reach many areas that I never thought I could. Performing on these live streams and receiving comments from viewers saying that they are from Norway and Poland was crazy. It is also lovely to have conversations with people on live streams as this wouldn’t necessarily happen in a live gig setting. I find it an opportunity for the viewers to get to know more about me on an intimate level as well as making them involved including requests to make it inclusive for everyone and that people have a safe space to talk openly about emotions, personal experiences or just to have a good time.