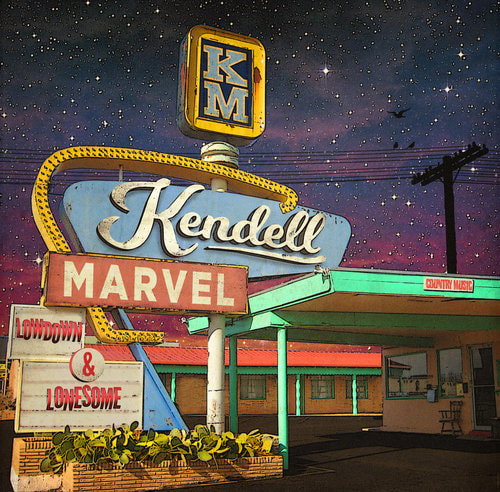 Kendell Marvel recently wowed UK crowds during the recent Brothers Osborne tour. Just a week after the tour wrapped Marvel’s album Lowdown and Lonesome has become available this side of the Atlantic. Having been a fixture in Nashville for the better part of twenty years (after growing up in Thompsonville, Illinois) now Marvel has stepped aside from writing hit songs for the likes of Chris Stapleton, Jake Owen and George Straight amongst others to take his turn in the limelight and personally use some of his own songs. Marvel has writing credits on 9 of the 10 tracks from the album. Of the album Marvel has said “The songs are real, they’re gritty – a combination of hurt-like-hell heartache and rowdy rebellion”

We open with the title track and one of the rowdy rebellion ones - Lowdown and Lonesome. Marvels gritty voice adds to the tale of this post breakup track about drinking your way to rock bottom. Gypsy Woman slows the tempo down and introduces the listener to a free spirit moving from town to town and you have to realise she may never come home. A track that will have the listener hanging onto every word.

The band kicks back in for Heartache Off My Back as Marvel looks to move on and enjoy life before we are reminded to Watch Your Heart and make the right choices before anyone’s heart gets broken.

Chris Stapleton will be familiar with the next track – Untangle My Mind. A bluesy jazz touch about finding yourself. Tryin’ Not To Love You brings a bit of boot stomping to the album as we are now regretting a break up and struggling to move on.

Hurtin’ Gets Hard continues a sombre tone with a realisation a love one won’t be returning. Closer To Hell picks the tempo back as you admit all the wrong choices you’ve made

That Seat’s Saved is keeping up hope that a loved one will walk into the bar so you need to save the seat, just in case. The album concludes with Charlie Daniels’ Drinkin’ My Baby Goodbye.  A fitting end to a storytelling album about not always making the right choices.
​
While the album may not have the most uplifting summer time lyrics you can’t help listening none stop to this one with its mix of up tempo, Marvel’s gritty voice and thought provoking lyrics.