We sit down with Kenny Foster during C2C Berlin 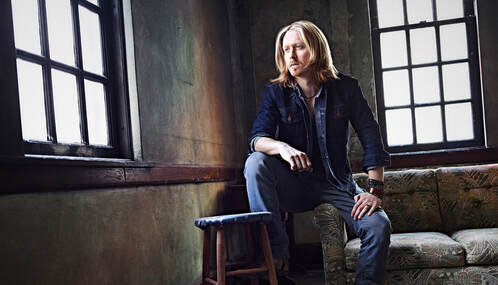 Welcome to Berlin. How is your German language knowledge?
Awful! I speak some conversational Spanish and that’s about it. Then you arrive in a country like this and everyone can speak about four languages and perfect English so you just have to hang your head.

Did you ever image you’d be able to bring country music so far away from home?
I’ve got to be honest, no. I wouldn’t have even known to dream it. I’ve always loved Europe and been quite obsessed with it. It all started with England actually, I was a big Monty Python fan and played soccer. When I was 12 I came over and played with a US Development squad and ever since then I’ve just loved it and love coming over here. My wife and I first came to Germany back in 2006 for the World Cup, we had tickets to all the US games and did a lot of travelling about and the whole backpacking thing. To think I would get to come back and play and do my work and art for them is really cool. They’re gracious to accept it in a language that is not their own and they still accept it. It’s beautiful that they still sing along, I know I couldn’t do the same in German as I feel like something would get lost in translation, I’m sure. I love a lyric and turn of phrase and I got really worried last year at my first show and was like oh god are they even going to understand me, but they did.

You finally have some new music, it’s been ages.
Dude I know and it’s mine fault.

It must have been about two years now?
It has, honestly as an indie you kind of have to get a hold of things. You don’t have a whole team of people that are doing this for you and I released deep cuts as a big drop, it was just like here I am. Back then, I wasn’t even sure if I’d get to even do it again, I didn’t know all this would happen. You have some people who are attached to a label early and have a rocket ship ride but that’s not been my story. We’ve been in the trenches and now put out a single as a duo with Sarah Darling even though it’s a cover (Country Roads). We did it originally as we did something here in October and did a little video that CMT picked up so we decided we should probably put it out there on streaming platforms. I’ve now got another duet single coming out probably in May time. There will then be a full new happy record later this year. I’ve had plenty of time to write all the songs and I’m picking the best of them. When I finished Deep Cuts, I wasn’t even sure if I’d ever be able to do it again and I’ve got songs that I’m so excited about. I can’t wait to come back with a full band and show people that side of my music.

C2C has been a real opener for your music. How important is that for an independent artist?
It’s extremely difficult to break new markets in the states because the infrastructure is built for the insiders and I did not expect these opportunities. I didn’t know how long I’d be touring over here for before getting the chance. I feel like it’s a great testament to them and a great emotional boost for me so I know what I’m doing is good and can be set apart in this way. To have that was so fulfilling for me and it has kept this thing going so I’m really greatfull to C2C. It’s been really special for me and it’s been a nice way to find my way.
You have almost a cult following across the UK, they come out and hype you up. As soon as your name is announced for a show, they get excited. Do you see surges trends from European fans?
It’s beautiful, when you tour solo acoustic it takes a listener to really appreciate what’s going on and that’s why I would appreciate bringing a band soon as more people will then get on to what I’m all about. That’s why I love it, it’s a very if you know you know kind of thing and I don’t mind being the underdog – I feel like I’ve been that a lot of my life. It suits me.

As a big football and Tottenham fan, your stage time conveniently finishes before the games start.
Isn’t that interesting! The only down side is the Tottenham game is right when the main stage starts. I was at the Tottenham FA cup game the other week when Dier jumped in the crowd, I didn’t know how to react. I got the chance to play the team dinner when they came through Nashville and me and Eric got on pretty weel during that and when I saw him coming up I kind of scooted over to make sure nothing happened, I don’t know!

When you plan European dates, are football fixtures high up the check list?
It’s not the first thing I check but I have some very dear friends who take very good care of us through this club .
​
Coming from America, how does supporting Tottenham come around?
I’m an underdog and most Americans like an underdog and the scrappy one. There’s been some American ties over the years with Spurs with a few goalies and Klinsmann was the national coach. I supported the Kansas City Royals and Chiefs close to me growing up and they didn’t have championships, so I guess that’s not something I need a team I follow! Maybe I’m a little hipster that way.