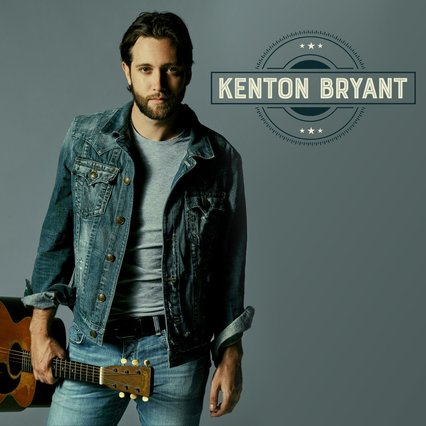 Kentucky native, Kenton Bryant, has released his self-titled six track EP. The debut EP sees the singer/songwriter claim writing or co-writing credits on every track. He has recently signed an exclusive song writing agreement with Big Machine Music, so be ready to see this name more over the coming months and years. Of this EP, Bryant has said “I wanted to give people a real idea of who I am and give somebody somewhere music to drink to, groove to, love someone to and miss someone to. I’m really looking forward to the ride and I can’t wait to bring everyone along with me.”

The EP opens with the track Since You’re Gone, which was co-written by Jonathan Singleton. Of the process of recording the album, Singleton said “I have loved helping Kenton get this EP where he wanted it to be. With his strong work ethic fueling the way he sings, performs and writes great songs, he makes it really easy and I’m just so proud of him.” We open with an up tempo, guitar riff post break up song, with Bryant trying to find himself and going over where things went wrong.

I recently saw a meme online saying how you never knew the last time you went to play as a child and then you went on a night out with a friend never knowing that it would be the last time either. Out On A Good One, instantly reminded me of that. The song, co-written by Shane Minor and Cole Taylor, is the song for living in the moment song and enjoying the night as if it were the last “if the morning never comes, it’s just you and me going out on a good one.” In our recent Quick Fire Five with Kenton, he told us his favourite song to perform live is the next one of the EP, Beer And A Bottle, as it was the first song that a crowd sang back to him, and upon listening to it I can see why and is one of the stand-out tracks of the album and would do well at radio. The song is for the unromantic out there who don’t know how to share true feelings. Instead of a soppy I love you track, Bryant compares all the things that show how well things go together – “bourbon in a glass, beer in a bottle, porch and a swing ... things like that just belong.” Don’t know if many people would get away with using these lines, but could be worth a try!

The tailgate, drinking song to forget your worries comes in the form of Get A Little Gone – “going to rise that buzz like a freight train” while Watered Down is the mutual ending of a relationship, using another interesting metaphor that hasn’t been used before now that the idea of being drunk on love has dried up.

Singleton has another co-writing credit on the final track, Anywhere But Gray. The line that will stick with you for this song is “girl I aint going anywhere but gray.” The song is all about growing old together and being with each other till your dying day “till this road runs out, till this ship goes down, and that long black Cadillac carries me away.”

Having been touring across North America extensively in recent months this EP is bound to only be the start of things for Bryant both as a song-writer and a singer in his own right. This fits right into the current market for country music and is sure to catch the attention of many fans of the varied genre. Kenton Bryant looks set to be the next artist to break Nashville and will be headlining his own shows (hopefully in the UK too) in no time at all.

Continue to scroll down to see our recent Quick Fire Five interview with Kenton.

1. Which track from the album do you most enjoy performing live?
Beer and a bottle was the first song a crowd ever sang back to me, there’s nothing like that feeling!

2. How has opening for the likes of Willie Nelson and Kip Moore allowed you to introduce yourself to fans?Country music fans across the board are the best! They’re always welcoming to people bringing them new music. I’ve been very blessed to have people give me a chance on all different stages, and let me make them friends and fans.

3. How satisfying is it to know you wrote or co-wrote every track on the album?
Ifeel like I’ve been very fortunate to discover my artistic voice by writing songs. My favorite artists were all writers, and carved out their own lane and voice with the music they created. That’s what I’m aspiring to do.

4. What venue will you never tire of playing as you now tour nationwide and hopefully worldwide soon?
The venue where people took time out of their day to come spend it with me will never get old. Big, small, loud, quiet, doesn’t matter. If people are there to support me, I will always be ecstatic to be there.

5. Following the albums release, what is top of your country music bucket list of things you want to achieve?
I want to make more fans and believers. We are all in this together, and it takes those for me to keep building this thing. I would love to play the Ryman. It’s the first place I saw a show, and it would be full-circle to get the opportunity to grace that stage and sing.