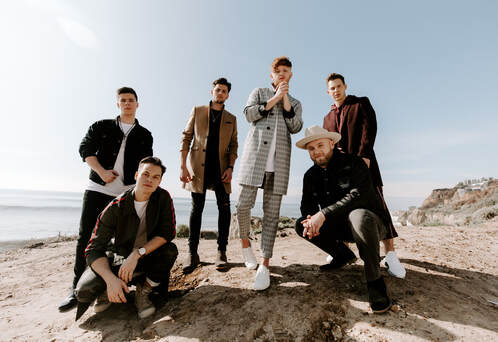 With their debut album, Rivers, set to be released just a week before this years festival (6th March), Nashville 6-piece King Calaway will be making three appearances over the London weekend with slots on The Big Entrance, Town Square and Radio 2 stages. We caught up with Chad Michael Jarvis to see what we can expect from them at C2C.

1. What can the C2C crowd expect from a King Calaway set?
They can definitely expect a lot of onstage energy from all of us, but especially Jordan. We’ll be performing songs from our debut album “Rivers,” as well as some fun covers that we like to throw in. Most importantly, we want to make sure the crowd is feeling good and having loads of fun. Just like the album, we want to fill the set with as many positive vibes as possible, and just help people forget about their worries and troubles even for just a few minutes. That’s what music is all about.

2. What encouraged you to want to play at C2C and use it as your introduction to UK fans?
Given that two of the guys in the band are from the UK, we want to make sure we make it out there as often as possible. We played in Simon’s hometown for Gibraltar Calling and hope to make it to Jordan’s hometown of Edinburgh soon. We adore visiting the UK and each trip is packed full of amazing memories and experiences. We hope C2C can introduce us to so many more amazing listeners and fans in the UK, as well as unite the ones we have already.

3. What is your favourite song to play live?
Each of us have different ones, but the one we all look forward to playing at every show is “Rivers.” It’s packed full of energy and it's incredibly fun to play, especially when we get the crowd involved and singing the chorus lyrics back to us. We all have a special connection with those lyrics because they remind us why we love what we do and how fortunate we are to have found each other and create this special project that is King Calaway. Also, Caleb’s guitar part gives us life every time.

4. What sights do you hope to see while in London?
We’ve been so fortunate to see so many sights every time we’ve been in London, from Tower Bridge to Buckingham Palace. We always make an effort to walk around or take the tube to see even more of the city.  A dream for all of us is to one day record at Abbey Road Studios, so we hope to make that happen one day. But I think a priority for all of us when we visit is a cheeky Nando’s.

5. What 2 top facts should we know about King Calaway?
​Out of the many interesting facts there are about King Calaway, I’d say the two most important are our love of FIFA and chicken. Most days, you will find us in one of our apartments or in the back of a tour bus playing FIFA, and by playing I mean myself losing to rest of the guys every game. Joined by an order of either chicken tenders, chicken sandwiches, chicken wings, etc. We live very exciting lives outside of music.

In America the band has been lauded by Rolling Stone for bringing an “exuberance to the stage…each taking solo parts between lushly harmonized chorus parts.” They have already had success most Nashville acts could dream of; Supporting Garth Brooks stadium tour, performing at the Grand Ole Opry , performing on The Jimmy Kimmel Show , Late Late Show With James Corden , and US primetime TV The Today Show, they were VIP guests
at Elton John’s book launch, had a Billboard in Times Square , and even appeared on Neighbours . Now, after stunning audiences at their debut European live at Gibraltar Calling alongside Take That, Tom Walker and Rick Astley and their debut UK show at London’s Gibson Show Rooms, King Calaway are being hotly tipped this side of the pond.

Before coming together in 2018, bandmates Caleb Miller, Chris Deaton, Simon Dumas, Jordan Harvey, Chad Michael Jervis and Austin Luther all pursued their own solo careers, racking up a long list of milestones —including CMA Awards performances, international tours, session gigs, and BBC TV appearances — along the way. They could all sing. They could all play. And one by one, they all found their way to Nashville, drawn to the
city by its rich, diverse music scene.

There’s no lead singer here. No singular star. Instead, Jordan, Chad and Simon all share frontman duties, backed by rich, multi-part harmonies from Chris, Caleb and Austin. The result is a layered vocal sound that nods to the band’s influences, including the Eagles, Keith Urban, and Ed Sheeran. And just like the Eagles, every member of King Calaway is also an adept, well-rounded musician, from the guitar-playing Caleb — who became a professional studio musician at 13 years old — to Austin, a highly trained bassist who toured the world with multiple acts before joining King Calaway. Simon first earned an audience at home in Gibraltar, with his expressive piano playing and pop-oriented songwriting, while Jordan — a Scottish multi-instrumentalist who
played drums before becoming one of King Calaway’s main vocalists — played packed shows in London, Edinburgh, and beyond. And then there’s Chad, a lifelong vocalist whose past includes theatre productions and cross-country gigs, as well as Chris, who played drums for performances on the CMA Awards with artists such as Steven Tyler and Jennifer Nettles before keeping time for King Calaway.