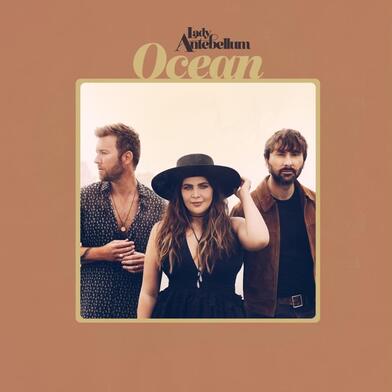 Lady Antebellum’s incredible up and coming eighth studio album, Ocean, is set to be released on Friday 15th November 2019 as their debut with Big Machine Label Group Records. The country trio stated that Ocean was one of their favourite albums to create as it allowed them to bear their souls and write a collection of truly honest songs that “felt like going home”.
The 13-track album opens with Ocean’s first single ‘What If I Never Get Over You’. Lady Antebellum introduced the track at this years C2C festival in March ahead of its release in May with an overwhelming response from the country crowd. The single is packed with emotion and is relatable to listeners as it focuses on a struggle to move on from a lost love. ‘What If I Never Get Over You’ is built on a familiar foundation of Lady Antebellum harmonies and powerful lyrics with a unique twist, making it this album’s ‘Need You Now’.
​
The already released ‘Pictures’ brings an upbeat and summer-sounding vibe to the album. The track focuses on the ever-changing nature of a relationship and this is mimicked in the track itself. The melody is characteristic of a happy summer song but the lyrics revolve around feelings of pain and how an outward image can be deceiving of how people really feel. The lyrics ‘we sure look happy in pictures, the camera doesn’t show the way it hurts’ tells the story of a picture perfect relationship with a happy outward appearance that masks the true feelings and pain on the inside.

The next track, ‘Crazy Love’, brings the listener back to the gentle love-song side of Lady Antebellum, using violins to add a soft and calming feel to the song. Charles and Hillary’s classic duet style and effortless harmonies are the main ingredient in this reflective love song and are matched with beautiful lyrics; ‘thank god for you, thank god for us, thank god for crazy love’. This idea of true love is reiterated later on in the album in ‘What I’m Leaving For’ and ‘On a Night Like This’. This track is dramatic and strong yet soft and moving, similar to the feelings associated with falling in love.

As well as allowing you to feel vulnerable with its moving love songs, the album also makes you want to dance and feel confident. This is definitely the case in ‘Boots’. The bass drum and guitar naturally give the track a different groove to the love songs on the album as well as causing an inevitable toe-tapping response when you hear it. The urge to move to the music builds further when a Celtic influenced violin piece is added, combining a variety of different styles of instruments to create a memorable song.

This album is a real step forward for the trio as they incorporate their distinctive sound with a variety of themes to create truly powerful music. There is a recurring theme of complicated love throughout the album, prominent in ‘Be Patient With My Love’ and ’Let It Be Love’ which encourages people to embrace love instead of negative emotions which can drag you down. There are also bluegrass elements sprinkled into various tracks in the album, primarily in ‘Alright’. This uplifting track, about that one person who makes everything better after a bad day, has a strong banjo element and a real bluegrass, country twang.

Another standout moment in Ocean is this album’s sassy track ‘You Can Do You’. Immediately making you move with its infectious rhythm, ‘You Can Do You’ is a confident and feel-good track that is all about feeling comfortable in your own skin and being yourself. The song is shaped by rock infused guitar riffs with a country twist and empowers its listeners to be unique.

Charles’ and Hillary’s vocals flow effortlessly together throughout the album, complimented perfectly by Dave’s background vocals and instrumental talent. In ‘The Thing That Wrecks You’, the trio are joined by the wonderful Little Big Town who are a perfect fit alongside Lady Antebellum. The track tells the classic story of a love that you can’t let go of even though it causes you pain, ‘I hate all the madness and the pain I put you through, it’s not your fault, it’s just how I am’. Compiled of perfect harmonies and smooth vocals that compliment the tempo and each other, this track is a combination of the best of both bands.
​
The album closes with its title track ‘Ocean’, which is easily one of the most moving and memorable songs in the tracklist. ‘Ocean’ pulls in the listener as it combines an emotional piano arrangement with a flawless vocal performance from Hillary. The lyrics are equally as effective throughout as it follows the similarities of the ocean and a relationship with someone who won’t let you in, ‘how can someone stand so damn close, and feel like they’re worlds away’, ‘you’re an ocean beautiful and blue’. The end of the track, and in turn the end of the album, is explosive as the guitar and strings kick in for the last verse of the chorus. This powerful sad song is the perfect ending to a great album and truly shows the effort and love that the trio poured into the album.

Excitement builds as everyone looks forward to hearing the album in full when it is released on the 15th November. Ocean is another successful album for Lady Antebellum and will steal their listeners hearts.