Lanco
​Live from the Town Square Stage @ Country to Country 2018 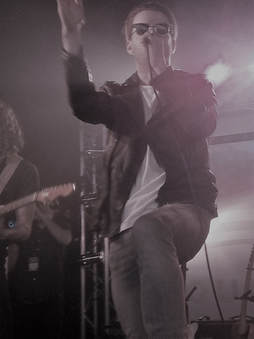 Just before the doors opened to the O2 Arena on Sunday night, the Town Square Stage was the place to be. Nashville natives, Lanco where set for their final appearance of the weekend.
Following the release of Hallelujah Nights in mid-January seeing Lanco perform was top of my who to see list over the Country to Country weekend and they didn’t disappoint. A little after 3:20 the intro music changed from the mellow country background to a mix of sirens and the band stepped onto the stage to play to 6 tracks from their album to a crowded tent. If Lanco’s aim was to get the crowd pumped for what was to come in the arena they managed that with ease. If people didn’t know who Lanco were before they headed to London this weekend they certainly do now. Starting their set of with Troublemaker, Long Live Tonight (their original single) and Pick You Up the crowd, young and old, sang along to every word and lead singer Brandon Lancaster wasn’t going to stop them.
As the set continued the crowd was joining in more and more. Lanco performed their next single, Born to Love You, before the audience was asked to split down the middle during Singing at the Stars while clapping at quick pace. A drum was placed at the front of the audience and Brandon proceeded to jump into the audience and keep the beat going from the middle of the tent. As he leapt back onto the stage it demonstrated how much fun Lanco had had over the C2C weekend and just how much their fans meant to them. As the band closed their set with the single that launched them to the world, Greatest Love Story, you could have felt like you were inside the O2 Arena, not a tent that had been put up by the exit to North Greenwich tube station.
This final performance from Lanco was one that I am glad I witnessed as well as having had the opportunity to see them at such an intimate stage as I’m sure the next time the band play in the UK it definitely won’t be in a pop up tent.
​