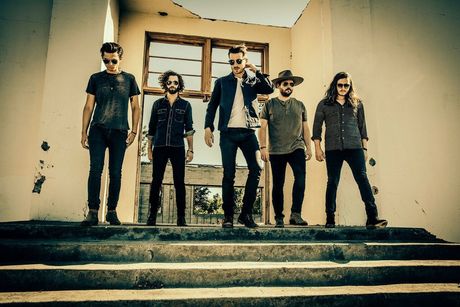 If you like your storytelling country music tracks the debut album from one of Nashville’s hottest new act, Lanco, could be the album to get you through the last of the cold nights. Despite being founded in 2013 and releasing a four track EP in April 2016 you had probably never even heard of them until just a few months ago with the slow and steady climb up the charts of the platinum selling second single from this album, Greatest Love Story. Despite its release in March 2017 and being featured in the closing scenes of an episode of Netflix’s The Ranch, it only reached number one on the Country Airplay chart at the start of December and you can’t listen to a country station without hearing it.
All eleven tracks on the debut album have writing credits for frontman Brandon Lancaster and come across to the listener as relatable, real life experiences of a group of guys who grew up in small town southern USA.
The album opens with the band’s latest single, Born To Love You. The upbeat song draws in the listener and gives a sense of what is to come with the first love song themed track about being certain you’ve found the one for you. Long-time fans of the band will be aware the second track, Long Live Tonight, was their first single back in 2016. Despite only reaching a high of number 32 in the country airplay chart it offers the listener a greater idea about what to expect from Lancaster’s writing with the request to not being scared and making sure you live for the moment as you can look back on them when you are old and have no regrets. Pick You Up looks to rekindle an old romance while smash hit Greatest Love Song is the story of the high school sweetheart who went away to college until she returns four years later and you get the chance to get down on one knee. If you didn’t know that though, where have you been the past few months? The only question unanswered is did she say yes?
The album continues to demonstrate how you should appreciate the finer things in life with We Do before the heartbreak song about the girl all the guys want, Trouble Maker. Small town roots is clear to see in Singin’ At The Stars, it doesn’t matter if you can afford an all singing all dancing date night as there is nothing wrong with lying on the car bonnet singing your favourite songs from the radio.
The real-life experiences continue with Win You Over, the first date song and having just once chance to win someone over as you never know where it could lead to. On the other side of this song, So Long (I Do) is the song of what happens when maybe that first date doesn’t go so well and you don’t win her over!
As the album draws to its close the boot stomping, sing and chant along country track makes an appearance for Middle OfThe Night with a tribute to the unplanned, simple night which always turn out to be the best nights and it doesn’t matter where you end up.
The album closes with the title track, Hallelujah Nights, where Lancaster offers a final reminder that it’s all about living for the moment as time goes to fast.
Having finished 2017 on a high with Greatest Love Story it looks like 2018 is going to be a big year for Lanco. The album is being released on Friday 19th January and is available in the UK on CD and digital downloads. Despite no official announcement from the organisers of Country to Country, the bands official website does show them as performing at the O2 for the entirety of the weekend and on the basis of this album and their potential in country music look set to be an act not to be missed.

Aside from the obvious one, my three must listen to tracks from this album are:
Middle of the night
Long Live Tonight
Win You Over

With the buzz still high from Greatest Love Song I can see this album going to the top of the charts and the C2C crowd is sure to be singing along in March to every word of this honest and down to earth album and not one track gets lost in the album.