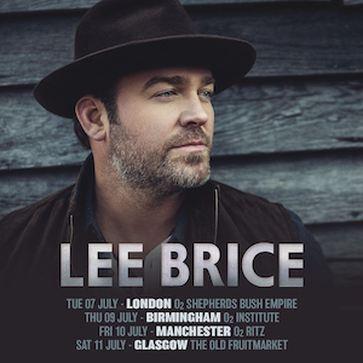 Tickets are now on sale for award-winning, double Platinum US singer/songwriter Lee Brice's major UK headline tour for Summer 2020 including a date at London’s O2 Shepherd's Bush Empire, and dates in Birmingham, Glasgow and Manchester.
With more than 14 million in RIAA certified sales, Brice has achieved Gold and Platinum on every album and single he’s released. Achieving over 2 billion spins on Pandora, Brice was inducted into the streaming service’s “Billionaires Club” on June 8, 2018. The “Rumor” singer, who is now among the Top 25 most-streamed country artists of all time on Pandora, is only the second country artist behind Keith Urban to receive Pandora Billionaire plaque and puts Brice in company with not only Urban, but legends including Johnny Cash and Fleetwood Mac.

Lee is a GRAMMY nominee, a CMA nominee and a double ACM award winner, and he's taken five radio singles to #1: “A Woman Like You," “Hard To Love," “I Drive Your Truck," “I Don’t Dance," and “Drinking Class.” Currently his duet with Carly Pearce, “I Hope You’re Happy Now”, is in the Top 30 on the charts and climbing.
​
Tickets are on-sale now: www.gigsandtours.com / www.ticketmaster.co.uk