The Long Road Sit Down with Lindsay Ell

On Sunday afternoon at this years The Long Road Festival, the energy and positivity of an artist that has consistently been more committed than any other artist to work the UK and European market finally after nine years, got to flourish in a full band stage show on this side of the Atlantic.

Lindsay Ell, when she hasn’t been hosting Canada’s Got Talent or rocking every festival stage across North America has been working on new music to follow up her very personal “heart theory” which was released during the pandemic. Despite a pair of video catchups over the last three years, we finally got her back in the UK and Jamie spent some time catching up with her during the festival.

I am so happy to see you because it’s been so long. Zoom is magical and everything but it’s not the same.
“It is not and it’s so good to see you! You look amazing, are you having fun?”
​
I’m having loads of fun! I love the hoops by the way, you look way more amazing than I do! We spoke last time how this would be the first time I would have got to see you play with a full band which is so crazy as I’ve known you and seen you live for ever and ever and ever, but it was awesome. I really love the new track that I hadn’t heard before and that real funky vibe so tell us a bit more about that.
“That is called “Every Time I Look At You” and I’ve always been such a Cory Wong fan, he’s the guitar player from Vulfpeck and he is so good, he’s like a funk guitar player and we just became friends over the pandemic. He was coming in and out of Nashville so we just wrote a bunch of songs and we fell in love with this one song so he put it on his record, and it’s been so fun to be able to collab with artists that I never even thought I would collab with. I’ve looked up to Cory and his music for so long. The fact that throughout the pandemic it brought artists together who wouldn’t have normally collaborated with each other, even my collab with Cheat Codes and Lee Brice probably never would have happened without a pandemic so that’s like the silver lining from the last couple of years.”
​
The kind of big one I guess since we last spoke is have you got any news that you can tell us on LE3? Where abouts are we? Are we still heavily writing, are you recording it yet or have we got towards post-production?
“We’re kind of writing and recording both at the same time. After “heart theory” I took some time to figure out what I wanted this album to be, but I think until you really finish an album you never really know what it is. You’re moulding the clay and you don’t really figure out what it comes out to be until you’re done with it. I’m right in the midst of it right now but I’m in the sweet spot and I feel so good about this new music. Obviously “Right On Time” is scratching the surface of LE3 but we will have some new music out this fall and the album to come next year.”

You mentioned “Right On Time” which you kicked off your set with, which is a very poignant song and a song I really relate to, a lot of my friends do too. We’re in our thirties, we get those voices at parties and family dinners saying what you should be doing.
“Yes! At family dinners it’s so crazy, your friends and your family are so supportive, and they love you but it’s crazy how much pressure you feel from them. Sometimes you don’t even notice it, like it’s going on in your subconscious so much that you don’t even really notice that you are feeling so much pressure from your own family. It’s a huge one, that they love you and just want the best for you and it’s all from good intentions but pressure none the less. For sure, being in my thirties I’m with you. It’s this time where it’s “well Lindsay, all of your friends are getting married, having babies and doing their thing” where I’m out here on the road however many days a year and I’m like am I doing this wrong? Did I miss the memo on how we’re supposed to shape out your life?”

“I just really wanted to write a song that reminded people that it’s OK, your writing your own story and your own trajectory. Your friends and family are on their own, people that you see on social media are on their own path. Society and like societal pressures but everybody is writing their own story and it’s OK because yours is not supposed to look like your neighbours or that stranger over there. I think that it’s a really valuable lesson for me to remind myself let alone sing it on stage every night to be like you were right on time for where you are supposed to be in your life, and you can never be late to your own party you know!”

I loved your little mashup cover in your set doing No Doubt into Queen, please just always play that whenever you can! Well, I’m not sure how it would go when it’s just you and your pedals, but it sounded awesome!”
“I knew it was pretty ballsy to cover “Bohemian Rhapsody” and I love No Doubt so much. Gwen has just inspired me so much, even being on the road with Blake Shelton has just been such an amazing gift. Getting to meet Gwen and be around her has just been so cool, talk about being a style icon and my pop punk icon. It’s been so fun to throw some No Doubt into our set and see how much people respond to that, so it’s been really cool.”
​
From here, you are on the road with The Cadillac Three who are going to close out tonight and something I didn’t know about the tour until today is that you’ve got a drummer with you and you have this whole The White Stripes vibe going on.
“Totally. When I saw that we were going to be touring with The Cadillac Three, I love those boys so much and they’ve been so supportive of me and my career, we’ve always wanted to tour together but it was just finding the right time and place. I’m so grateful that we are able to tour with them over here because their fans are rabid over here and so cool. It’s been amazing to be able to bring some of my fans to the show and meet their fans, but I knew I needed to put together a bit more of a rockier set so yeah, we’re doing total White Stripes vibe with me and a drummer. It’s been a lot of fun, I just turn my amp up really loud, and we just go to town.” 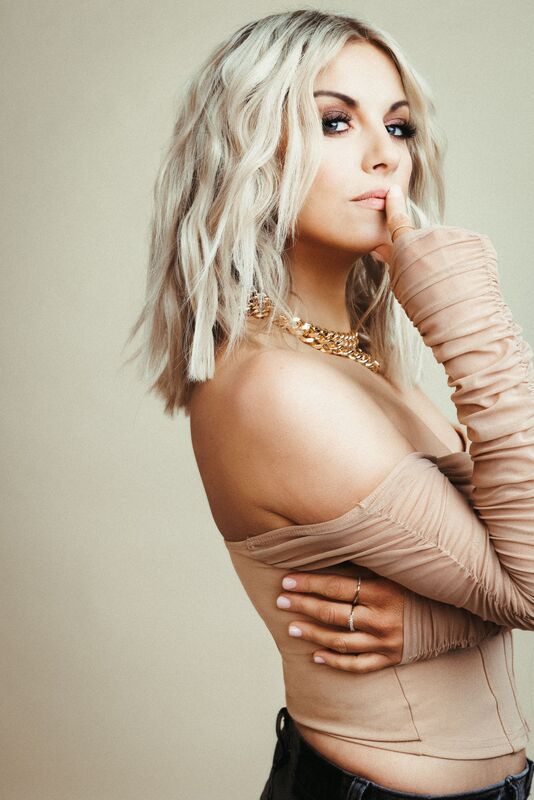 Someone else you got to open up for recently was Shania where Oh My God girl you looked amazing in your animal print jump suit but that must have been incredible?
“Thank you. Well, you’ve got to pull out all the stops for Shania, be wearing animal print of some kind and do incredible glam. If you were to tell ten-year old little Lindsay that she was going to open for Shania Twain, she would have thought you were crazy. Shania is just so cool, I’ve gotten to get to know her, and you always hear that thing people say of never meet your idols because you never know what their going to be like, but she is completely the exception to that rule. Not only do I look up to her for just breaking through a genre and reinventing country music when she hit the scene in the nineties but also as a female artist, she knows how to say what she means with intention that is sexy and feminine at the same time. As a female that is such a hard line to walk and still be true to your artistic self, she just does it so effortlessly and she’s just the coolest person, she’s so down to earth and so amazing. After the festival that we played with her, like fifty thousand people screaming at the top of their lungs, I’m opening for Shania then I got to hang with her a little bit after the show and she brought me a piece of strawberry cake. She was like her Lindsay, do you want a piece of cake? Yes Shania, I do want to eat cake with you any day of the week but she’s the coolest and I love her so much.”

I feel even worse now that I didn’t bring you any nice treats this time.
“Whatever! No, we are in the middle of the country, we are like camping it out up here. We will do treats again next time.”

I laughed so much because I absolutely loved the first thing that you posted when you were in London the other day was a total show everyone you are Lindsay Ell without saying you are Lindsay Ell. You’re walking down the street with your guitars on your back and it’s like what’s she got in this hand? Oh, you’ve been to Ladurée.
“Ha ha, of course. I know my priorities when I’m in London for all of five hours, so what else would I do?”
As we’re both getting distracted by all of the cute dogs we keep seeing, are you missing Hendrix a lot being overseas?
“This is the longest time that I’ve left her. It’s so crazy, I don’t have any kids, but I get to scratch the surface of what it feels like to leave your kids and I miss her so much. She is staying with some friends of ours and I’m like an Instagram crazy person that is always looking for updates or if she’s in a story. She comes on the bus all the time and she’s a great road dog but it’s a little bit too long of a flight to come across the pond. Maybe one day she will venture over this way.”
​
Amazing, thank you so much and have so much fun on the rest of the trip.
“My pleasure. It is so good to see you, it makes me so happy.” 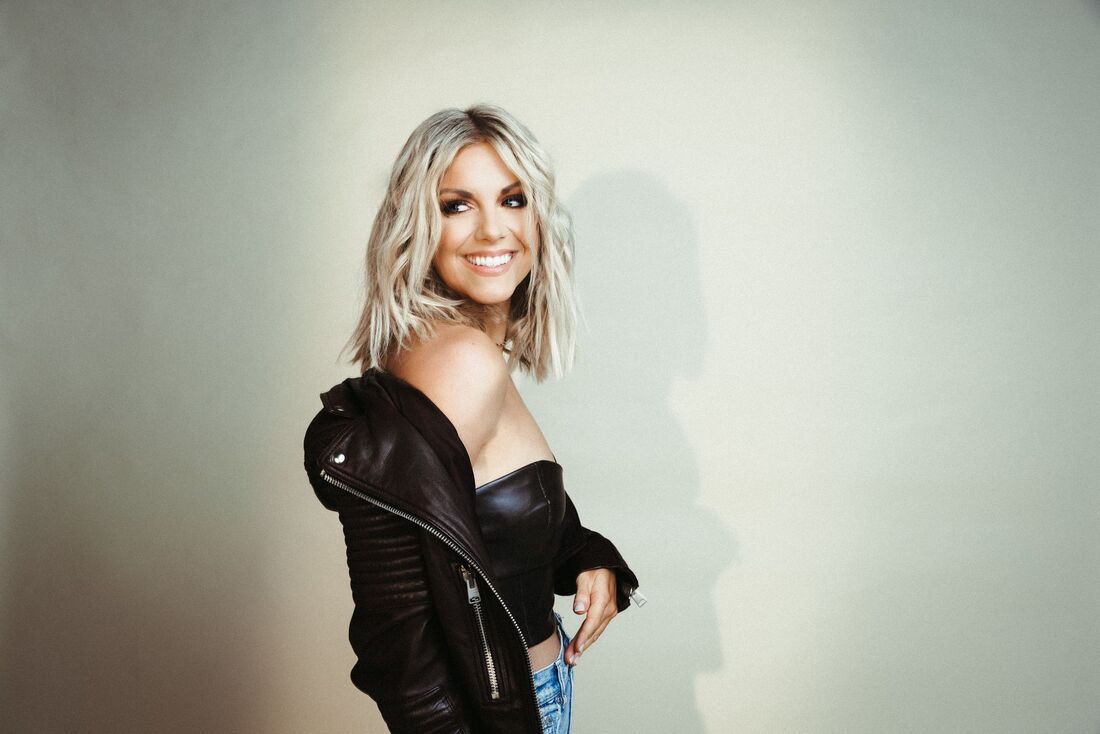 ​The new single “Right On Time” from Lindsay Ell is out now through BMG/Stoney Creek records and available HERE.

​She is currently in the UK with The Cadillac Three on their Hillbilly Hypnotized Tour which wraps up in London at The Roundhouse on Tuesday September 6th. Ticket information and full dates can be found on her WEBSITE.