- Did you have a musical mentor? If so, who was it and how did they influence you?
Yes, I’m very lucky that my dad, Randy Sharp was my mentor.  He’s also a writer/artist/producer and was always enthusiastic about sharing what he’d learned along the way.  He showed me around the recording process (analog and digital) and he was my first co-writer.  He never pushed me though, he always waited for me to come to him and when I did, there was and still is a wealth of knowledge there.  Like I said, I’m very lucky.

- What was the “a-ha” moment when you knew the song was completed and perfect?
- “Perfect” is a dangerous word but I definitely had that “ah, there it is” moment with “Always Good to See You.”  I wrote this for a cool podcast called SongWriter where an author reads a short piece and a songwriter writes a song in response.  My author was Cheryl Strayed (love her) and her piece was about all the ways her mom, who died when Cheryl was in her 20s, still shows up in her life in countless and unexpected ways.  I had written the concept of the chorus but I needed a sock-in-the-gut last line.  I did a lot of digging for it but when I finally dug up “It’s always good to see you” I knew I had it.

- What has been your biggest struggle so far?
Managing expectations.  Just because I got a good opportunity and it went well doesn’t automatically mean things are going to change that much in my general career.  Sometimes those things just come and go and you grow from them.

- What has been your biggest success?
I’ve tried to keep the balance of being an artist and writing for other artists going since the beginning so, as an artist the experience of making an album (Echo) with Don Was.  As a writer, hearing Bonnie Raitt sing 3 of my songs then the ride that led to (recording and touring with her).  Overall, my biggest success is that I keep going even when it’s tough and that each new album is my favorite.  I’m really proud of Mercy Rising and of myself for slogging through so much personal stuff to get it out.

- What’s the best advice you have ever gotten from another musician?
It wasn’t direct advice, it was what I learned watching Bonnie Raitt from the wings night after night (I got to open a couple months worth of shows for her).  The way she talks to the audience like we’re all just friends in our giant living room is so endearing but it never kept her from being a total bad ass.  I try to do that in my shows although my “living rooms” aren’t as big as hers.
- Do you have any touring tips?
Plan.  Then double check your plan.  Being out there is so much more fun when you know exactly where you’re going, where parking is for that place, check in, check out, load in, soundcheck, backstage, nearby food…everything you’ll need that day.  If those questions are all answered before you roll up, you can just focus on being the artist.

-What’s your dream venue and why?
The Greek Theater in Los Angeles.  It’s where I saw my first live concert with a friend (not as a kid with my family).  It was Men at Work and every time I’ve been to the Greek after that I think about what it would be like to play there.

- Song (of yours) you wish you would have released as a single and why?
“The Middle” from my album Change the Ending.  I feel like my co-writer Lindsey Ray and I really locked in the lyric and overall vibe.  I wish it got more attention.
- Who would you love to collaborate with?
Phoebe Bridgers 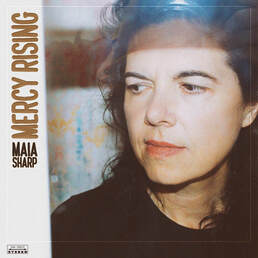 Maia Sharp is an American singer and songwriter. Known for her solo work, Sharp is also a well established songwriter, with songs recorded by the likes of Cher, Trisha Yearwood, Terri Clark, Bonnie Raitt, Edwin McCain, and Art Garfunkel.
Now, with a new album set to be released, Mercy Rising, is her boldest yet most confessional offering to date.  After living in the Los Angeles metro area for most of her life, Maia moved to Nashville at the beginning of 2019, partly to be in an unapologetically songwriter centric town and partly as a personal life reboot.  Soon after arriving and settling in to her new Nashville digs, Maia started recording Mercy Rising at Resistor Studio, owned and operated by her friend Joshua Grange, an accomplished all-around musician and engineer currently playing with Sheryl Crow and Lucinda Williams.  They tracked drums (Ross McReynolds), bass (Will Honaker) and electric guitars (Josh) there to get that real-humans-playing-music together energy and make the most of a sonically beautiful room full of great players.  Sharp, then brought those tracks back to her home studio where she performed and engineered acoustic guitars, piano, Wurlitzer and vocals making sure to get friends and co-writers Mindy Smith, Peter Groenwald, PJ Pacifico, Anna Schulze, Thomas Finchum, Cyd Greenwood and Gabe Dixon in to sing and/or play on the album as well.

Mercy Rising is set to be released May 7th 2021... Find out more via the following LINK ​