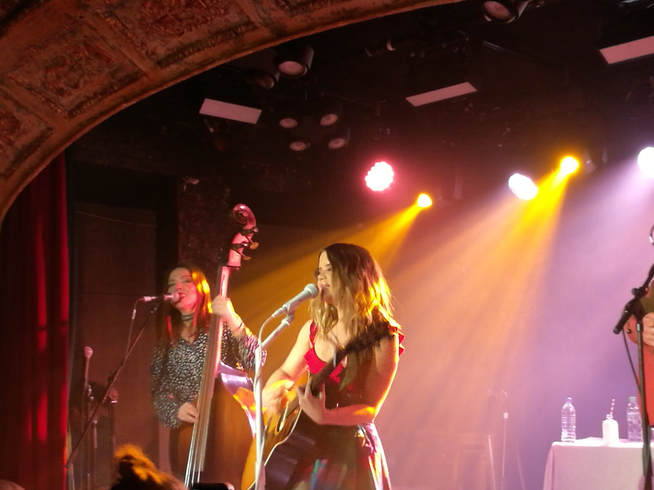 Maren Morris made her long awaited return to British soil tonight, 26th Nov, for one night only. Tickets to the London show, at O'Meara, sold out in just a matter of minutes. The lucky few that had got their hands on this week's country concert golden ticket were in for an acoustic set from Maren they will probably never get to witness again. With the queue snaking around the outside of the building, the November chill was not putting people off getting to the London Bridge venue early to get the best possible view.

The evening was opened by Irish native Catherine McGrath who took to the stage, in front of a full house, to perform a selection of songs from her debut album. Her rise in recent months was clear with so many of those in attendance knowing every word to every song. The advantage of such an intimate venue (and the scarcity of tickets) meant everyone came to listen.

As Maren entered the stage, she immediately demonstrated that you don't need to bring a full band on tour with you to put on a show. On the stage was just Maren with her guitar, a double bass and another guitar. Complete back to basics.
​
Opening her set with Drunk Girls Don't Cry, she was able to use her vocal prowess to wow the few hundred people in the crowd and she wouldn't loose their focus for the remainder of the night.

The evening would prove to be one of storytelling and letting fans in on some of the unknown features behind the tracks and her rise to fame in Nashville. Performing all the fan favourites including Rich and I Wish I Was, Maren introduced the song which she had originally penned for Kelly Clarkson - although she couldn't resist putting Second Wind on the Hero album. Bummin’ Cigarettes was to follow before her husband, Ryan Hurd, joined her on stage for a track they wrote together - Last Turn Home - which was recorded by Tim McGraw just a few days after it being written.

Next, Maren was to turn to a song her and Ryan wrote with Brothers Osborne, which appeared on their debut Pawn Shop album, Greener Pastures before introducing the crowd to the first song she performed on the guitar, John Pine's Angel From Montgomery.

The Route 91 Harvest Festival will always have a place close to Maren's heart, having performed the day before the 2017 shootings. At a loss for words following the events, Maren immediately released Dear Hate. As she sang the song tonight, the mobile phones which were prominent all night with people taking pictures and filming went into the pockets and she had the complete attention of every person in the audience - it really is a rare moment in 2018 and shows what an impact a song can have on an audience.

To pick up the spirits, the tale behind 80s Mercedes was introduced - a girl not wanting to be with a guy anymore but she really liked his 80s Mercedes! With new music on the horizon, To Hell and Back gave the crowd an insight of what to expect from an album that Maren has claimed will be very diverse. To close out the evening, Maren went for the ballad I Could Use A Love Song and her most recent release The Middle. There was no surprise for the final track, a full on sing-a-long to the track that will have introduced Maren to most of her fans, My Church.

The fans that were quick to snap up the tickets will certainly remember this. Having announced she will be back in 2019 - sooner rather than later - fans will be waiting for dates to be announced. She also gave away a venue on her next tour - The Royal Albert Hall.

We are very lucky in the UK that we get to see artists like Maren at these intimate venues and now we just need to pack the Albert Hall next year.

Set List:
Drunk girls don't cry
Rich
I Wish I Was
Second Wind
Bummin' Cigarettes
Last Turn Home - with Ryan Hurd
Greener Pastures
Angel From Montgomery
Dear Hate
80's Mercedes
To Hell and Back
I Could Use A Love Song
The Middle
My Church