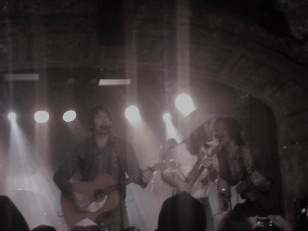 Country to Country may have concluded on Sunday night, however one of the main stage acts wasn’t ready to end the country party. Texas natives, Midland, headed to Omeara in London for the final show of their European tour. Having been nominated for two Grammies this year, interest in the band has been building with their debut album, On The Rocks having sold close to 60,000 copies and it was no surprise when tickets to this intimate gig of around just 300 people sold out within minutes.

As Midland entered the stage, on which lead singer Mark Wystrach was able to touch the ceiling, it was clear this was an environment they thrived in and came across as three guys who enjoyed every second of this whirlwind rise to the top they have found themselves in.

The party atmosphere just kept going as the band went through a selection of tracks from their album and as ever the UK fans were singing along to every word. The night featured covers of Alabama and Springsteen tracks, however the biggest laugh of the night came when Wystrach went to start singing the track Altitude Adjustment. The intro finished and as Wystrach stepped up to the mic the pints of Whisky and RedBull may have got to him as he forgot the opening line to the track – this was saved by the Wystrach reassuring the crowd that at least they knew they were playing live!

After nearly 80 minutes on stage the band broke into their hit record Drinkin’ Problem, which had peaked at number 4 on the country charts on its release. As the song came to a close the crowd was ready to head for their trains home, unfortunately for those in a rush Wystrach had other plans. Instead of finishing there, Midland continued to the excitement of the crowd for another four songs. As there cover of Bob Segers, Turn The Page, came to an end Wystrach took it upon himself to personally thank as many members of the audience as possible on route to the bar at the back of the venue to start having shots!

As if close to two hours of an energetic show wasn’t enough the rest of the band joined him in the crowd to sign set lists, vinyl’s and even cowboys whilst happily posing for selfies. Having been fortunate to see many of Nashville’s finest perform in these intimate London venues this is certainly an ending to a night I will never forget.
​
If you missed the gig at Omeara last night, don’t worry as the trio have already confirmed a headline UK tour at the end of October this year with tickets going on sale this week. Although the venues confirmed are substantially larger than Omeara I can see many of these shows selling out quickly – so be quick as you won’t be disappointed.
​