Mitchell Tenpenny - Telling All My Secrets 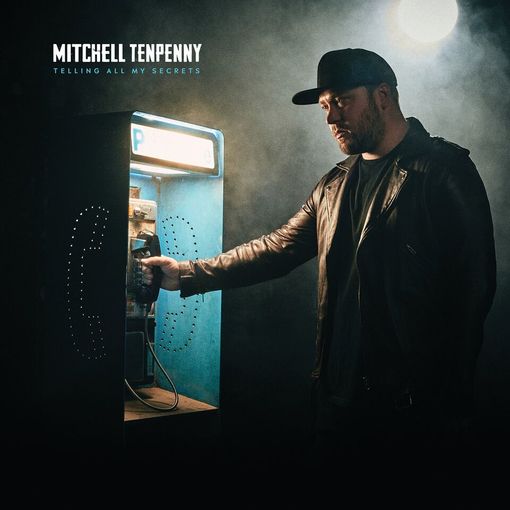 When you are born and raised in the city of Nashville there are going to be many expectations that you would grow up to be a country music artist. For Nashville native, Mitchell Tenpenny he is on course to achieve just that with the release of his debut full length album – Telling All My Secrets.
“Growing up in Nashville around the music industry and seeing so many friends reach these milestones: getting a record deal, releasing their first single, setting a release date for the full album, they’re all things I hoped for and now that they’re all happening, I’m really just trying to live in the moment.”

Writing songs for this album proved to be pretty straight forward for Tenpenny, who has writing credits on all 11 tracks. Choosing those 11 tracks though proved to be the hardest part of all. In preparation for the album’s release, Tenpenny penned a total of 200 songs intended for the album before presenting 56 tracks for consideration on, to finally narrow it down to the final listing!

Back in February, Tenpenny released a 5-track EP, with four of those songs making the cut for the full-length album. The first of which, Truck I Drove in High School is also the opening track for this one. The track is written by a familiar name to UK fans, in the form of Devin Dawson. An upbeat reminiscing track about simpler days when the world was your oyster as you get behind the wheel for the first time, even though the chances are it was some banged up rusty old car which is still doing the rounds for a new driver today - It was love at first drive, I owned that road.

In January, the fan favourite track Alcohol You Later will be Tenpenny’s second single released to radio. This is the relationship that never seems to end and each time you go for a drink or meet up you stay together – I know when we’re sober we’ll both say it’s over. The first of the new track, All On You, is the moving on in life track and leaving your past love behind, whilst blaming them!

Goner, tells the tale of falling for someone and knowing straight away they are all you want – so good it hurts, one look at her and I’m a goner. The album continues with Chance Worth Taking and I Get The Picture before returning to his debut EP with Bitches, where Tenpenny is not giving up on love, instead just enjoying being single and focusing on himself and work.

In September, Tenpenny moved into the top 20 with his debut single, Drunk Me, by the end of the month it was in the top 15 and averaging 3 million streams a week. Based on those figures, it didn’t surprise many when earlier this month, with over 120 million streams, it moved to the top spot on the radio airplay charts. Despite the success of the track, Tenpenny didn’t originally have it planned as a song for himself and only recorded it after pitching it to other artists in Nashville for six months. “I believed in my heart it was such a special song and that it would be a hit for someone. I never dreamt it would be the song labels first heard from me, resulting in a record deal ... or that it would go on to bring us our first single, yet alone a number one.” The ballad is the break up song that forces you to stop drinking as being drunk doesn’t make a difference to your attempts to move on.

We continue with you waking up next to the one you love in Somebody’s Got Me before struggling to move on from an ex in Somebody Ain’t You. The title track, Telling All My Secrets, shows Tenpenny feeling comfortable enough with a love to tell them all his secrets.

Just prior to the album’s release, Tenpenny continued the build up with the release of Walk Like Him. After losing his father to cancer four year ago many people told Tenpenny that he reminded them of his father, Mitch. The song, my favourite from the album, describes all the traits that Tenpenny has that are similar to his dads and how he continues to follow the advice his dad left him with - Mama says I walk like him, Feet at 10 and 2.

From this debut effort, Tenpenny is certainly making himself known around Nashville and will have a lot to reflect on from a whirlwind year. He has opened himself up to allow fans to see an honest portrait of himself and will continue to find more and more fans following this release. The album will sit well amongst many of the recent releases coming out of Nashville with the usually mix of falling in love, breaking up and having a drink style of tracks which are becoming the norm for an artist’s debut effort without taking too many risks in the track choices.
​
With dates penned across North America to support the album’s release over the next few months, as well as joining Old Dominion on tour, we can have our fingers crossed there will be a trip to Europe in 2019 as it looks set to be another big year for him as he is only going from strength to strength. With his second single already being announced I can only hope Walk Like Him will be released as the third single as can easily impact radio in the same way as Cole Swindell and Scotty McCreery did with their own introspective tracks.

After listening to the album, we had so much to ask Mitchell. Just like he did with over 50 songs, we narrowed our questions down to five.

2. Aside from tracks from the EP, what one song did you know you had to include in the album?
Walk Like Him

3. How would you describe the album to a new listener?
I would say it’s honest and diverse. Country, Pop, Rock Soul a little something for everybody

4. What reaction did you get from your label when you told them you had over 50 track ideas for the album?
They were just happy we had enough material to choose from and make a record

5. With plenty of North American tour dates and festivals already penned for 2019, what else can we expect? Any international dates?
Yes we plan to go overseas as soon as possible! We are looking into every option as we speak!


We look forward to see what 2019 brings for Mitchell.