Nashville Meets London (NML) has announced the first round of performers set to appear during this year’s Nashville Meets London Music Festival. The dynamic lineup includes Priscilla Block, Shy Carter, Manny Blu, and Kyle Daniel, with more to be announced. DJ Hish will also perform in between sets, while Absolute Radio Country host, Matt Spracklen, will compère the event.

The NML Music Festival will be held on August 24 and 25, 2022, in a new location, Trinity Buoy Wharf, East London.  The new site is a stunning and cool new riverside venue opposite the O2 with an indoor stage and an outdoor seated area with food stalls and cashless bars.  The festival will feature performances by 12 artists, with six sets scheduled for each day.  Performances will be held between 4-11 p.m. on both days.   ​ 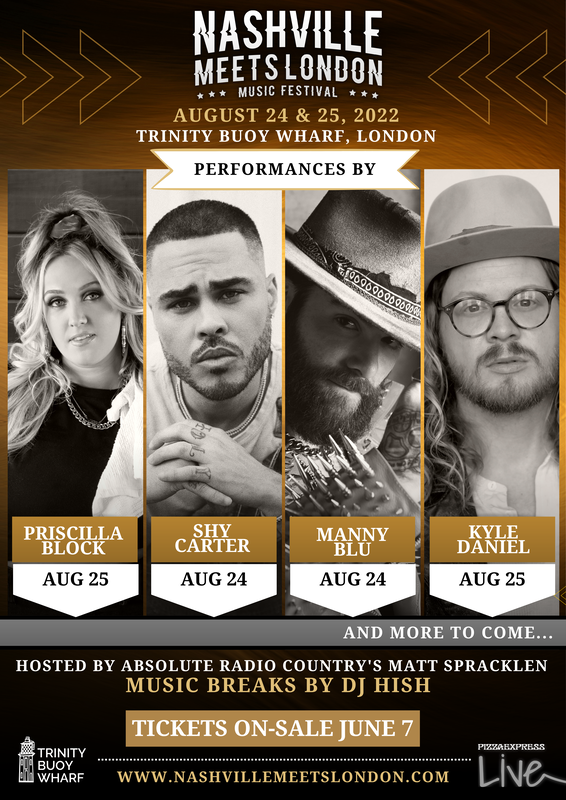 This year’s event will have a limited capacity; therefore, anyone that wants to attend is encouraged to buy tickets early.  Early Bird tickets for the event are £30 per person (plus the booking fee) for each day. Tickets will be available for purchase starting June 7, 2022, through the Pizza Express Box Office.  Ticketing packages that provide additional perks, including access to a private/VIP space with a private bar, access to special events, and early event entry will also be available. More information on tickets and event packages providing enhanced experiences will be released in the coming days.

In its seventh year, the NML Music Festival has become a summer staple for Country and Americana music fans. Festival performances will be held indoors at Trinity Buoy Wharf’s event space and will feature artists representing the U.S. and the U.K.

Trinity Buoy Wharf is nestled between Royal Victoria Dock, Canning Town, and Poplar, not far from Canary Wharf, and is an enclave for arts and cultural activities. Located along England's longest-running river, River Thames, the area represents the charm, character, and space of a former buoy manufacturing site in an exclusive riverside location. Trinity Buoy Wharf has kept its unique allure as a center for studio and gallery space, a pier, boat club, school, rehearsal rooms, three enormous sustainable and colorful Container City buildings, and dining options, such as The Orchard.

Event attendees can travel to Trinity Buoy Wharf by catching the Jubilee Line or DLR to Canning Town station, then take a 10-minute walk to the venue. Other options include DLR to East India station, followed by a 10-minute walk, Number 277 bus, alighting at the Town Hall on the north side of East India (DLR) station, or the D3 bus to Orchard Place. Parking on-site is not available.


Throughout the festival, fans will have options, including listening to music or retreating to the venue's terrace to enjoy the surrounding outdoor seating areas nestled among artistic backdrops and expansive river views. Food trucks and fully staffed bars will also be on-site, offering diverse food and drink options.

Developer of Trinity Buoy Wharf, Eric Reynolds adds, “We warmly welcome the artists from Nashville. The festival on the 24th and 25th of August will herald a new music venue on the banks of the Thames.”

Unlike past years when the two-day music event was held on Saturday and Sunday, NML 22 will be held during the evenings on Wednesday and Thursday night due to the venue's availability and the event organizer's effort to not interfere with other surrounding events.

NML Co-Founder Peter Conway comments, “The last few years have been challenging for artists, promoters, and audiences alike, and 2022 still presents challenges for promoters. This year’s festival started to become a reality when Gavin Chittick (Millport Festival) asked us to promote three U.S. acts that wanted a London show. Other agents and artists then contacted us. And by luck, Eric Reynolds of Trinity Buoy Wharf stated he had two free dates available midweek in August. For us, 2022 is a stepping stone to a larger festival in 2023. Watch this space! Conway continues, “We are so excited to be able to promote our NML festival in 2022. We started the festival in 2016 after I met with Nashville’s Jeff Walker in 2015. Jeff was a true torchbearer for widening the reach of country music, particularly up and coming and emerging artists. His spirit lives on in NML.”

Matt Watkins, NML Co-Founder, adds “NML 2022 is a new launching point for our festival, and we are excited for the future and the forthcoming events and talent we have yet to announce. We are always listening to what our UK audience wants while also pushing their music horizons with our talent lineup. Since its inception, our goal has been to bring over acts that fall in different areas of artists’ careers. Ultimately, we just want everybody to have a great time and hear great music.”

On August 19, NML will host the NML Country Music River Cruise just days before the festival, with support from PizzaExpress Live! The NML River Cruise will feature acoustic performances by several soon-to-be-announced artists, a set by DJ Hish, and hosting by Absolute Radio Country presenter Matt Spracklen. Tickets to this exclusive event are extremely limited and will be available for £45 per person. Limited VIP table packages for eight people are also available at £560. Tickets can be purchased at https://www.pizzaexpresslive.com. The boat will embark at Bankside Pier at 19.00 and depart at 19:30. Live performances will kick off at 20:00, with DJ Hish kicking off his set at 21:00. The boat disembarks at 23:15.

Leading up to the summertime festivities, NML Presents! monthly residency shows will take place on June 29, and July 27.  Tickets will be available for purchase through https://www.pizzaexpresslive.com.