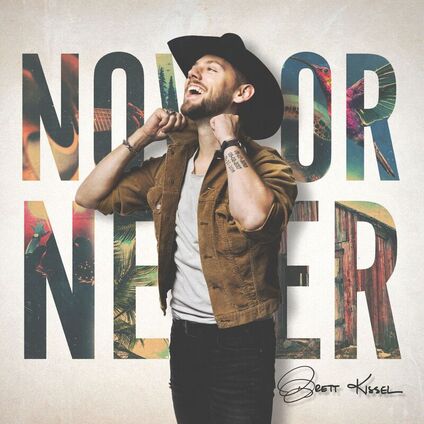 What’s the best way to welcome in a new decade? Canadian country superstar Brett Kissel came up with the best answer – release a new album at the stroke of midnight on New Year’s Day. To make this 8-track release even more intriguing, Kissel has only released the lead track, Drink About Me, before the albums release, which is going against the trend of so many artists that will almost have released each track from a new album via streaming platforms in the weeks building up. Ahead of the release of Now or Never, Kissel said “People have asked, and I know they will continue to inquire about what’s different this time around. For me, everything is. The process, the mindset, and mostly my confidence. All in all, I just wanted to destroy the box of what I thought was possible for a Country record, and I am so excited for what’s to come.”

The album opens with the lead single Drink About Me. The track was released back in September and marked Kissel’s first single release in the U.S. On its release, Kissel commented “When you hear this song, I hope you’ll reminisce about your best days, happiest times, first kiss, longest kiss and warmest embrace. Let this song surround you and let these memories come flooding back.” The song tells the tale of reminiscing over shared drinks and both fun nights in and out while wondering if the other person is still thinking about you – I hope a margarita puts you the coast with me, a cold corona takes you down to Mexico.

A Few Good Stories is about living with no regrets and living the best life that you can – when it’s all said and done, I know I lived it well when I aint got nothin but a few good stories to tell – a song that will certainly perk you up and make you giggle to yourself through your New Years Day hangover!

Kissel has said That’s Country Music is one of his favourite songs he’s ever written as he can turn to country music now matter how he is feeling – it hits the heart and soul and just feels right – Everyone who loves country music will take in ever word of the heartfelt lyrics and no doubt will be able to agree with every word and be able to think about what country music means to them, whether it be the love songs, heartbreak songs, drinking songs or driving songs.

The tempo picks back up for Young Enough as Kissel tells the listener to take every moment as it comes – take your map, tear it up, find your glass and fill your cup – so stop complaining about your first hangover of 2020 and saying you’re never drinking again!

A fan favourite from Kissel’s previous album was the sing-a-long track Anthem and Kissel claims that She Drives Me Crazy is Anthem on steroids. Seeing this live will surely be like nothing else in a Kissel live show as it will have everyone on their feet shouting along. Kissel said peoples first reaction would be OMFG and he isn’t lying. It is like no song I’ve ever heard from Brett that’s for sure.

Have you got your breath back? For those listening to the album in order, Kissel has very kindly bought the tempo back down from 100 to the much more mellow, yet still catchy Hummingbird – I let her go, because you can’t hold a hummingbird.

In October, Kissel joined Christina Taylor for the release of her new single, As Good As You Look, and for the second track on the album Christina joins Brett for I’m Not Him, I’m Not Her. The track is about having the faith to trust someone as you start out a new relationship as your worried of it ending the same way as a previous heart break whilst also hoping that person understands your worries – I’m not him, I would never even try, to do the things he did to you, I couldn’t stand to see you cry, she put your heart through so dam much that you did not deserve.

As the album closes with Coffee With Her, Kissel took inspiration for this track from none other than Johnny Cash and his infamous quote about describing his idea of paradise - This morning, with her, having coffee.” Everyone has their own idea of happiness, for Kissel though he agrees with Cash – it’s easy to describe the perfect start to the perfect day, I could say it in a couple of words, this morning having coffee with her

For Brett Kissel fans, hearing this album will be the perfect start to the new decade as they look forward to the future. The album will make you think, but most of all, it will put a smile on your face as you sing with Kissel on what is his most exciting album so far as he welcomes in fans for his next chapter.

​If you do one thing this New Years Day while curled up on the sofa, press play on the eight tracks below and it will welcome you into 2020 and get you ready for the year ahead.